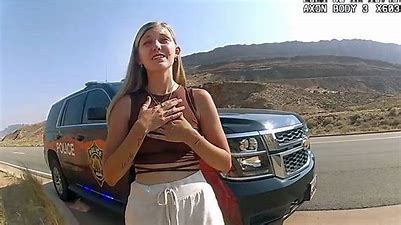 The police officer who handled the Utah traffic stop of Brian Laundrie and Gabby Petito said he was traumatized by the latter’s death, according to an independent review of the incident released Wednesday.

Eric Pratt, one of the officers shown in body-cam footage of the incident, said he was “desperately f*$#d over that she got killed,” when questioned by investigators about the Aug. 12 incident, according to the report by the Price City Police Department. “I really am. I would have done anything to stop it if I would have known that was coming.”

The 100-page report looked into how the Moab County Police Department handled the dispute between Laundrie and Petito. A formal complaint and criticism towards how to department managed the traffic stop led to the review, Newsweek reported.

Officers questioned the pair over a suspected domestic violence incident, before eventually allowing the two to depart, so long as they spent the night separate from one another and arranged for a hotel room. Petito later went missing, leading to a highly publicized search that culminated in authorities finding her dead body at a national park in Wyoming.

A coroner later concluded Petito died of strangulation. Laundrie went missing days after Petito’s disappearance was reported and his body was eventually found in a Florida nature reserve.

“I accept responsibility for it but I don’t want anyone to think that I did not care,” Pratt said, according to the report. “I am devastated about it. I cared that day and I still care.”

The report said officers had probable cause to arrest Petito after she said she had hit Laundrie first during their dispute, but that “it’s very likely Gabby was a long-term victim of domestic violence, whether that be physically, mentally, and/or emotionally.”

It concluded the officers made numerous unintentional mistakes as a result of not citing Petito for domestic violence, while also acknowledging it is “an impossible question to answer” if she would be alive had the officers handled the situation differently.

“It’s really convoluted and hard to tell you like anything other than what I thought at the time which was if I missed a big red flag that he was a murderer, then yes I missed it,” Pratt told investigators, according to the report. “If I would have known he was going to murder her, I would have taken vacation to follow them, because I care about people.”