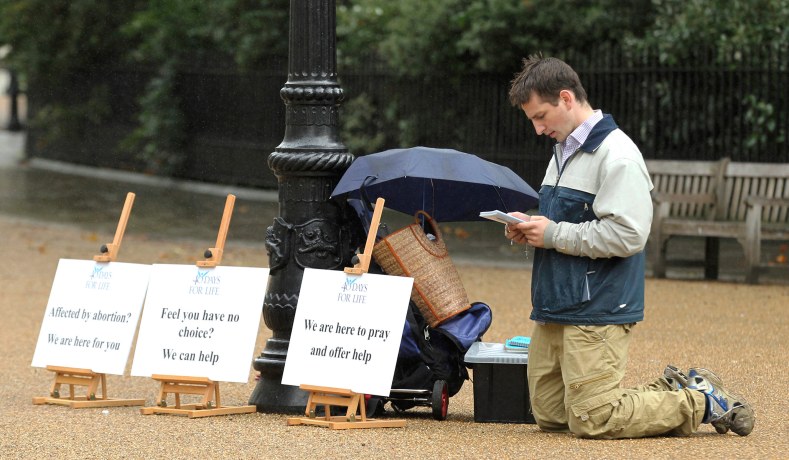 Do you know about 40 Days for Life? It’s a campaign of prayer outside of abortion clinics. I’ve been trying to stick with it most days, often signing up for a slot at 3 in the afternoon on weekdays. I quickly learned that 3 is an especially hard time. At this particular clinic, the girls (and really, that’s who I see — I’m not questioning that they are at least 18, but they are so young) are leaving the clinic after what seem to be 1:30ish abortion appointments. It’s such a miserable scene. They do not look empowered. They look like they don’t want to face the world again. They look like something awful and traumatic and unnecessary and wrong has happened. Yes, they look as if they are numb to grieving. Death is so clearly real there, even if it cannot be acknowledged.

The other day, one girl dug her face into her friend as they waited for an Uber, looking to be in such emotional pain. Yesterday, another got into the passenger seat of a car and put her seat all the way back, shaking her head as her boyfriend drove away. A few weeks ago, a girl actually ran away from the clinic — and she wasn’t in there long enough for an abortion to have happened. On that particular Saturday, there was a group of people praying, and she had taken a pro-life brochure — maybe the thought of alternatives penetrated.

These young women deserve better than all the pressures there are to abort.

A month or two ago, a woman was waiting for her boyfriend, who was late. There were two men with a megaphone talking about the slaughter of babies. This is not the message for a woman who has just had an abortion. I wanted to weep with her. She was furious when her boyfriend finally showed up. That poor woman. She was a little bit older than some of the ones who look to be 19, 20, 21, maybe 22. She didn’t seem to be wearing empowerment either, just misery.

Sometimes I notice the boyfriends bonding as they wait for their girlfriends to come out. I heard one recently ask if he’d been here before and how long it takes. He had been — about an hour and a half. They don’t look happy to be there, but seem to stand believing this is what must be done, this is what men do — wait outside the abortion clinic. After all, everybody but that crazy lady praying across the street (and Trump supporters?) says it’s women’s health care and her choice. I want to show them all the Into the Breach videos from the Knights of Columbus. Here’s the one on life:

This morning, I was there to pray a Rosary closer to opening time and saw the girls going in. One ran into the door from the subway a block away. One stayed in her car, playing with her hair — almost tearing at it — seeming to look for any reason not to go in. One was hesitant and seemed so obviously an innocent who had been robbed. There were pro-life girls near the door, and she took their literature. Another didn’t want the literature, and had a Ruth Bader Ginsberg tote bag around her arm.

If Planned Parenthood is a beacon of freedom, it sure doesn’t show as the girls are walking in and out. And, yes, so many of them are black. Black lives do matter. Which is why anyone with a Black Lives Matter sign should make sure there is no woman of any race who feels like she has to have an abortion because she does not have the resources to bring her child into the world.

And consider praying outside an abortion clinic. Peacefully, across the street. Don’t obstruct. Beg God for His mercy and for miracles.

Praying outside an abortion clinic changed this young women’s life, and now she’s a Sister of Life:

More information on the 40 Days for Life campaign can be found here.

I talked to a woman today who takes a lot of abuse for her Pray to End Abortion sign she holds while praying. She insists that as the campaign goes on, more women turn around and seek help. My dream is to be able to take a gal of her own free will to the Sisters of Life, not too far away.

Pray, wherever you are, for an end to abortion. That women really have what they need to be mothers, including to choose an adoption plan, if that is best. Birth mothers are heroic, as BraveLove does a wonderful job making clear.

Stop the steal: New Hampshire have identified numerous actions by the...