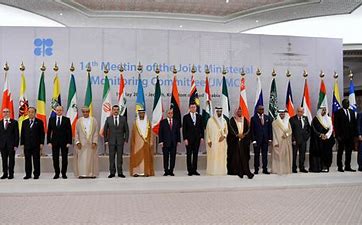 The speculation earlier this week was that OPEC+ was going to cut oil output by 1 million barrels a day, and the Biden White House was described as being in “a panic” about this prospective move, because gasoline prices are starting to soar again just in time to help tip the midterm election further in favor of Republicans.* CNN reported:

The Biden administration launched a full-scale pressure campaign in a last-ditch effort to dissuade Middle Eastern allies from dramatically cutting oil production, according to multiple sources familiar with the matter. . .

On Wednesday morning, OPEC+ oil ministers meeting in Vienna agreed to an even larger production cut than the White House had feared — 2 million barrels per day, beginning in November, according to a readout of the meeting released on Wednesday. The ministers said the cuts were necessary “in light of the uncertainty that surrounds the global economic and oil market outlooks.” . . .

Some of the draft talking points circulated by the White House to the Treasury Department on Monday that were obtained by CNN framed the prospect of a production cut as a “total disaster” and warned that it could be taken as a “hostile act.”

The White House is “having a spasm and panicking,” another US official said, describing this latest administration effort as “taking the gloves off.”

So much for the “smart diplomacy” the Biden crew promised us in place of the bumptious Trump. Those gloves they took off are probably the same soft white gloves they’ve been using in their (fortunately) fruitless Iran negotiations. With Biden having recklessly depleted our Strategic Petroleum Reserve, he doesn’t have any cards left to play to offset this OPEC move. For its part, OPEC may well be anticipating a significant global economic slowdown, which may have already started by some indicators. OPEC is also skillful in price theory, understanding how to maximize their revenues according to a price curve that is more predictable when the U.S. deliberately suppresses its own oil production potential because of c—– ch—-.

* As noted here over the weekend, the change in gasoline prices in just five days: