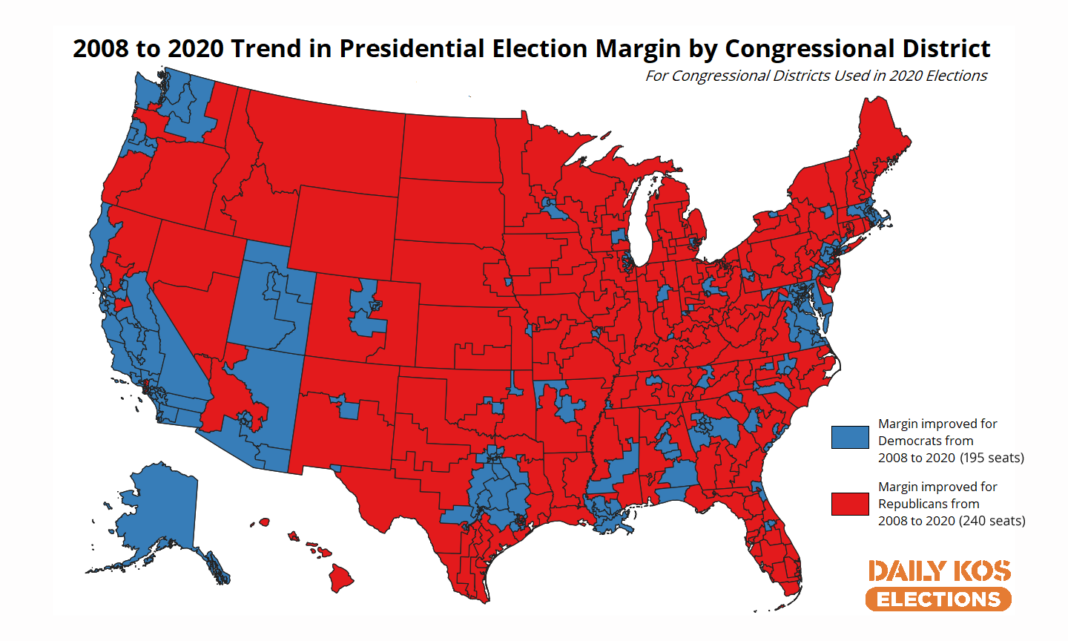 In our first map shown at the top of this post which shows every district equally sized (you can find a larger version here), we’re taking a simple approach to the question: Did each district get redder or bluer at the presidential level, over the period from 2008 to 2020?

(You can find all the underlying data, which we’ve calculated ourselves, in this Google spreadsheet. These reflect the results as they would have been under current district boundaries, which allows for a truly apples-to-apples comparison.)

What might leap out the most to you is California, which is nearly entirely blue. Forty-five out of the most populous state’s 53 districts had a larger Democratic margin of victory (or smaller Republican margin) in 2020 than in 2008. That, of course, doesn’t have a big impact on the Electoral College since California has been a reliably blue state since the 1990s.

It’s mattered a great deal downballot, though, as it’s only become one of the bluest states in the last decade. In fact, given California’s huge population, it goes a long way toward explaining how in both 2016 and 2020 Democratic candidates ran up the score in the popular vote nationwide while things stayed close in the tipping point states that determined the electoral vote.

You may also notice a lot of blue in Colorado and Virginia, two states that rapidly evolved from red in the early 2000s to blue now. But perhaps more importantly, check out both Georgia and Arizona, the latter of which almost entirely trended in the Democratic direction, except for the retiree-heavy 4th district.

And most importantly, the same thing you see in Arizona and Georgia is also happening in Texas. This is much more visible in a cartogram map like this rather than a standard projection, because it unpacks the heavy concentration of voters in the nation’s metropolitan areas.

In the same way that the Atlanta metropolitan area accounts for over half of the state’s voters but only a fraction of its landmass, with the cartogram you can see how the Dallas, Houston, Austin, and San Antonio areas all have trended blue over the last decade. The Texas Panhandle (always dark red) and the Rio Grande Valley (blue, but decidedly less so in 2020) went in the Republican direction, but together they’re only a small part of the state.

To illustrate the difference, here’s what the same data looks like in the more “normal” map (with a larger version here). You can see why we prefer the cartogram-style map; it’s hard to make out what’s happening in the nation’s urban areas, where the Democratic trend is concentrated.

For Democrats, the unfortunate flipside of the trend in Arizona, Georgia, and Texas is the pattern in Midwestern states like Michigan, Ohio, and Wisconsin, where the 2008-to-2020 trajectory has mostly been in the red direction. There are two issues at work here: one, these states are whiter than the Sun Belt states and not diversifying as quickly, and two, they have much larger rural or small-town populations than their Sun Belt counterparts, where the bulk of the population is urban or suburban.

On top of that, some of the region’s major cities like Detroit and Cleveland also saw a decline in Democratic performance. That was down from an exceptional high during Barack Obama’s elections and in fact only a few percentage points lower at that, but obviously every vote is crucial in close swing states.

The most alarming red-hued state, though, may be Florida, where the 2020 margins were worse almost everywhere, with the exceptions of the Orlando area (the 7th and 10th districts), Jacksonville (the 4th), and central Miami (the 27th). Biden’s performance among Cuban and South American communities, most significantly in the 25th and 26th districts, represented a sharp U-turn from a decade’s worth of progress, and while he did manage to improve over 2016 with the state’s various retirement-oriented areas, it was still insufficient relative to Obama’s earlier performances.

One thing to note, though, is that just because a district became bluer over this 12-year period doesn’t necessarily mean it currently elects a Democrat to the House today, and vice versa. Among the 195 districts in that got bluer, 133 are held by Democrats while 62 are represented by Republicans. Conversely, of the 240 districts that grew redder, 151 elected Republicans last year while 89 send Democrats to Congress.

If you’d like a little more nuance on this map, we’ve put together an alternate version that breaks the 2008 to 2020 shifts down into buckets with different shades of red or blue. In this version, the changes in California and Florida look less dramatic, while it really emphasizes the scope of the reddening in rural parts of the Midwest, or the blue shift in the suburbs of Sun Belt cities. (You can see a larger version here. You can also click through to a larger version of the non-cartogram version of this map too.)

The most common permutation, shown in yellow on this map, is districts that became redder from 2008 to 2012, redder again from 2012 to 2016, and bluer from 2016 to 2020. This shouldn’t be too surprising, because that’s what happened to the country as a whole over the course of twelve years: Barack Obama defeated Mitt Romney by a smaller margin in 2012 than he did John McCain in 2008 (4 points versus 7); Hillary Clinton’s 2-point margin was even smaller in 2016 (enough, of course, to lose the electoral vote); and Joe Biden’s 4-point win was larger in 2020.

You might be surprised how few places got subsequently bluer, bluer, and bluer (or vice versa), but keep in mind that any such district would have had to buck national trends at least once. One unsurprising example of a place that kept getting bluer each time, though, is northern Virginia (in the 8th and 11th districts). Contrast that with Hawaii, which despite staying very blue the entire 12-year period, got redder each of the three times. That’s not too surprising either, though, as Barack Obama’s “favorite son” effect gradually wore off.

The second most common permutation is redder/bluer/bluer, colored green on our map, i.e. where Romney improved on McCain, but where Democratic fortunes improved in 2016 and kept improving in 2020. This is especially common in affluent suburbs and—this is becoming a common theme— particularly in Arizona, Georgia, and Texas. Importantly, it was also the case in the Philadelphia ‘burbs, which were crucial to Biden’s statewide win in Pennsylvania.

The third most common permutation after that is bluer/bluer/redder, the total opposite of what the country as a whole did (shown in pink on the map). It did show up often, however, in areas with large Latino populations, where Clinton was disproportionately strong and Biden less so. You can see it, as you might expect, in south Florida and the Rio Grande Valley, it also pops up throughout the Los Angeles area and California’s Central Valley. This, of course, had little impact on the presidential race overall in California, but you can see it having some coattail effects in the handful of swingy House districts that Democrats lost in the Golden State in 2020.

Finally, for comparison purposes, here’s the eight-color map in its “normal,” non-cartogram form (with a larger version here).