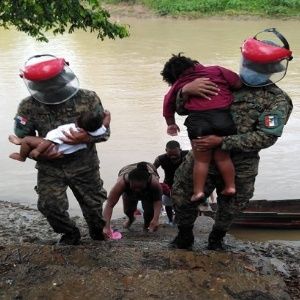 Panama’s Ombudsman Eduardo Leblancha reported that over 10,000 migrants were at the border with Colombia waiting to cross into his country to continue their journey to the United States.

Leblanc noted that these people were provided with food and temporary shelters for medical examinations. The migrants were classified by origin to determine if migratory agreements apply with origin countries or refugee status.

The migratory flows detected by the Panamanian authorities come from countries on several continents. Among them, for example, are Haiti, Bangladesh, and the Republic of Congo.

Migrant women are three times less likely than men to be identified after death. In 2020, we documented 335 women dead or missing during migration worldwide. The real number of women who have perished during their migration journey is likely to be much higher. #IWD2021 pic.twitter.com/YQmP6B5msb

On Apr. 26, Panamanian authorities and the Ombudsman’s Office will meet with Colombian counterparts to address the situation at the border and negotiate a migration agreement.

SENAFRONT director Oriel Ortega warned of the presence of unaccompanied children. He also decried that criminal organizations deceive the migrants, who risk their lives on the journey through the Darien jungle, considered the most dangerous illegal crossing in the region.

Last month, a report by the United Nations Children’s Fund (UNICEF) revealed that the number of children and adolescents crossing the jungle from Panama to the U.S has increased fifteen-fold since 2017.