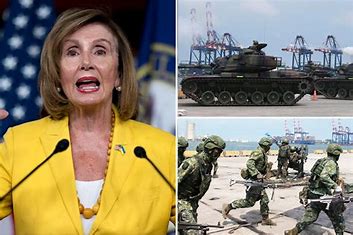 Speaker Nancy Pelosi hasn’t committed to the trip yet, at least not publicly, but there are hints she is planning to move forward with it despite warnings from the White House and the Pentagon. USA Today reports she’s inviting GOP lawmakers to join her.

Pelosi’s office has not confirmed her travel plans, citing security concerns. But the California Democrat invited several Republican members of Congress to travel to Taiwan with her, according to a source familiar with the discussions and one of the GOP lawmakers.

“Rep. McCaul was invited on the trip, but is unable to attend due to a prior commitment,” Leslie Shedd, a spokesperson for the House Foreign Affairs committee ranking member, said in a statement to USA TODAY.

Meanwhile China continues to make vague threats. Chinese spokesman Zhao Lijian said, “If the U.S. side insists on making the visit and challenges China’s red line, it will be met with resolute countermeasures.” China isn’t saying what those countermeasures would be but a former state media commentator with a nationalist bent suggested last week that the PLA would “punish” her make her visit a “disgrace.”

Biden is supposed to have the ability to prevent the reckless visit of Pelosi, rather than “I don’t know what the status of it is.” If the US can’t restrain her, let China restrain her & punish her. PLA Air Force will surely make her visit a disgrace to herself and to the US.

He earlier suggested his own idea which involved China’s air force escorting her plane to Taiwan.

My suggestion to Chinese govt&military: If Pelosi visits Taiwan, PLA military aircraft will accompany Pelosi’s plane to enter the island, making a historic crossing of the island by military aircraft from mainland for the 1st time. Its significance would overwhelm Pelosi’s visit. pic.twitter.com/Hiv6pMFOwO

It would be very risky for China to send fighter planes toward Pelosi’s plane. But that’s not likely to happen. Today the Pentagon said that if Pelosi does make the trip, they will adjust to ensure she’s protected.

Asked about planned military steps to protect Pelosi, D-Calif., in the event of a visit, U.S. Gen. Mark Milley, chairman of the Joint Chiefs of Staff, said Wednesday that discussion of any specific travel is premature. But, he added, “if there’s a decision made that Speaker Pelosi or anyone else is going to travel and they asked for military support, we will do what is necessary to ensure a safe conduct of their visit. And I’ll just leave it at that.”…

U.S. officials say that the prospects of an intercept or show of force by Chinese aircraft near Pelosi’s flight raises concerns, prompting the need for American aircraft and other assets to be nearby.

The U.S. aircraft carrier USS Ronald Reagan and its strike group is currently operating in the western Pacific, and made a port call in Singapore over the weekend. The strike group involves at least two other Navy ships and Carrier Air Wing 5, which includes F/A-18 fighter jets, helicopters and surveillance aircraft.

All of this, on both sides, seems aimed at making enough noise that Pelosi decides to cancel the trip. Maybe that will still happen but that would clearly be a win for China at this point.

“It’s a tough call for the administration,” said Michael Green of the Center for Strategic and International Studies in Washington, who helped shape Asia policy as a senior official in the George W. Bush administration.

“If they pressure Pelosi to back down, they will invite greater Chinese threats and pressure in the future and increase the odds of a crisis again down the road,” he said. However, he said, “if they support her going, they risk escalating tensions in the Taiwan Strait.”

“They’ve got to find an elegant resolution,” he added.

I’m not sure there is an elegant solution here. China is being belligerent and demanding we behave as if Taiwan is their territory and we’re invading when in fact Pelosi’s visit would be welcome by the elected leader of Taiwan and by the overwhelming majority of its people who oppose “reunification” with the mainland. If she backs off now, that strengthens China’s hand the next time they make a similar demand. But this isn’t the Cuban missile crisis. Speaker Pelosi is an obnoxious Democrat but she’s not a nuclear warhead. There’s no reason for the US to act as if this is an outrageous visit just because China is outraged. It’s not up to them and hopefully it never will be.

L.A. school district may mandate vaccinations for all students