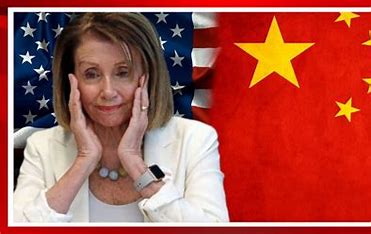 As Jazz pointed out yesterday, President Biden made a remark this week that seemed to indicate Speaker Pelosi’s planned trip to Taiwan was a bad idea. Biden didn’t actually he felt that way. Instead he said “the military” didn’t think it was a good idea.

At this point I was left wondering whose military Biden was talking about. We know that China doesn’t want Pelosi to go. They’ve been making veiled threats about this for months, ever since a previously planned trip to visit Taiwan was canceled back in April.

China reacted angrily, warning the US against the trip and demanding that Washington “adhere to the One China principle”.

Foreign ministry spokesman Zhao Lijian said China “will have to take determined and forceful measures to firmly safeguard national sovereignty and territorial integrity” if the visit went ahead.

Bonnie Glaser, a Taiwan expert at the German Marshall Fund, said Beijing had become “hypersensitive” about Congress, which has introduced an “unprecedented” number of anti-China bills in recent years.

But it turns out that Biden was right. Pelosi has been hearing from the US military about the trip, which has been rescheduled for next month:

Behind the scenes, White House and Defense Department officials have already been quietly relaying the risks of a potential trip to Pelosi’s office, according to three people with knowledge of the discussions. But since news of the trip emerged on Tuesday, the president’s public comments have ramped up pressure on the speaker to address those concerns.

Inside the Pentagon, officials believe the trip could increase tensions in the region as Beijing ratchets up rhetoric and flexes its muscles in the South China Sea. Pelosi is planning to use a military aircraft to fly to the island, which is standard for congressional delegations. But to the Chinese, “it looks like a military operation,” said one U.S. official, speaking on condition of anonymity to discuss a sensitive topic.

CNN published a story yesterday with a more specific rationale. The Pentagon apparently believes Pelosi’s visit could be used by China as an excuse to declare a no fly zone over the island:

Biden administration officials are concerned that China could seek to declare a no-fly zone over Taiwan ahead of a possible visit by House Speaker Nancy Pelosi as an effort to upend the trip, potentially raising tensions even further in the region, a US official told CNN.

China could also respond by flying fighter jets further into Taiwan’s self-declared air defense zone, which could trigger a response from Taiwan and the US, the official added. They did not detail what a possible response would entail.

To her credit, Pelosi has so far refused to back down.

“It’s important for us to show support for Taiwan,” she said. “None of us have ever said we’re for independence when it comes to Taiwan. That’s up to Taiwan to decide.”…

“I don’t always agree with her, but on this one I applaud it,” Rep. Michael McCaul of Texas, the top Republican on the House Foreign Affairs Committee, said in an interview. “It’s important that we show up in Taiwan and demonstrate to China that we are supportive. That’s a very strong statement for a speaker to go to Taiwan.”

Today, Henry Olsen wrote an opinion piece for the Washington Post listing some of the reasons she should make the trip:

Our Asian allies look to us to defend them against China’s threat, and a visit by Pelosi would signal that Taiwan’s quest to remain free is supported by top U.S. leaders. She would not need to say anything that contradicts prior U.S. policy, which has historically been ambiguous as to whether it would go to war to defend Taiwan if China invades. Her presence would simply send a message that within that ambiguity, the balance tilts toward Taiwan…

If Pelosi’s visit pushes China to make a threatening move short of war, such as moving substantial military assets in position to invade Taiwan, that would force the United States to make good on our word and invest more in our military. It’s better we understand the costs of our aspirations and start to pay for them now rather than kick the can down the road again…

It would also be bad for U.S. policy if Pelosi now failed to visit the island in the face of Chinese bullying. Our allies have increasingly asked us to make clear commitments to defend Taiwan if China attacks. Nations such as Japan would surely view Pelosi canceling her visit as a sign that the United States is unwilling to test China’s resolve. That sends a message of weakness.

China’s Xi Jinping has vowed to reunify the island by any means necessary. If we’re serious about not letting Taiwan become the next Hong Kong then the sooner we stand up to China’s bullying the better. Canceling this trip now isn’t just kicking the can down the road, it will be seen as a sign of US weakness and will only encourage more Chinese belligerence in the very near future.