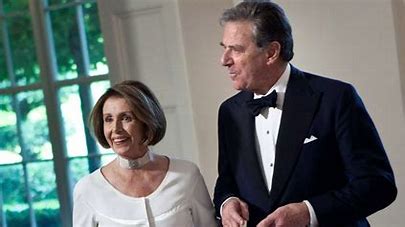 Congress is scheduled to vote on a $52 billion dollar subsidy to the semiconductor industry this week, perhaps on Tuesday. The subsidy is a part of a bill to increase U.S. manufacturing of computer chips to decrease reliance on China. It will increase American competitiveness with China. A funny thing happened on June 17. Paul Pelosi, the husband of Speaker of the House Nancy Pelosi, scored a pretty sweet purchase of between $1 million and $5 million shares in Nvidia, a semiconductor company. He purchased 20,000 shares, according to the disclosure filing.

There’s nothing to see here, why do you ask? Nancy Pelosi doesn’t know a thing about this so there can’t be anything fishy about the transaction. That’s what her office would have you believe.

“The Speaker does not own any stocks. As you can see from the required disclosures, with which the Speaker fully cooperates, these transactions are marked ‘SP’ for Spouse. The Speaker has no prior knowledge or subsequent involvement in any transactions,” Nancy Pelosi’s spokesman, Drew Hammill, said in a statement to FOX Business.

“The Speaker believes that sunlight is the best disinfectant. The Speaker has asked Committee on House Administration Chair Zoe Lofgren to examine the issue of Members’ unacceptable noncompliance with the reporting requirements in the STOCK Act, including the possibility of stiffening penalties,” Hammill said.

“To be clear, insider trading is already a serious federal criminal and civil violation and the Speaker strongly supports robust enforcement of the relevant statutes by the Department of Justice and the Securities and Exchange Commission,” he added. “The Speaker led the House in passing the bipartisan Courthouse Ethics and Transparency Act, which would subject federal judges to similar disclosure requirements as those in the STOCK Act. President Biden signed this bill into law in May.

See, it’s not her stock, it’s his stock. Except for the fact that San Fran Gran and Paul live in California, a community property state. Any property or assets acquired by spouses during a marriage is considered marital or community property. There may be nothing illegal with Paul’s stock purchase but it sure does raise some ethical questions about the timing of the purchase.

Here’s the thing – if this was a one off kind of thing it may not look so shady. But, it’s not. Mr. Pelosi’s financial transactions in the stock market and his profits from timely stock trades have been the subject of discussion for years. Whether it was a company tied to Paul Pelosi receiving a loan from the $669 billion Paycheck Protection Program, or a tidy payday after Google parent Alphabet’s stock popped, and back in 2011, 60 Minutes did a story on insider trading among members of Congress, including Pelosi. This isn’t a new concern.

Pelosi was reluctant to put bills through that would ban members of Congress and staffers from trading stocks until recently when the pressure just got too much for her. As Ed wrote about back in February, “unwanted and unexpected transparency on Pelosi’s trades forced her to shift her position on rules changes, reluctantly.” And, yet, here we are again. Rep. James Comer (R-KY) said that Nancy Pelosi is the ultimate insider.

Comer called Nancy Pelosi “the ultimate insider,” noting how her husband has made other controversial stock purchases before, namely ahead of the Big Tech hearings on Capitol Hill.

“Nancy Pelosi is the ultimate insider. Not only is her husband buying stock options on a much higher level than the average member of Congress,” Comer said. “The average member of Congress may buys $5,000 or $6,000 of stock. He’s buying $500,000 worth of stock. He’s buying stock options which expire. To be able to trade stock options profitably, you have to know exactly which direction that stock’s going to move, and you can make a huge profit. This is wrong. This is another example of the media turning a blind eye to Nancy Pelosi’s bad behavior and unethical behavior.”

Nancy Pelosi leads a life of privilege. She and her husband think they are untouchable. It is simply ridiculous to think that her job has nothing to do with his financial dealings. Paul Pelosi also made a couple of other stock trades with Apple and Visa recently that reaped profits.

Keeping Children in Masks is appropriate