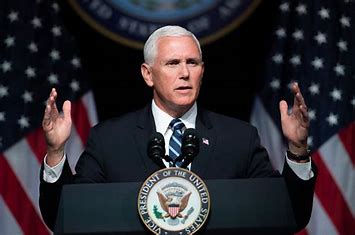 Former Vice President Mike Pence Saturday expressed confidence the Supreme Court will overturn Roe. v. Wade — thanks to the newest conservative justices — and urged anti-abortion activists to prepare for action once the decision comes down.

Pence predicted the Supreme Court will act to dismantle the landmark abortion case, adding the “next battlefield for life will emerge” in the state legislatures.

“Your generation must lead and fight for life in every state across this land,” Pence said Saturday at the National Pro-life Summit in Washington, D.C., where many students and grassroots activists had gathered.

“With a real prospect of a post-Roe America before us, I urge you to prepare your minds for action,” Pence added.

Pence made his comments on the 49th anniversary of the Roe v. Wade Supreme Court decision that legalized abortion. Buoyed by the addition of three new conservatives on the court – justices Neil Gorsuch, Brett Kavanaugh and Amy Coney Barrett – and a major abortion case before the justices, anti-abortion activists are hopeful the Roe court decision will not live to see its 50th anniversary.

If the court overturns the long-standing abortion precedent in Roe v. Wade and Planned Parenthood v. Casey – two landmark cases that prevent state governments from banning abortions at certain points during pregnancy – then abortion decisions would be left to the states. Several red states, for example, have already passed “trigger laws” designed to immediately restrict abortion once the Supreme Court overturns Roe.

With all this at stake, energized anti-abortion activists flocked to Washington this week for the annual March for Life on Friday and the summit on Saturday. Pence reiterated the rallying cry, saying “Roe must go!”

During his speech, Pence said the Trump administration was the “most pro-life administration in the history of the United States” and touted former President Trump’s appointment of more than 300 conservatives to federal courts, including Gorsuch, Kavanaugh and Coney Barrett.

“Pray that the conservatives on our Supreme Court will have the courage of their convictions,” Pence said.

The former vice president and Indiana GOP governor thanked activists for working hard to end abortion and said he now believes the Supreme Court is on their side.

“The pro-life generation has never been stronger. And, thanks to all of you, life is winning in America again,” Pence said. “And never doubt the American people are on our side. I believe the majority of the highest court in the land is on our side as well.”

Support for toppling Roe v. Wade is at a new high, according to a Fox News poll of registered voters released Friday, yet twice as many voters still want it to stand.

On the eve of the 49th anniversary of Roe v. Wade, the poll found 31% want to see the Supreme Court overturn the landmark abortion case, up slightly from 28% in September.

The Supreme Court heard oral arguments in December on a Mississippi abortion law mostly prohibiting the procedure after 15 weeks of pregnancy, a challenge to the decades-old Roe case. A ruling is expected later this year.

Sixty-three percent prefer to let the landmark case stand, down slightly from 65% four months ago. Almost half of Republicans want the case to stand (48%) along with about seven in ten Democrats (72%) and independents (73%).

Pence talked of the “heartbreaking consequences of the Roe decision,” noting an estimated 62 million Americans were lost due to abortion. He urged the court to send “Roe v. Wade to the ash heap of history – where it belongs.”

“We are asking the court in no uncertain terms to make history,” Pence said. “We are asking the Supreme Court of the United States to overturn Roe v. Wade and restore the sanctity of life to the center of American law.”

Victoria Balara and Sam Dorman contributed to this report.

U.S. Military is discharging service members who refuse to get vaccinated

Politics May 27, 2022
The title of the page
Go to mobile version