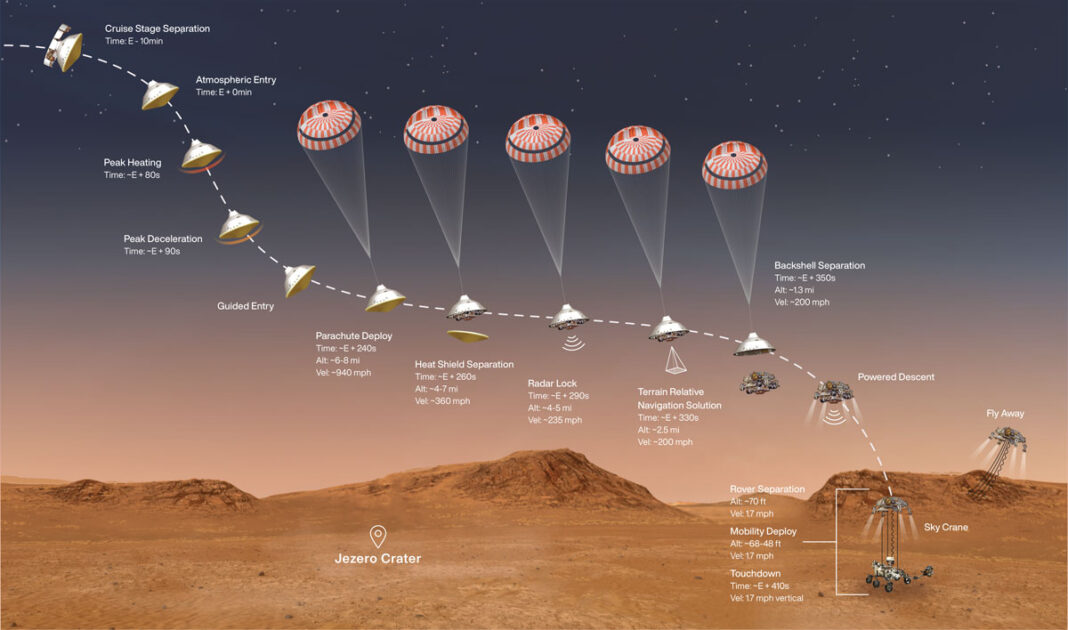 While other rovers have occasionally looked for signs of life on Mars, that’s the main task for Perseverance. With hugely improved cameras, a whole suite of new instruments, and a system for not just taking rock samples but storing them away for later (possible) return to Earth, Perseverance is ready to bring back images that blow away everything that’s come from its sturdy and long-lived predecessors. In addition, Perseverance is also packing a new set of microphones that will not only return sounds from the planet’s surface, but the sounds of the landing itself. However, there is a little bit of a caveat: The best images and sounds from the landing can’t be sent back until after the landing because of bandwidth constraints on sending data back from so far away. That means that to get really good video, images, and sounds of the landing, Perseverance will have to survive the landing.

And there’s also an exciting hitchhiker on board—Ingenuity, the Mars helicopter. Ingenuity is facing a tremendous challenge as the lightweight drone attempts to fly in Mars’ extremely thin atmosphere (though it won’t actually be the first flying probe on another planet, as the Soviet Union floated two balloons over Venus). The purpose of Ingenuity is, more or less, to see if it works. It can take images, but it’s really more of a test bed for designing future Mars fliers. Think of it as the plucky little Sojourner of space drones.

NASA’s live broadcast of the event has already started, with experts reviewing what to expect and missions scientists white-knuckling their way toward that crucial landing. Even though NASA pulled this off once before with Curiosity, landing on Mars is difficult. A perfect repeat performance is absolutely not a guarantee.

What to expect from the “seven minutes of terror”

And if you’re wondering about the weather today on Mars, Curiosity currently gives the temperature as a high of 3°F and a low of -99°F. Even though Perseverance won’t be landing at the same spot, it’s safe to say that it will be colder than Texas.

Afghanistan: Al-Qaeda terrorists are in Kabul to form a New gov’t

Taliban: Biden must leave Afghanistan by August 31 or else there...