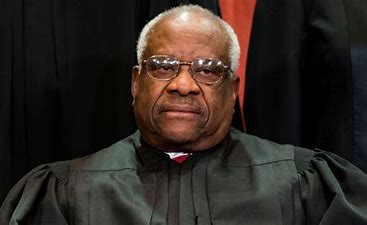 In Biden’s America, the Democrat playbook is to tear every national institution down. One example is how the left is reacting to the overturning of Roe v Wade after the Supreme Court’s ruling on Dobbs v Jackson Women’s Health. Since the Court returned abortion law back to the states, where it was before 1973 when the Supreme Court made up a constitutional right to abortion, the left has let loose with some radical reactions. One is calling for the impeachment of Justice Clarence Thomas.

The left has been angry at Justice Thomas since he was nominated to the Supreme Court. He’s a black conservative so they set out to destroy him. Joe Biden did his part back in the day as a member of the Senate Judiciary Committee. He voted against the nomination when it was put to a vote in the Senate. Thomas was confirmed by a narrow majority with a vote of 52-48. Between his televised hearing which turned into an absurd circus, and the way Robert Bork was treated during his nomination, the importance of the Supreme Court has weighed heavily on how I view presidential elections.

As of Saturday morning, more than 800,000 people have signed an online petition organized by MoveOn for the impeachment of Clarence Thomas. MoveOn is a left-wing organization that began during the days of the Clinton impeachment vote. The irony in their name is that the organization only wants conservatives to ‘move on’ from criticizing liberal actions. It only goes one way. Justice Samuel Alito wrote the majority opinion in Dobbs v Jackson Women’s Health, not Justice Thomas.

The petition noted that Thomas was among the majority of justices who ruled that there was not a constitutional right to an abortion and alluded to his concurring opinion in that case, in which he suggested the Supreme Court should revisit cases that established the right to contraceptive access and same-sex marriage.

The petition also blasted Thomas for not recusing himself in cases relating to the Jan. 6, 2021, Capitol riot after news reports surfaced that Ginni Thomas had reached out to Arizona state lawmakers urging them to reject the 2020 election results and had contacted former White House chief of staff Mark Meadows over rejecting the last election’s outcome.

“Thomas’ failure to recuse himself warrants immediate investigation and heightened alarm. And it’s only the latest in a long history of conflicts of interest in the service of a right-wing agenda and mixing his powerful role with his conservative political activism,” a statement on the petition page reads.

“He has shown he cannot be an impartial justice and is more concerned with covering up his wife’s coup attempts than the health of the Supreme Court. He must resign—or Congress must immediately investigate and impeach.”

It was the minority dissent that brought up possible denial of contraceptive access and same sex marriage, not the majority, The left is using scare tactics that include talking about the loss of those freedoms as next on the Court’s agenda with conservative justices.

The usual suspects began calling for the removal of Thomas from the Court, including impeachment, if necessary. Rep. Alexandria Ocasio-Cortez called for Thomas’ impeachment last weekend on Meet the Press.

Professor and liberal attorney Jonathan Turley writes today in The Hill that revolution is in the air. He references actor Mark Ruffalo who said the Supreme Court is “a political tool for the extremist, fascist faction of the GOP” and “we must revolt.” Apparently Ruffalo prefers his fascism to come from the Democrats. He essentially says that the left is losing its mind because some rulings are not going their way.

On this July 4 weekend, revolution again seems to be in the air. Even before the recent decision overturning Roe v. Wade, congressional Democrats like Sen. Jeanne Shaheen (D-N.H.) warned the Supreme Court to reaffirm Roe or face a “revolution.”

After major rulings on gun rights, abortion and climate change, Democratic leaders and pundits declared the court to be “illegitimate.” Democratic leaders seem to have time-warped back to the time before Marbury v. Madison in 1803, when the court ruled that it must be the final arbiter of what the law means.

Sen. Elizabeth Warren (D-Mass.) not only renewed her previous call to pack the court but said the court was illegitimate for rendering decisions against “widely held public opinion.” Rep. Eric Swalwell (D-Calif.) said the court “defies the will of the people.” Reporter John Haltiwanger insisted that “the court is clearly not representative of the U.S. public. It’s supposed to be the people’s court.”

That’s the point, reporter Haltiwanger, as Turley points out, the Supreme Court was never meant to be the people’s court. It is the Constitution’s court “designed to be able to stand against everyone and everything but the Constitution. In a system designed to protect the minority, the court (like the Constitution) is counter-majoritarian in much of what it does.” Saying it is the people’s court is as silly as saying the Court should bow to public opinion or the will of the people. “Read the room” does not apply. Democrats don’t like the minority being protected when they control the majority. We’ve seen that not just with Supreme Court rulings but also in their desire to tear down the Electoral College system.

From the most extreme, we hear calls to just ignore the Supreme Court.

Former MSNBC host Keith Olbermann declared that it “has become necessary to dissolve” the Supreme Court, adding: “The first step is for a state to ignore this ruling. You’re a court? Why and how do [you] think you can enforce your rulings?”

Rep. Maxine Waters (D-Calif.) as usual put it succinctly by yelling in front of the court: “The hell with the Supreme Court. We will defy them.”

And, for all their rage, little is accomplished. Cooler heads prevail from the majority of Americans. Rage compels action, not reason. “We are becoming addicted to rage, and these leaders traffic in rage to a junkie nation.” That is why Biden is piggybacking on the left’s dramatic rages and turns his speeches criticizing the Supreme Court’s decision in Dobbs into a get out the vote rally. The left is hoping the Dobbs decision will stop the red wave coming in November. It remains to be seen but if I have to guess, I’d say the Ruffalos and AOCs of the country will be disappointed once again. As far as the revolution goes, count Turley out.