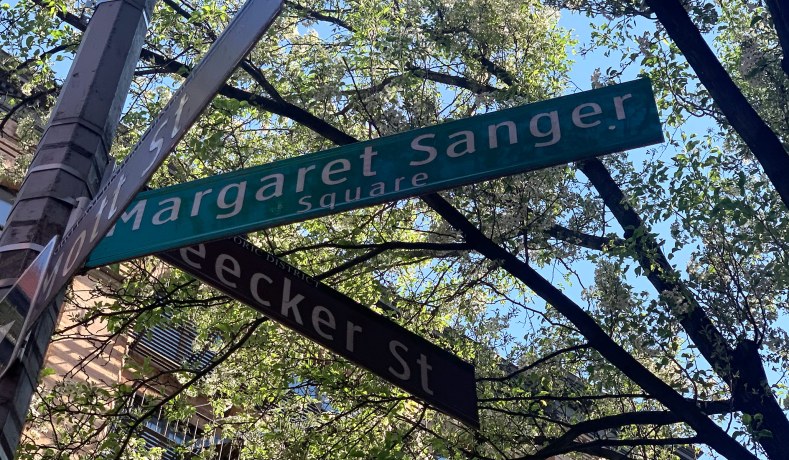 This morning, I took the above picture of Margaret Sanger Square outside Planned Parenthood of Greater New York. Over the weekend, Alexis McGill Johnson, wrote an op-ed “We’re Done Making Excuses for Our Founder.”  (As Alexandra DeSanctis writes about here.) But she missed the full need to reckon with Sanger. Yes, racist eugenics. She wrote about “the many types of dehumanization we are seeing right now.” She named Adam Toledo, Daunte Wright, Breanna Taylor, and George Floyd. She can’t name the unborn, developing children who were killed by Planned Parenthood today, last week, all throughout the pandemic. When I pray or sidewalk counsel at or across the street from Margaret Sanger Square, I am overwhelmed by how many of the girls are black and under 18. I’m only seeing a bit of it, and not all of the girls and women are going in for abortions, but we have seen stats in recent years that in certain areas of the city, there are more black abortions than births.

The girls I’ve encountered who are going in for abortions — or the cruel abortion pills — are scared, they are not exercising “autonomy,” it is not a choice. They are being pressured and don’t think they have any other option. One gal last week wound up coming out before the abortion after her boyfriend encouraged her to, having talked with a pro-life sidewalk counselor. She left that day, but it would take a miracle for her to go through with the pregnancy, as she explained the fear she had because of her mother. These are just a few windows into what I would not be the first to call a black genocide. Black unborn lives do not matter at Planned Parenthood when an abortion is being recommended or provided. “Black Lives Matter” should extend to making sure black women and girls are really making a choice and know what their options are.

It’s evil the lie we are teaching. If Planned Parenthood really wants to reckon with dehumanization, they would consider what being an abortion business means for the hearts, minds, and souls of the people who work there, the people who go in and out of its doors, and the politicians and culture on which they have a stranglehold. We’re a sick society. And a violent one! Every time I see the violence in our streets, I think of the most intimate violence of abortion. If we’re willing to do that, what wouldn’t we be willing to do?

Planned Parenthood doesn’t have “a chance to heal those harms” until it confront the poison that is abortion. Instead, McGill Johnson tells us that: “Achieving health equity requires fighting the systematic racism that creates barriers to sexual and reproductive health care. The pandemic has laid bare racial disparities in health care that we also see in who is most affected by increased abortion restrictions and in skyrocketing sexually transmitted disease rates.”

A few weeks ago, I saw two beautiful black girls go into Planned Parenthood for birth control. I’ll wager they have no idea just how beautiful they are. With Planned Parenthood, they get tips on how to have sex, they are getting “care” from an organization whose values devalue their lives and dehumanize the unborn. And them, too. I hate to sound like Sister Mary Kathryn at the high-school prom telling a couple dancing to make room for the Holy Spirit, but how about telling these young girls they are worth waiting for? What about telling them about the damage they are doing to their fertility — that some day if they actually want to have a baby, they might not be able to because of what Planned Parenthood provided?

Last Friday morning outside Planned Parenthood, underneath the Margaret Sanger Square street sign, a black woman in her sixties stopped me. She wanted to see the brochure I had in my hand from the Sisters of Life. She thanked me — something that is rare on New York City streets. She said that when she was younger she was pro-choice, because she believed everything that she was told about abortion. But then she read Bernard Nathanson’s biography (he was the abortion doctor who helped found the National Association for the Repeal of Abortion Laws, now known as NARAL Pro-Choice America) and realized how bad it is for women, babies, and us all. While she talked to me about the regrets she’s seen women face after abortion, a white man crossing the street hollered obscenities at me, telling me I needed to stand on the other side. Actually, no, my pro-life views don’t keep me from standing under the Margaret Sanger Square street sign to offer help — amazingly, we don’t have a buffer zone in New York yet. The woman told me of the ache in her heart for the pressure young girls and women have to abort their babies. I pray the men in their lives can do more than shout down help when a life is in danger.

Whenever I stand outside a clinic, I want to weep in penance for the ways we — people who know women and girls deserve better, and men, too — have failed them. I have little confidence that Catholic-school-educated children even know that there is another way to live that does not require birth control at a young age and abortion. The president and chief executive of Planned Parenthood has access to the truth about abortion, but some of the girls walking in don’t know what they are getting into.

As McGill Johnson pointed out in the New York Times this weekend, the name of the clinic at Margaret Sanger Square was changed to remove Sanger’s name. But the city keeping the sign seems somewhat appropriate to me — because Planned Parenthood isn’t confronting the fullness of the evil roots and legacy of Planned Parenthood. As long as abortion remains at the heart of Planned Parenthood, the dehumanization continues. I’m reminded of that every time I see the hazardous waste trucks leave Planned Parenthood with boxes (six to twelve of them, it seems, Mondays, Wednesdays, and Fridays).

Martin Luther King: The Legacy of the Civil Rights Movement is...