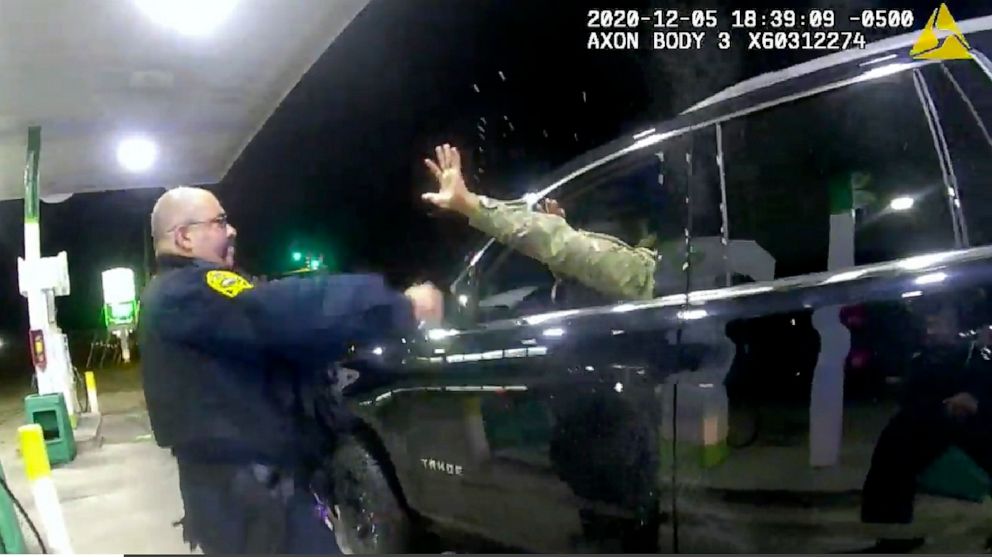 Two Virginia police officers have been sued for allegedly drawing their guns on a uniformed Army officer during a traffic stop and spraying him with a substance.

On Dec. 5, 2020, Windsor police officers Joe Gutierrez and Daniel Crocker pulled over U.S. Army 2nd Lt. Caron Nazario, who is Black and Latino, while he was dressed in uniform, according to the lawsuit filed April 2.

They pulled him over in a newly purchased Chevrolet Tahoe SUV for not having a rear license plate, according to the lawsuit. Nazario was returning home from his duty station at the time, the lawsuit said.

The suit, filed in the U.S. District Court for Eastern Virginia in Norfolk, claims the officers violated Nazario’s constitutional rights and seeks compensatory and punitive damages.

Police body camera footage shows the moment officers pursued Nazario, who then pulled over at a well-lit gas station.

According to the report Officer Crocker submitted after the incident, Crocker said the driver was “eluding police” and he considered it to be a high-risk traffic stop.

Nazario wasn’t eluding police, he was trying to stop in a well-lit area for his safety and for the officers’ safety, according to the lawsuit.

Gutierrez acknowledged that Nazario’s decision to drive to a lighted area occurs “a lot … 80% of the time,” and that the maneuver informed him that Nazario was “at least 80% probability, a minority,” the lawsuit claims.

The vehicle was so new Nazario hadn’t yet gotten permanent plates, but had his cardboard temporary plates taped inside the rear window of the vehicle. When officers reached inside his car, that plate was visible in the rear, the lawsuit stated.

In the video footage, officers shout at Nazario to put his arms out of the window and approach him with their guns drawn.

“I’m honestly afraid to get out of the car,” Nazario is heard saying in the footage.

“Yeah you should be,” one officer replied.

The officers then threaten to arrest him for not listening to their orders to get out of the car and for “obstruction of justice,” the video shows.

“I’m actively serving this country and this is how you’re going to treat me?” Nazario says. Seconds later, an officer appears to spray him in his face with a substance in the video.

Nazario kept his hands up in the air as the officers yelled at him to get out and he shut his eyes, visibly reeling from the spray.

The officers are heard shouting conflicting orders at him, telling him to put his hands out of the window while telling him to open the door and get out.

At one point, Gutierrez told Nazario he was “fixin’ to ride the lightning,” according to the lawsuit. The phrase was a line from the movie “The Green Mile,” a film about a Black man facing execution, and references the electric chair, the lawsuit states.

When he finally got out of the car the video shows the officers repeatedly telling Nazario to get on the ground and then force him down, according to the lawsuit.

The officers struck Nazaro with their fists, knees and hands, forcing him onto his face and placed him in handcuffs, according to the lawsuit.

The lawsuit claims the officers used this force despite not having any probable cause to believe Nazario had committed a crime. Nazario was not charged in the incident.

“These cameras captured footage of behavior consistent with a disgusting nationwide trend of law enforcement officers, who, believing they can operate with complete impunity, engage in unprofessional, discourteous, racially biased, dangerous and sometimes deadly abuses of authority …” the lawsuit said.

Gutierrez wrote in his report that he felt he had to choose between charging Nazario with obstruction or releasing him without any charges.

“I made the decision to release him without any charges,” his report said according to The Virginian-Pilot of Norfolk . “The reason for this decision is simple; the military is the only place where double jeopardy applies. Meaning that whatever happened in civil court, the military could still take action against him. Being a military veteran, I did not want to see his career ruined over one erroneous decision.”

Crocker said in his report he chose against filing charges because Nazario was active duty military and didn’t want to see his career ruined for “poor judgement.”

Crocker and Gutierrez still work for the department, according to The Virginian-Pilot. Windsor is located about 70 miles southeast of Richmond.

The Windsor Police Department did not immediately respond to ABC News’ request for comment.

FBI: 73-Year-Old Pastor and Purple Heart Veteran Arrested For Being at...

Biden hands out half a billion to electric vehicle companies