Home Politics Poll:Doomsday for Sleepy Joe and the democrats looming for next Midterm Election 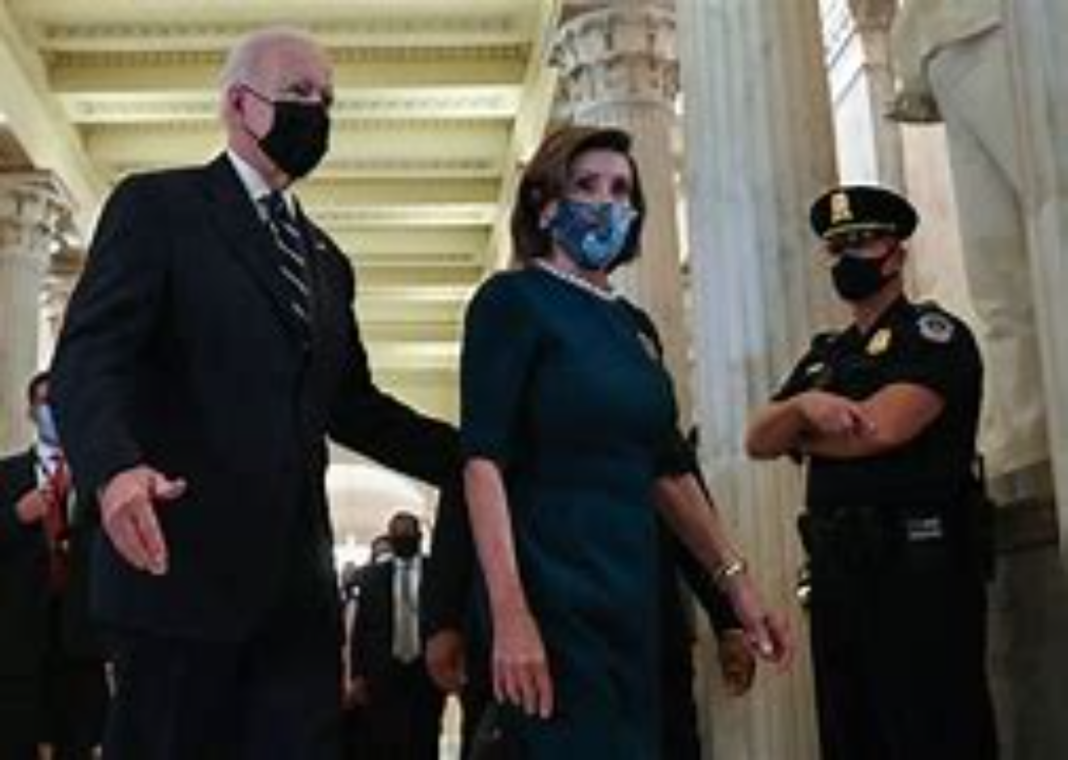 Remember how last weekend, the conventional wisdom was that passing the infrastructure bill was going to help President Biden and the Democrats turn things around? Good times, good times.

This morning’s new poll from the Washington Post-ABC News demolishes that conventional wisdom into tiny pieces.

Majorities of Americans support President Biden’s $1.2 trillion bipartisan infrastructure package and a pending bill that would spend nearly $2 trillion on social programs and climate initiatives. Yet despite the backing for these measures, Biden’s approval rating has ticked down to a new low, driven largely by more negative views among Democrats and independents, according to a Washington Post-ABC News poll.

The Post-ABC poll finds that, if elections were held today, 46 percent of adults overall would back the Republican candidate for Congress and 43 percent would support the Democratic candidate. Among registered voters, the GOP advantage goes to 51 percent vs. 41 percent for Democrats, a historically strong result for Republicans on this measure.

“Historically strong”? I’m trying to remember if I’ve ever heard of the GOP having a ten-point margin on the generic ballot. Not in 1994 or 2010. A handful in 2014 came close.

Just about all of the poll results on economic questions are just brutal for Biden:

The Post-ABC poll also showcases Americans’ current pessimism: Despite a mix of economic signals — falling unemployment and rising prices — 70 percent rate the economy negatively, including 38 percent who say it is in “poor” condition. About half of Americans overall and political independents blame Biden for fast-rising inflation, and more than 6 in 10 Americans say he has not accomplished much after 10 months in office, including 71 percent of independents. . . .

Biden’s approval rating on the economy has also tumbled and now stands at 39 percent positive and 55 percent negative. That 16-point net negative rating compares with a September poll in which 45 percent said they approved of his handling of the economy and an April poll in which 52 percent approved.

His overall approval rating now stands at 41 percent, with 53 percent saying they disapprove. Those who say they strongly disapprove of the way he has handled his job represent 44 percent of adults. Strong disapproval peaks at 80 percent among Republicans, though 45 percent of independents strongly disapprove of Biden’s performance, as do 48 percent of suburbanites and 44 percent of White college graduates. Biden’s overall approval rating is down from 50 percent in June and 44 percent in September, although his current standing is not statistically different from two months ago.

And it appears Terry McAuliffe’s approach on education — “I don’t think parents should be telling schools what they should teach” — is as unpopular nationwide as it was in Virginia.

The poll finds overwhelming support for parents having a say in what their children’s schools teach, including nearly half of adults saying parents should have “a lot” of say on matters of curriculum. The findings break largely along party lines, with those who say “a lot” supporting Republicans by big margins.

Overall, Americans are divided over which party they trust to handle education, with 44 percent choosing Democrats and 41 percent choosing Republicans. That represents a significant weakening in what has historically been an advantage for Democrats on this question.

Finally, remember how handling the pandemic was always Biden’s strength in these public-opinion polls?

Today, Americans are roughly divided on Biden’s handling of the pandemic (47 percent approve, while 49 percent disapprove). Two months ago, 52 percent approved of his handling of the pandemic compared with 41 percent who disapproved. In June and in April, he was in positive territory by a 2-to-1 margin. Biden’s current ratings mirror the country’s deep partisan divisions, with similar majorities of Democrats approving and Republicans disapproving, while independents lean negative, 52 percent to 44 percent.

What if significant numbers of Americans who support COVID-19 vaccination aren’t so supportive of vaccine mandates and people losing their jobs because they don’t want to get vaccinated? What if Americans think past infection and natural immunity should factor into these decisions? What if Biden’s mandate now comes across as an excessive use of government power?

If only someone could have warned Democrats that their agenda was unpopular and that their tone, rhetoric, and attitudes were alienating.