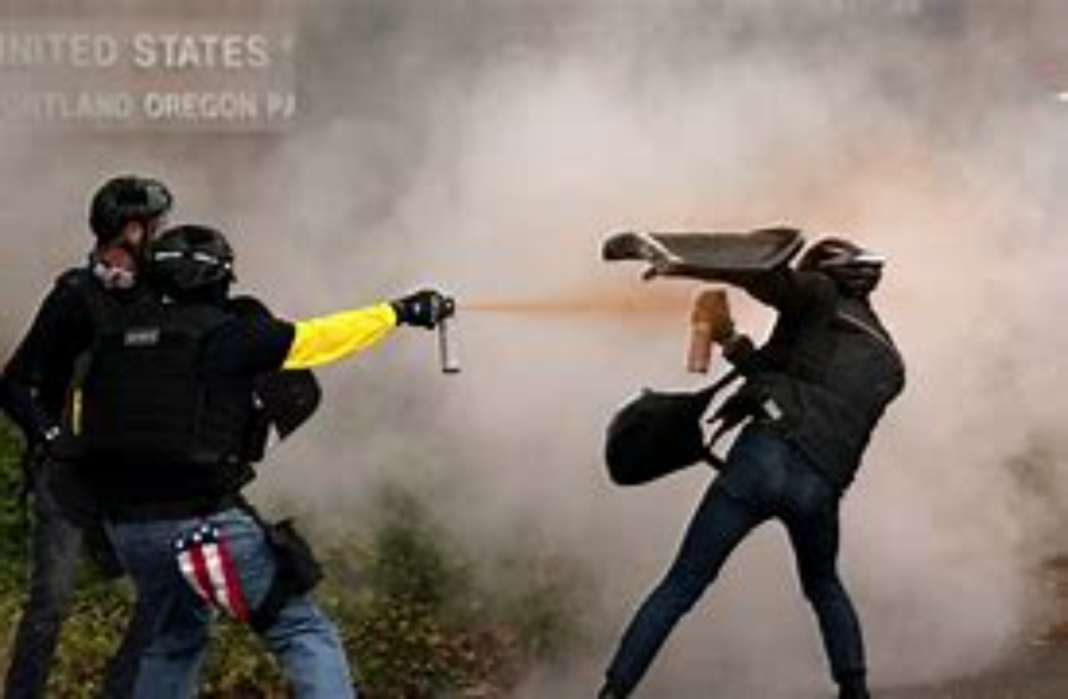 The much-ballyhooed dueling protests in Portland are finally living up the billing, as sounds of gunfire are now ringing out in downtown.

That’s right, apparently, someone is shooting at someone, which is likely to be connected to the Antifa vs. Proud Boys brawl.

Here’s another angle, as you can see the guy behind the recycling can apparently shoots first, then someone else returns fire. It’s unclear which “side” any of these particular individuals are on.

Arrest made of the shooter. Will post more soon. pic.twitter.com/h466xxIj1r

Sean Carmitchel also got video leading up to the shooting, where you can see the guy with the hat backing away holding his gun out to the side as others are walking him back, including what appears to the shooter with his gun drawn and leveled at the guy:

Here’s the first video of the incident taken by me. Talking to other journalists on scene to find out exactly what happened and will release full video shortly. pic.twitter.com/yd9opDFdtx

Couple of other pictures:

.@_jlevinson has photos of the man who appeared to open fire on anti-fascists downtown. It does not appear anyone was injured. pic.twitter.com/bN8OUtu19c

UPDATE: The man arrested has been identified as Dennis Anderson, and rumblings on twitter from antifa sources say he’s associated with the Proud Boys. Anderson is the guy with the hat taking cover behind the recycling bin. Anderson is charged with Unlawful Possession Of A Firearm (Class A Misdemeanor) and Unlawful Use Of A Weapon (Class C Felony), and he’s being held on $7,500 bond. The other shooter is apparently still at large, as no other jail bookings match the time, location, or what would be related charges.

PORTLAND: “I WILL BEAT THE F*CK OUT OF YOU”

Luis Enrique Marquez was on a good one today, he was even threatening members of ANTIFA pic.twitter.com/38UBzPseFr

The press release from the Portland Police Bureau only references a single “suspect” shooting, and makes no mention of the other party firing more shots.

Mason Lake snapped a pic of the aftermath:

So did Sergio Olmos:

The antifa sympathizers mock the police when they arrive on scene, one shouting “I’LL FUCK YOU UP, LITTLE BITCH! FUCK YOUR KIDS, TOO!”:

Portland police get mocked when the finally show up to the scene of a shooting. #portlandriots #Portland pic.twitter.com/52tuuziVlc

In another angle, you can hear someone shout “ALEX!” during the shootout:

I was stuck in a cubby of a doorway of sorts during the shooting and managed to slip my phone out and film a little bit. Nobody has been hit. A car took a little bit of damage though.

Video ID: Several journalists and passersby hide behind in between cars with gunshots pic.twitter.com/tRNv0iSJ6v