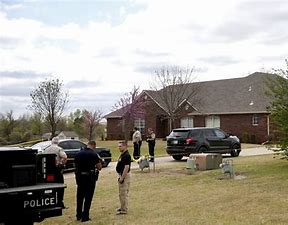 A pregnant Florida woman saved her husband and daughter’s lives by killing a home intruder with an AR-15.

The mom, who is eight months pregnant, retrieved the weapon after the intruders pistol-whipped her husband and violently grabbed their 11-year-old daughter last week.

“They came in heavily hooded and masked,” her husband, Jeremy King, told Bay News 9. “As soon as they had got the back door opened, they had a pistol on me and was grabbing my 11-year-old daughter.”

As the father was getting beaten, his wife went to the bedroom to obtain the firearm. She then fired one shot and hit one of the assailants.

“When he came toward the back door in her line of sight, she clipped him,” King added. “He made it from my back door to roughly 200 feet out in the front ditch before the AR did its thing.”

One of the two intruders was found dead in a nearby ditch, while the other is still on the loose.

King was left with a fractured eye socket, a fractured sinus cavity, a concussion, 20 stitches, and three staples in his head after the attack. He said his family didn’t know the perpetrators, nor do they know why they were targeted.