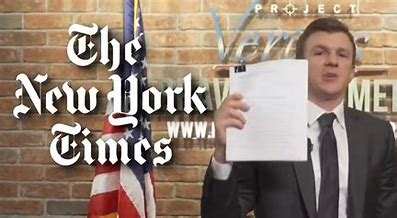 Upset New York Times staff pressed an executive editor about the sting operation where one of the newspaper’s correspondents said media coverage of the Jan. 6 capitol riot was “overblown” and “no big deal,” according to a Politico report.

NYT reporters expressed their concerns with executive editor Dean Baquet over the comments of national security reporter Mathew Rosenberg at a Thursday lunch for the paper’s Washington bureau, Politico Playbook reported Friday. Rosenberg was the target of a Project Veritas undercover operation, where he reportedly made numerous claims about the events of Jan. 6, even describing the day as “fun.”

A video released by Project Veritas, a conservative group that has targeted journalists and Democrats in undercover sting operations, shows Rosenberg on camera criticizing colleagues and the NYT. His comments have reportedly caused tension among staffers, according to more than a half-dozen reporters who spoke to Politico anonymously.

“These fucking little dweebs who keep going on about their trauma … Shut the fuck up,” Rosenberg said regarding his colleagues’ reaction to the riots. “They’re fucking bitches.”

Baquet told staffers that Rosenberg was being careless and stupid, according to Politico. He also said Project Veritas was trying to “make our heads explode” and create division in the newsroom, instructing staff not to play into the group’s hands.

Rosenberg and his fellow reporters have denied claims that the FBI had plants among the rioters at the Jan. 6 capital attack, calling it a “reimagining” of the day’s events.

But, Rosenberg was caught on video claiming “there were a ton of FBI informants amongst the people who attacked the capitol.”

“I know I’m supposed to be traumatized,” Rosenberg said in the video, “but like, all these colleagues who were in the (Capitol) building and are like, ‘Oh my God it was so scary!’ I’m like, ‘fuck off!’”

The NYT is “not the kind of place where I can tell someone to man up,” but Rosenberg said he “kind of want[ed] to be like, ‘dude come on, you were not in any danger,’”

Democrats and the media have largely portrayed the events of Jan. 6 as a “violent insurrection,” which Rosenberg said gave right-wing figures the ability to minimize and downplay the attack.

President Joe Biden called it “the worst attack on our democracy since the Civil War” during an April congressional address.

Mom Shoots Man Trying to Steal SUV With Her Kids Inside