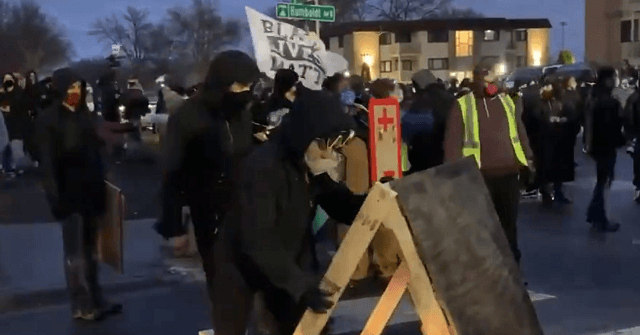 Protesters in Brooklyn Center, Minnesota, began placing embattlements on the streets outside the police headquarters building as the city’s curfew approached. They also carried improved shielding to allow protesters to hide from police projectiles while they throw objects at the police.

Police already shooting riot munitions at these wooden barricades, stay tuned to see how this plays out… pic.twitter.com/jynBrMZ2YL

As the curfew hour approached, police declared the demonstration to be an unlawful assembly.

Unlawful assembly has been declared at the Brooklyn Center Police Department #Dauntewright pic.twitter.com/zzjd7B65cS

Following the unlawful assembly, announcement police began deploying gas in an attempt to move the crowd back from the fencing.

Police have opened the gate and begun tear gassing. pic.twitter.com/I6p69DMGYz

Another group began a F**K the Police dance party away from the front lines.

Hundreds of people gathered late Wednesday afternoon outside the Brooklyn Center police headquarters. National Guardsmen and State police moved in to protect the building during the fourth night of protest following the shooting of 20-year-old Daunte Wright by police on Sunday.

Earlier on Wednesday, the Minnesota Bureau of Criminal Apprehensions arrested former Brooklyn Center Police Officer Kimberly Potter on charges of Manslaughter II. The former officer was processed and released after she posted a $100,000 bond. If convicted on the charge, she could face anywhere from probation to 10 years in state prison.

Bob Price serves as associate editor and senior news contributor for the Breitbart Texas-Border team. He is an original member of the Breitbart Texas team. Price is a regular panelist on Fox 26 Houston’s What’s Your Point? Sunday-morning talk show. Follow him on Twitter @BobPriceBBTX and Facebook.

Michigan’s sore thumb, and why we shouldn’t buy the idea that...