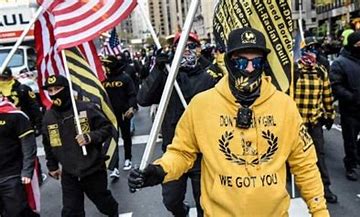 Members of the Proud Boys group are the subjects of a “hate crime” investigation in California for shutting down a drag-queen reading event for children at a local library.

The Alameda County Sheriff’s Office responded Saturday to a report of a disturbance at the San Lorenzo Library where a “Drag Queen Story Hour” was taking place in front of children, parents and other community members.

The Bay Area’s KTVU-TV reported a group of five men described as members of the Proud Boys organization entered the library and disrupted the event as drag queen Panda Dulce was set to read to a group of children.

She told the station the Proud Boys called her “a groomer” and “a pedophile.”

The sheriff’s office said in a statement that the men “began to shout homophobic and transphobic slurs at the event organizer.”

More officers have been deployed to the library. On Tuesday, KTVU said, “a handful of officers were seen keeping an eye on Pride activities, including a button- making and keychain class called ‘Show Your Pride.’”

The area is represented in Congress by Democratic Rep. Eric Swalwell, who was scheduled to visit the library Wednesday.

Five members of the Proud Boys were indicted on the rare charge of seditious conspiracy days before the House Select Committee investigating the Capitol Riots held its prime time hearing. The panel presented its theory that the the Proud Boys were the key perpetrators of an “insurrection” who moved at President Trump’s purported “command” during a presidential debate to “stand back and stand by.”

‘We’re not going to stand down’
Alameda County Sheriff’s Lt. Ray Kelly said the office has received hundreds of emails and calls from people nationwide and the library has received threats.

“There’s been a lot of nasty messages, emails and phone calls, but we’re not going to stand down from providing a safe space for every member of our community,” Kelly told KTVU.

Acknowledging a fine line between free speech and hate, the officer said it will be up to the Alameda County District Attorney’s Office to determine if any crime was committed.

For 25 years, WND has boldly brought you the news that really matters. If you appreciate our Christian journalists and their uniquely truthful reporting and analysis, please help us by becoming a WND Insider!

“One of the beautiful things about working with young children is you get a big sense of hope for the world and you see how inclusive and accepting children can be and then we see how awful and intolerant adults can be,” she told KTVU.

The sheriff’s office said in its statement that it will “dedicate all resources to ensure the safety of members of our LGBTQ community.”

“We will make sure any future events at the library are safe against hate speech and threats of violence,” the ACSO said.

“As we celebrate Pride Month, we will be swift in our response to any incidents where there are threats to harm members of this community.”

See video of the incident:

On June 11th, a group of 5 proud boys stormed a Library in San Lorenzo where Panda Dulce held an event for the kids called “Drag Queen Story Hour.”

While the incident is now being investigated as a hate crime, I have more details that may shock you about those men. pic.twitter.com/FyDTLOcGoX

Border Crisis:60,000 caravans of Haitian migrants headed back to the border