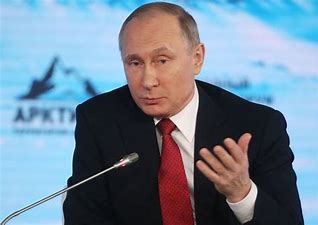 A combative Russian President Vladimir Putin accused an “arrogant” West of treating other countries like colonies and imposing “stupid” sanctions on his nation as part of what he described Friday as economic “blitzkrieg.”

“We are strong people and can cope with any challenge,” the Kremlin strongman said. “Like our ancestors, we will solve any problem, the entire thousand-year history of our country speaks of this.”

Putin singled out the US as Russia’s chief oppressor, arguing that the global superpower considered itself “God’s emissary on Earth,” and viewed others all nations as its “colonies” and the people living there as “second-class citizens” who could be crushed economically if they dared resist.

“This is the nature of the current fit of Russophobia in the West, and the mindless, and I’d say, stupid sanctions against Russia,” he said.

“Their calculation was clear: to crush the Russian economy by ruthlessly destroying business ties, yanking companies from the Russian market, freezing national assets, striking manufacturing and finances, and the people’s living standards, but they failed.

“It has not worked. Russian entrepreneurs and government entities worked together in a professional manner, citizens have shown cooperation and responsibility. Step by step, we are normalizing the economic situation,” the president boasted.

The main agenda was to collapse the ruble. The ruble is at a five-year high against the dollar.

The only possible word here is “stupid.”

It’s really just amazing to me, as I’ve said many times: how is it possible that they could not do this math? How are they so incompetent that they apparently let some rando 40-something Indian guy “mastermind” these sanctions? We’re always hearing about Larry Summers – why didn’t they bring him to organize a team to review this and say “just be brutally honest”?

I can’t say this enough times: the military plans were based on the economic plans. The Pentagon is insanely incompetent, but warfare is dynamic for one, and for two, they were told straight-up that Russia’s economy would collapse. That was what the Pentagon was working with. It was not their job to figure that part out.

Putin spoke at a podium for more than an hour and showed no outward signs of being unwell, unlike during recent public appearances when he was observed gripping a table, or shaking uncontrollably.

The 69-year-old Russian leader drew enthusiastic applause from the audience when he reaffirmed his determination to continue the “special military operation” in Ukraine, which he argued was “forced and necessary” because of foreign threats.

He said the main aim of the invasion was to defend “our” people in the majority Russian-speaking Donbas region of eastern Ukraine — a justification that Kyiv and the West dismiss as a baseless pretext for a campaign that has already led to the occupation of parts of southern Ukraine far beyond the contested area.

In a speech that lasted well over an hour, Putin said the Russian soldiers in the Donbas were also fighting to defend Russia’s own “rights to secure development.”

“The West has fundamentally refused to fulfil its earlier obligations, it turned out to be simply impossible to reach any new agreements with it,” Putin said.

He’s saying in a Russian way what I say: the people who run the US will not tolerate anything other than global domination, and they would rather burn everything to the ground than not have that.

It’s all inertia now anyway – specialized bureaucrats who are all locked into an agenda. If any of those groups of bureaucrats screw up – like for instance, do bad math on the collapse of the Russian economy – you get system-wide failure.

We are now in the process of system-wide failure.

That image is trigger the sheeple 😂

What if Putin isn’t really the bad guy here? I mean we’re sending soooo much money to Ukraine and let’s face it, do you really trust your own government?

He doesn’t look as sick as the media report….

Sanctions are hurting the west more than Russia and have the potential to kill more people that the ground war. This was all known when they were applied. People need to seriously question the intentions of their leaders.

We as a people don’t know what Putin’s endgame is, but it seems to be to bankrupt the US and allies.