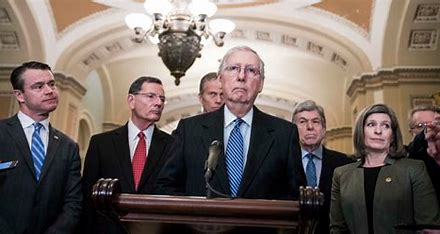 Well, it’s happening folks. Signs of the RED WAVE are everywhere, and that fake “Dem surge” nonsense, and all those silly phony polls, are now falling by the wayside, as we get closer and closer to D-day. It’s only a couple of weeks away, and now, the Real Clear Politics official map is predicting that Republicans will take the Senate. I agree and have always thought we’d take the Senate. But I actually believe this map is off by one. I’ll explain that later…

Here’s what RCP is basing their map on:

I disagree with this. I do not believe communist Warnock will beat Walker. I believe Walker will win that election, so another pick-up for Red, in my humble opinion.

This new map comes after a massive GOP spend, at the absolute right time. They went all-in a couple of weeks ago. NPR reports on the big ad buy:

The field has moved slightly back in Republicans’ direction, in part because of a natural tightening closer to November as the races come into focus for more people, but also because of a deluge of television advertising in key races supporting GOP candidates.

The Senate Leadership Fund, a super PAC aligned with Republican Senate leader Mitch McConnell, has spent $52 million on TV ads in just the past two weeks, according to the ad-tracking firm AdImpact.

A new outside group, MAGA Inc., aligned with and sanctioned by former President Trump has now popped up and starting to spend significantly. They have poured in about $2 million in two states — Pennsylvania and Ohio, places where Trump-endorsed Senate candidates are struggling.

Partisan control of the Senate is currently tied at 50-50, with Democrats in charge of the agenda because they have the White House. So Republicans need a net gain of one seat to wrest control of the chamber.

The field of the top 10 most likely to flip continues to be the same group of races with Republicans making serious runs at five Democratic-controlled seats and Democrats contending in the other five. But control will likely be decided in just five of those — with Democratic targets in Pennsylvania and Wisconsin and Republicans making a real push in Nevada, Georgia and Arizona.

Republicans enter the final weeks of the contest for control of Congress with a narrow but distinct advantage as the economy and inflation have surged as the dominant concerns, giving the party momentum to take back power from Democrats in next month’s midterm elections, a New York Times/Siena College poll has found.

The poll shows that 49 percent of likely voters said they planned to vote for a Republican to represent them in Congress on Nov. 8, compared with 45 percent who planned to vote for a Democrat. The result represents an improvement for Republicans since September, when Democrats held a one-point edge among likely voters in the last Times/Siena poll. (The October poll’s unrounded margin is closer to three points, not the four points that the rounded figures imply.)

With inflation unrelenting and the stock market steadily on the decline, the share of likely voters who said economic concerns were the most important issues facing America has leaped since July, to 44 percent from 36 percent — far higher than any other issue. And voters most concerned with the economy favored Republicans overwhelmingly, by more than a two-to-one margin.

This is all very exciting, but it won’t mean anything if every one of us comes out to vote.

We can’t sit this one out. If you do, you’re helping the Dems, whether you like to believe it or not. But that’s the truth. So, now is the time to suit up, pick your side and go to war.

Let’s do this, and then, when we retake the Senate, let’s give Mitch the boot.

Biden’s New Asylum Process: What You Need to Know