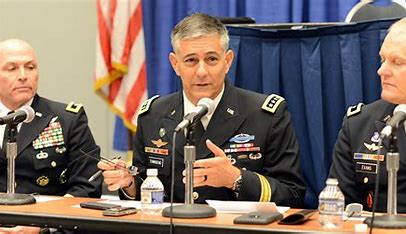 Facing what a top general called “unprecedented challenges” in recruiting, the U.S. Army expects to have 28,000 fewer soldiers over the next two years than previously projected.

Vice Chief of Staff Gen. Joseph Martin, the Army’s No. 2 officer, told a House Armed Services Committee panel Tuesday the military branch likely be understrength by at least 7,000 soldiers on Sept. 30, the end of the current fiscal year, the Military Times reported.

In response, Rep. Jackie Speier, D-Calif., said she wants the committee to hold a hearing on the “alarming” development and work on solutions.

The paper said the Army is running out of short-term ideas to fix the problem. Some of the quick fixes have included “flooding money and resources to USAREC, increasing retention eligibility and goals, activating new officers ahead of schedule and increased staffing to reduce a medical waiver backlog.”

Some proposals have been ditched due to concerns about lowering standards.

Briefly, last month, the Army dropped its requirement for a high school diploma. The Military Times reported at the time that the Army had hit only 40% of its recruiting goals for the year, “with the struggle to fill the ranks seemingly so grim the Defense Department reduced its planned total force size because prior recruiting goals were out of reach.”

Across the military branches, annual target recruitment goals were down 23%, Pentagon officials said in June.

Earlier this month, Breitbart News reported an Army training instructs soldiers to shower with transgender members of the opposite sex, even if they have not undergone a surgical transition.

Happy Pride Month! We are the best #USAF by leveraging the diverse backgrounds & strengths of each member of our total force. We are committed to making the #AirForce a place where all can reach their full potential. #PRIDE #Pridemonth pic.twitter.com/Wny1TkPVm6

The Blaze’s Daniel Horowitz suggested that “before we lower standards to appalling levels, how about we stop kicking out some of the most seasoned, battle-hardened soldiers for not getting the (COVID-19) shots?”

“Up to 40,000 National Guardsmen risk expulsion from the force if they fail to comply with the mandate by tomorrow,” he noted. “That is 13% of the National Guard – and as much as 30% in some states. So, our government would rather recruit those without high school diplomas than relent on a mandate for a shot.

He also pointed out that some of the most patriotic military families tend to be among those who did not get the shots.

“Those 16- to 18-year-olds who didn’t get the shots in the past year made the right choice, even based on the original risk-benefit analysis,” Horowitz wrote.

“Yet all those young boys who didn’t want to risk myocarditis cannot follow in the footsteps of their fathers or grandparents. Instead of embracing these kids from a pedigree of hundreds of years of U.S. military service, the Pentagon is looking to further reach out to illegal aliens to serve in the military.”