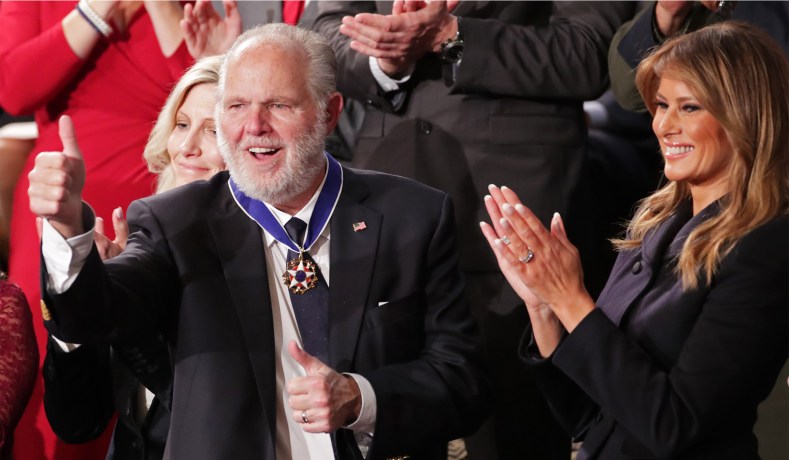 In 1993, National Review’s cover story by James Bowman called Rush Limbaugh “The Leader of the Opposition.”

Like today, conservatives were then frozen out of power. Newt Gingrich wasn’t the House GOP leader yet, and Bob Dole was never a real Man of the Right.

It was a sign of future political currents that we now see more clearly with the rise of Trumpism that the role of chief opponent of Bill and Hillary Clinton’s left-wing policies back then would be a college dropout from Cape Girardeau, Mo. But the abolition of the Fairness Doctrine and the falling prices of satellite broadcasting ushered in by Ronald Reagan’s free-market policies made Rush Limbaugh possible.

Rush was a unique talent. He started his national radio show in July of 1988, just as Ronald Reagan was preparing to leave the national stage. By the time National Review put him on its cover, he was on 616 radio stations with a three-hour daily show that reached 20 million people a week. The success of his best-selling book The Way Things Ought To Be, which I was privileged to be the collaborator on, practically ushered in an era of mass marketing of conservatives in book publishing.

But Rush did a lot more for publishing than just write best-selling adult and children’s books. “He endorsed on air the best thinkers and writers of the movement and his taste was unerring,” recalls Alex Hoyt, a leading book agent who specializes in conservative authors.

What made Rush different in radio was that he promoted conservative ideas and skewered liberals misgovernance with wit, wisdom, humor, tenacity, and an irrepressible style. One of his biggest frustrations? “I’ve made mistakes and try to own up to them, but I just wish one out of a hundred of my critics had ever actually listened to an entire show of mine.”

Rush was no intellectual, but he loved absorbing the ideas of conservatism and translating them to an audience that was often too busy making a living to read long books or attend seminars. William F. Buckley was a special influence on Rush. “He single-handedly is responsible for my learning to form and frame my beliefs and express them verbally in a concise and understandable way,” Limbaugh once said.

I last saw Rush in Palm Beach, Fla., in November 2019, when National Review presented him with a well-deserved award. He had no knowledge at that time of the lung cancer diagnosis the next January that would eventually claim his life today at age 70.

He was uncharacteristically ebullient when we met offstage that night. The truth is that the bombastic narcissism of Rush’s radio persona was mostly a marketing act. Rush was, in truth, a shy man, and he became more so after he suffered near-total deafness in 2003. He was eventually able to harness the latest technology and use a cochlear implant to seamlessly continue his radio show.

Rush was a stalwart supporter of President Trump, but he also had his private doubts about Trump’s style and approach. “I’ve spent my entire career practicing plain speaking and often being outrageous,” he told me. “But Trump has no ‘off’ switch, and while I love his policies there’s no nuance, not enough understanding you have to grow the audience not just hold on to it.” “I hope we learn from Trump, and we also harvest an entire generation of younger leaders who can take our message into the future.”

In the media, there is indeed an entire generation of younger conservatives who are “Rush Babies,” who grew up listening to Rush and learning the art of communication from him. Tucker Carlson, Ben Shapiro, Dana Loesch, and Laura Ingraham come to mind.

For my part, I mourn the loss of a friend, a collaborator, and a master. Because I too learned a great deal from Rush and will always cherish the opportunity I had to exchange ideas with him for nearly three decades.