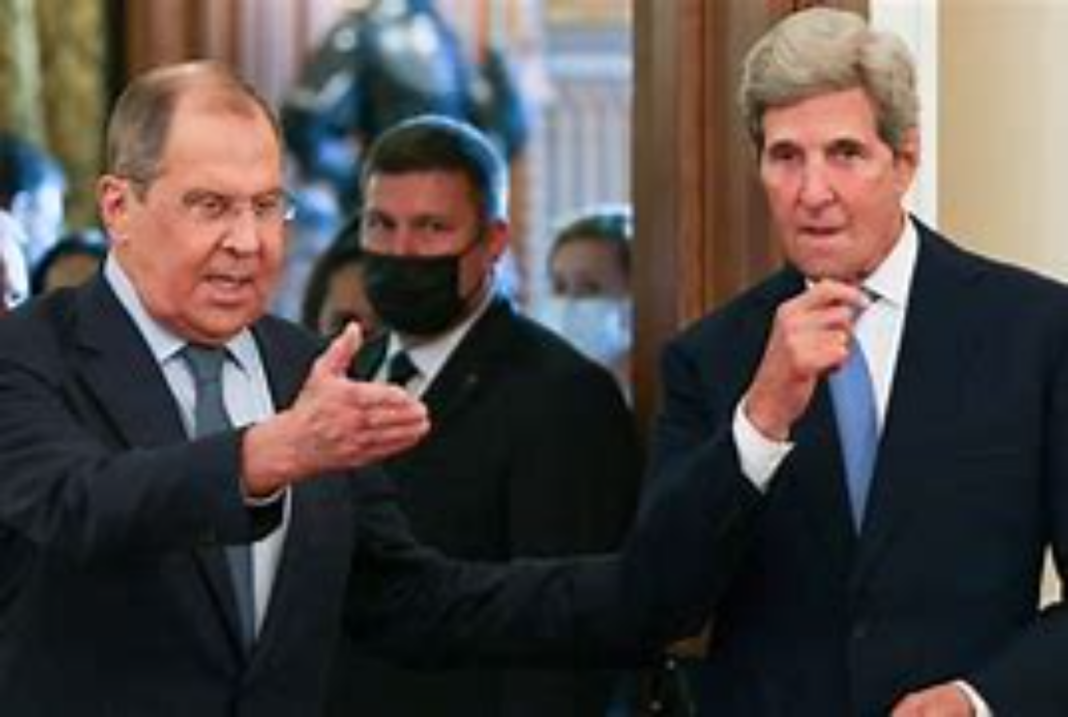 Kerry told NPR that his three days of talks with Kremlin officials were “exclusively” dedicated to climate change. But coming less than a month after Biden’s first summit with Russian President Vladimir Putin, and amid a series of ransomware attacks blamed on Russian cybercrooks, Kerry’s trip was clearly aimed at improving the bilateral climate as well.

“Obviously, I think it’s helpful to have the countries talking together and trying to find something where you can have common ground and make things happen,” Kerry said in an interview in Spaso House, the U.S. ambassador’s residence in Moscow.

Kerry said that he spent about an hour on the phone Wednesday with Putin, who was traveling outside of Moscow. Putin was “very forthcoming and thoughtful” about ways to reduce greenhouse gas emissions, Kerry said, and he hoped that “we can continue to feel the kind of cooperative possibility that emerged in the course of our conversation.”

Kerry’s main job is to convince other countries to meet the goals of the 2015 Paris Agreement on climate change, which the Biden administration rejoined in February, reversing former President Donald Trump’s decision to withdraw from the pact.

Asked if he and Putin had spoken about anything other than climate, Kerry chose his words carefully.

“We talked about the climate reductions and a very brief but nevertheless substantive notation for both of us regarding the cyber situation at this point in time,” he said, declining to elaborate further.

During Kerry’s visit to Moscow, there were reports that REvil, the gang behind a number of recent attacks on U.S. companies, had suddenly gone offline, though it was unclear whether by its own choice or because a government agency had targeted it. Dmitry Peskov, the Kremlin spokesman, told reporters he did not know whether REvil’s disappearance had anything to do with U.S. demands the group be shut down.

Days before Kerry’s visit, Biden phoned Putin to discuss the ransomware attacks that followed their summit in Geneva, reiterating his vow to take “any necessary action” to defend Americans and U.S. critical infrastructure from cybercriminals.

Kerry gets interviewed by NPR’s Lucian Kim on Wednesday at Spaso House, the official Moscow residence of the U.S. ambassador to Russia.

It’s no coincidence that Biden dispatched Kerry to Moscow to begin the process of raising U.S.-Russian relations from their lowest point since the Cold War. As former President Barack Obama’s secretary of state, Kerry traveled to Moscow so often that his Russian hosts started joking about his frequent visits.

On his latest trip, Kerry got a warm welcome. After Russian Foreign Minister Sergey Lavrov received him on Monday for a lunch of smoked duck, filet mignon and wine from southern Russia, one Moscow newspaper wrote that Kerry had been given “an especially hot reception.”

Lavrov, who spoke to Kerry dozens of times during his tenure as U.S. secretary of state, addressed him as “dear John.”

“Your visit is an important and positive signal from the point of view of promoting bilateral relations, removing tensions and establishing professional, substantive activities in areas where we can find common ground,” Lavrov said. “This approach is fully consistent with the spirit of the Geneva summit between our presidents.”

Both sides are looking for areas of cooperation

Climate change is “the low-hanging fruit of possible success” in U.S.-Russian relations, said Nina Khrushcheva, an international affairs professor at The New School in New York.

“The more bilateral connections, the better,” she said. “If both sides set aside ideology, this visit could lead to something positive.”

Biden has used the nonconfrontational issue of battling climate change to smooth over relations with the Kremlin in the past. Putin took great offense when Biden agreed with an interviewer in March that the Russian leader was a “killer.” After Biden called him in April, Putin accepted the olive branch, first attending the White House’s virtual climate summit, then agreeing to meet in Geneva.

In addition to nuclear arms and cybersecurity, climate change is an area where the Kremlin can engage with the United States as an equal despite its diminished economic and geopolitical clout. For the Kremlin, the resumption of bilateral consultations on issues of global importance add to Russia’s prestige and signify a return to the status quo before 2014, when the United States largely froze relations because of Putin’s military intervention in Ukraine and annexation of Crimea.

The Russian president has evolved on climate

Putin, who rules a carbon superpower with vast deposits of oil, gas and coal, used to be a climate skeptic. He once quipped that “an increase of two or three degrees wouldn’t be so bad for a northern country like Russia. We could spend less on fur coats, and the grain harvest would go up.” Putin has also blamed volcanic eruptions for causing more greenhouse gas emissions than humans do and has mocked renewable energies.

Russia signed both the Kyoto Protocol and Paris Agreement, the two landmark treaties designed to cut greenhouse gases, in part because the country’s commitments were based on emissions in 1990 — right before the collapse of the Soviet Union brought down much of its heavy industry.

Even as his regime depends on the revenues from Russia’s hydrocarbons, Putin has begun to address the necessity to reduce greenhouse gas emissions. This month, he signed a law requiring Russian businesses to report carbon emissions starting in 2023.

“The urgency is as high as it could be, and that’s the urgency that I brought here to Moscow in the last few days,” Kerry said. “There’s a readiness and a willingness to undertake new initiatives.”