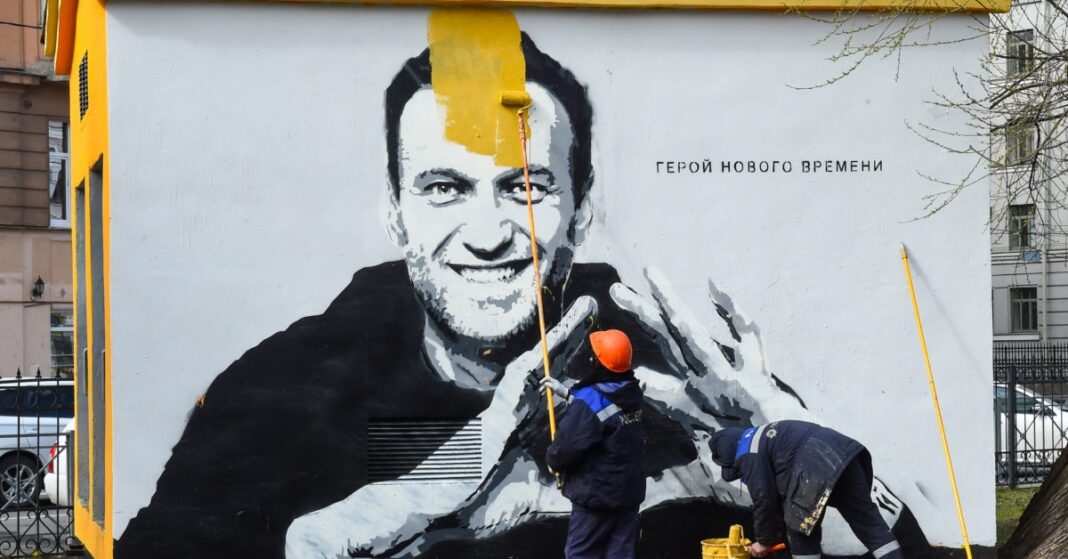 So she was surprised when her handwritten letters to jailed colleagues kept being rejected.

In them, she had relayed the news that Leonid Volkov, Alexei Navalny’s right-hand man, had announced the closure of almost 40 campaign offices throughout the country — including the one they had dedicated their lives to in the city of Yekaterinburg.

State prosecutors were pushing to label Navalny’s groups as extremist, putting them on a par with terrorists such as al-Qaeda. Continuing to stage coordinated protests or campaigns had become too risky.

The campaign offices had played a crucial role in spreading Navalny’s message to Russia’s regions. It was largely thanks to them and the internet that he had become a figure of national significance. The news that they were now being dismantled had received broad media coverage and could hardly be classified as sensitive information.

“I was told the letters were being blocked because they contained the words ‘Navalny’ and ‘Volkov,’” Reich told POLITICO. “How can you forbid certain names? In Russia, Volkov is a common surname!”

It is just one of many examples of how far the attempt to attack and discredit Navalny and his associates has gone in recent weeks. “It’s as if the entire country is in a state of war,” Reich said. “Some people treat you like you’re family, others like a criminal who must be locked up.”

So far, she has managed to dodge arrest by going into hiding. But all of her (by now former) colleagues have been jailed in connection with a protest on April 21. The protest, which took place in dozens of Russian cities, was a last-ditch effort to secure independent medical care for Navalny, whose health has reportedly nosedived since he was arrested in late January.

But as the former head of Navalny’s Yekaterinburg branch Alexey Gresko told a small crowd of protesters minutes before he was escorted away by police: Their fight is a bigger one.

“The flywheel of repression has been unleashed. Today it is directed against Alexei, tomorrow it will be еvery one of us,” he said. Earlier that day, law enforcement had raided his home and campaign headquarters, confiscating computers and other hardware.

Russia’s hardened opposition tends to shrug off such harassment and short stints behind bars — Gresko is currently serving a 29-day sentence for breaking protest laws — as just another day at the office. But even the coolheaded admit Russia is undergoing a fundamental shift.

By the time Gresko is released, the protest he helped organize mere weeks ago will already belong to a different era.

If a Moscow court rules against Navalny’s groups — and, with a temporary freeze imposed on their activities, the signs are certainly pointing that way — organizers of “extremist” protests or campaigns could face a 10-year prison sentence. Even a loose association with Navalny’s network, such as support in the form of donations or on social media, could result in prosecution.

The trajectory of Vladimir Putin’s leadership has long been clear. His latest term especially has been defined by the squeezing of civil society with the help of ever more restrictive laws, rubberstamped by a puppet parliament. But in recent weeks the drumbeat of repression has taken on an accelerated pace that has shocked even veteran Kremlinologists.

“We wake up to a new country every day!” analyst Konstantin Gaaze recently exclaimed on TV station Dozhd, one of a handful of remaining independent media.

Most commentators will point to parliamentary elections in the fall, and at Navalny’s return to Russia in late January after undergoing treatment for Novichok poisoning in Germany, as the reasons for the latest crackdown.

According to Navalny, his very survival was an affront to Putin. And even if that wasn’t the case, Navalny’s subsequent behavior undoubtedly was.

From the moment he woke up from a coma, Navalny publicly pointed the finger at Putin for ordering his assassination attempt — the Kremlin has denied any connection to the poisoning. Navalny then gave a name and face to the alleged henchmen in humiliating YouTube videos. After that  — and perhaps worst of all — he had the gall to return to Russian soil.

Many, including some in Navalny’s camp, thought the Kremlin might let him walk.

That didn’t happen. The opposition leader was arrested as soon as he set foot in Russia. A recycled embezzlement case (which Navalny’s allies and the European Court of Human Rights consider politically motivated) served to lock him away for years.

Instead of the grand finale, Navalny’s jailing proved merely the signal for more whip-cracking, first on the streets — protests in support of Navalny led to more than 13,000 arrests — then beyond.

Aided by a sophisticated CCTV network, police have taken to paying house visits. The sigh of relief that followed returning home from a protest unscathed is now a thing of the past.

Several journalists and even a student paper are under investigation for highlighting the Navalny protests. And in the past month, the popular Meduza news website was branded a “foreign agent,” spurring an exodus of advertisers. (The outlet has managed to stave off bankruptcy thanks to a crowdfunding campaign.)

Lawyers, too, are on the defendant’s bench. Ivan Pavlov, a prominent treason lawyer who also represents Navalny’s groups in the extremism case, was recently arrested.

“First they persecuted activists, then journalists, now lawyers. Don’t ask for whom the bell tolls — the Kremlin’s bell tolls for every Russian citizen on the most exotic pretenses. To use an old expression: Show me the man and I’ll show you the crime,” wrote political analyst Andrei Kolesnikov in VTimes, citing a well-known phrase by Stalin’s infamously ruthless secret police chief.

Such parallels to Stalin’s Great Terror and, less dramatically, to the repressive stagnation of the late Leonid Brezhnev period, are now common.

And while today’s Russia is a far cry from being a gulag state, the comparisons reflect a general atmosphere of utter lawlessness.

Just as Putin restored the Soviet national anthem with changed lyrics upon coming to power, there is a distinct punitive Soviet tune to the latest crackdown, as much as the details might differ.

At the very least, the new method of dealing with dissent is a departure from the crafty way in which the Kremlin defused the last significant protest wave in 2011-2012, by accommodating, or seeming to accommodate, some of the demands.

“Just like then, the Kremlin is now trying to outpace the opposition. But this time those in charge are not managers but men in military uniforms,” Gaaze said, expressing a popular view that Russia’s military-security establishment is increasingly calling the shots.

“[Before it used to be]: you’ve come out to protest, but we’ve already solved the issue. Now it’s: You’re going out to protest but we’re already waiting for you at the door. Or, we’ll get you after.”

Indeed, vaguely formulated laws combined with the turbocharged accusations made against Navalny and his associates have many Russians wondering whether they are next.

Russian law excludes the retroactive prosecution of those who have supported Navalny’s movement in the past. But in today’s Russia, there’s just no being sure.

“Those who want to exclude any risks will have to delete everything in their social media accounts that is connected to Navalny or the FBK,” prominent rights lawyer Pavel Chikov recently warned, referring to Navalny’s Anti-Corruption Foundation (FBK).

Russian parliamentarians have also proposed legislation that would ban anyone “involved” with extremism from running in State Duma elections. The way it was written, the law would have retroactive force, barring Navalny associates and also thousands of ordinary Russians from political participation.

It all appears to serve the single purpose of rolling out the red carpet for the ruling United Russia party to win a parliamentary majority in the fall election. But even after that, Russians shouldn’t expect a thaw, many analysts warn.

“The disloyal [to the Kremlin] have been made the equivalent of terrorists … That also means you can’t make any concessions, because that means their demands will only increase,” political scientist Vladimir Pastukhov told Dozhd.

For the first time since the fall of the Soviet Union, Russia’s organized opposition is being outlawed. Yet many in Navalny’s camp dispute the idea that they are finished. They argue that Navalny was only a lightning rod for Russians’ displeasure over floundering living standards, a general unhappiness with the status quo and local concerns, for example, over the environment.

In Yekaterinburg, Reich has noticed a marked change since 2017, when most of Navalny’s campaign offices first set up shop. “People come to us now and ask: When is the next protest? It’s a horizontal movement.”

She doesn’t exclude the possibility that former campaign workers might set up a new group and go it alone. “They can ban you from participating in formal politics but they can’t ban you from thinking and acting according to your principles,” she said.

And therein lies the irony: in aiming for total control, the Kremlin might be blindfolding itself. In the aftermath of an unpopular move to raise the retirement age in 2018, the number of Russians who believe their country is heading in the wrong direction sharply increased, and it has continued to hover at around 40 percent since then, figures from the independent Levada Center pollster show. And after reaching an all-time high following the annexation of Crimea, Putin’s approval rating has also slid back to where it was in 2011-12, when tens of thousands participated in anti-Kremlin protests.

As analyst Abbas Gallyamov said in comments to the Radio Svoboda website: “The authorities have taken away their own barometer. Something is stirring in the depths. At some point it will inevitably burst to the surface, catching them by surprise.”

Or, as Reich optimistically points out: “Yes it’s a new era. But even those must end sometime.”