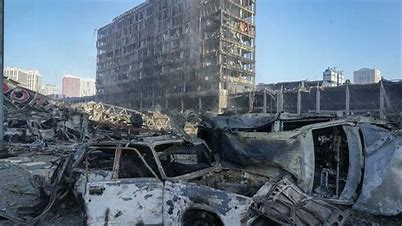 You may have “reached out” to people in a war zone. Tried to contact them. When you hear back — there is hardly a better feeling, true?

• A cellist from Kharkiv, Denys Karachevtsev, plays amid the ruins: here.

• Inna Sovsun, a member of the Ukrainian parliament, noted something. A woman from Mariupol arrived in Hungary with four children. One was her own. Another was her sister’s child. (The sister had gone to find water and disappeared.) Another was the child of her neighbors, who had been killed. The fourth? As the woman was running for an evacuation bus, she saw a boy, sitting on the street next to his dead parents. “She took him too,” as Sovsun said.

• Russian forces “are kidnapping the mayors of our cities,” Zelensky told The Economist. “Some of them we have already found, and they are dead.”

• A Ukrainian police general, Vyacheslav Abroskin, is a man. According to the journalist Olga Tokariuk (writing here), Abroskin “offered to surrender himself to Russians if they allow him to enter Mariupol and evacuate children who are stuck there under the bombs.” He said, “I will surrender to captivity at the last checkpoint at the city exit if kids are allowed to pass.”

For a month now, Russian forces have repeatedly attacked Ukrainian medical facilities, striking at hospitals, ambulances, medics, patients and even newborns — with at least 34 assaults independently documented by The Associated Press.

AP journalists in Ukraine have seen the deadly results of Russian strikes on civilian targets first hand: the final moments of children whose tiny bodies were shredded by shrapnel or had limbs blown off; dozens of corpses, including those of children, heaped into mass graves.

(For the rest of the article, go here.)

Putin supporters and apologists, we will always have with us. Every day, every hour, they grow more abhorrent.

• Here is the journalist Shaun Walker, of the Guardian:

The few people who didn’t leave Irpin were mostly those too old and too frail to walk. For them, the last month has been hell. Death, illness and frayed nerves, a few miles from Kyiv. I found it difficult to listen to these stories & keep it together.

I have quoted a tweet from him. And here is his article: “Escape from Irpin.”

• Hanna Liubakova — the journalist with whom I podcasted last week, here — circulated a video of a woman lying in a hospital bed, talking. Liubakova commented, “This is absolutely painful to watch and listen to. Two shells hit the house where this woman was. With the first shell, her fingers were blown off. With the second one, her leg was blown off.”

Who is responsible for this? Biden? The CIA? NATO? Davos? Fauci? No. That would be the man at the top of Russia’s dictatorship. He is slaughtering people in a war of conquest.

• From Reporters Without Borders: “Chilling account of Radio France fixer who was kidnapped and tortured by Russian soldiers in Ukraine.” (For the article, go here.)

One more, from the same source: “Russians use abduction, hostage-taking to threaten Ukrainian journalists in occupied zones.” (Article here.)

The streets of Mariupol [are] just one giant cemetery among ruins now. Just over a month ago, this was one of Ukraine’s fastest-developing cities. I was very impressed by the progress achieved in the last 6 years. Now Russia has come.

• A report from New Lines magazine is headed “Russia Backs Europe’s Far Right.” Oh, yes. This has been going on for many years. The report is subheaded “Emails and documents show just how closely Italian, French, German and Austrian politicians coordinate with Moscow.”

I always thought that the posture of the nationalist-populist Right toward Putin was summed up by photos of Karin Kneissl, who at the time was Austria’s foreign minister. In the summer of 2018, she danced with Putin at her wedding. At the end of the dance, she curtsied to him, in her dirndl, looking up at him adoringly.

Later, she landed a board position at Rosneft, the Russian oil giant, and started blogging for Russia Today.

• In videotaped remarks, the Ukrainian president, Zelensky, spoke directly to Viktor Orbán, who is one of the Putin-friendliest leaders in Europe. “Listen, Viktor,” said Zelensky, “do you know what is happening in Mariupol? I want to be open once and for all — you should decide for yourself, who you are for.”

• Yaroslav Trofimov, the chief foreign-affairs correspondent of the Wall Street Journal, tweeted, “Flight path twice as long as it should be because Hungary refuses to allow weapons for Ukraine to cross its airspace, let alone offer any help to Ukraine of its own.”

• The vice foreign minister of China, Le Yucheng, said, “NATO should have been consigned to history alongside the Warsaw Pact.” NATO and Communist rule in China were born the same year: 1949. Some of us are hoping that NATO outlives the Communist rule.

• Biden gave a speech in Poland, whose closing comments included, “For God’s sake, this man cannot remain in power!” (Biden was referring to Putin.) This comment is widely judged to have been a great error. Indeed, the White House “walked it back,” or tried to. Then Biden himself walked back the walk-back.

In my view, the controversial comment was, among other things, a gift to Biden’s Putin-friendly opponents and his other opponents — because it allows them to ignore the speech as a whole, which was a ringing call to freedom over tyranny, light over darkness. An American speech.

• Biden called Putin a “butcher” — which is as obvious as saying that Putin’s first name is “Vladimir.” In France, President Macron objected, calling the characterization imprudent, basically.

Okay — but the butcher’s still a butcher.

• Sometimes we like it when a leader “tells it like it is.” Sometimes we don’t. A lot of tribalism is involved, frankly. “All is vanity,” we read in Ecclesiastes. In recent years, I have been tempted to say, “All is tribal.” Some celebrators of “telling it like it is” are now fierce and scolding advocates of rhetorical discretion.

• Putin tried to taunt the West by invoking the cancel culture, and sticking up for J. K. Rowling, in particular. JKR rejoined, “Critiques of Western cancel culture are possibly not best made by those currently slaughtering civilians for the crime of resistance, or who jail and poison their critics.”

• Alexei Navalny, of course, is Putin’s most prominent jailed and poisoned critic. He is the Russian opposition leader. The state has just added nine years to his sentence. I’m told how popular Putin is in Russia. And what a big strong macho man he is. But he seems awfully scared of Navalny, doesn’t he?

• Stephen Peter Rosen, the national-security professor at Harvard, wrote an article headed “If Putin Were to Use Nuclear Weapons, What Would Follow?” I thought of a once-famous Time magazine cover, from 1982: “Thinking the Unthinkable.”

• If you listen to the warmongers, neocons, and Russophobes, America is a free country while Russia is an unfree one. But this is nonsense: In America, you can publish Putinist propaganda. And in Russia, you are free to do just the same.

Top 25 Coolest Things to do in Newfoundland and Labrador |...