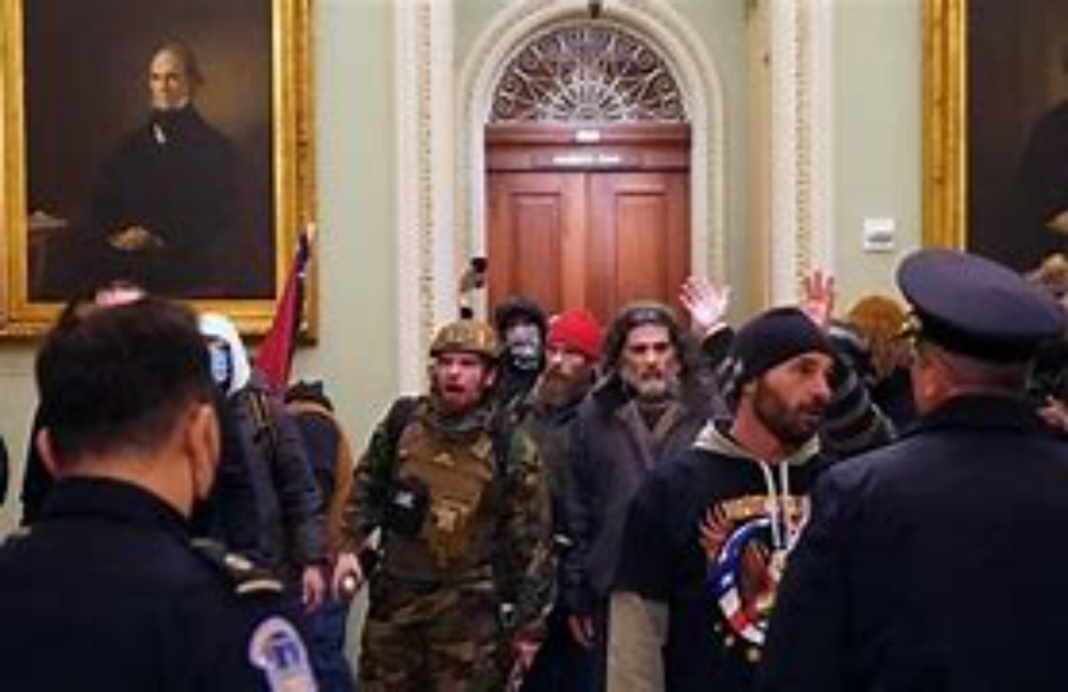 Married officers Caitlin and Alexander Everett were fired because “they crossed the outdoor barriers established by the Capitol Police and were directly next to the Capitol Building,” Diaz said in a statement.

“It is beyond absurd to suggest that they did not know they were in an area where they should not be, amidst what was already a violent, criminal riot,” he said.

Diaz also called the officers’ presence at the Capitol that day as “an attack on our profession and on every officer across the country.”

Mike Solan, president of the Seattle Police union that represents officers, did not immediately return a telephone message seeking comment about the decision to fire them.

The officers, in a report released by Seattle’s Office of Police Accountability, said they stayed on grass 30 to 50 yards (27 to 45 meters) away from the capitol building and never saw any signs of a disturbance.

It’s not known if the officers are under criminal investigation by federal authorities for their actions.

The Everetts were among six Seattle officers in the nation’s capital for President Donald Trump’s “Stop the Steal” rally.

The couple’s trip became public after Caitlin Everett posted a photo on Facebook of her and Alexander Everett at the demonstration. Four other officers later admitted they were also there but said they were not involved in the riot.

Friday marked the first time that the Everetts have been named. The police department has not named the other four officers.

The Washington Supreme Court announced Thursday that it would hear a lawsuit filed by the officers against people who filed public records requests seeking to disclose their identities.

Last month’s investigation by Seattle’s Office of Police Accountability found that the Everetts violated the law by trespassing at the U.S. Capitol while rioters stormed the building. The police discipline report stated that they also lied about their activities.

Despite the Everetts’ claim that they didn’t see a disturbance, FBI photographs showed them “directly next to” the Capitol building at about 2:30 p.m. — about 30 minutes after the demonstration had been declared a riot, the police accountability report said.

The officers told investigators that they had no idea that the event had turned violent, the report said.

But “nearby, and within your line of vision, numerous people were scaling a stone wall to the Capital steps, climbing the scaffolding, and crowds were surrounding the building,” the report added.

Diaz said the Everetts’ presence there was unacceptable: “More than a hundred officers sustained serious injuries – some career-ending – through outright assault,”

He added: ”Hundreds more, across all agencies called to respond, bear the physical and emotional scars of that day. The participation of these two officers in that crowd is a stain on our department, and on the men and women who work every day to protect our community, serve those in need, and do so with compassion and dignity.”

Both officers came to Seattle after working with police departments in Texas.

The officers worked together at the Dallas Police Department as patrol officers before they were married, according to police reports released through a public records request.

Alexander Everett graduated from the University of North Texas with a Bachelor’s Degree in criminal justice in 2008 and worked in Dallas for four years before taking a job as an officer in Round Rock, Texas. He also worked for the U.S. Air Marshals for more than 22 years, the records said.

Caitlin Everett worked for the Dallas police for four years under her maiden name Caitlin Rochelle, the records said.

It was not immediately know if the Everetts have a lawyer. The attorneys representing them and the four other Seattle officers in the public records case withdrew from the case after the accountability office investigation was completed last month.

Finding the Best Health Insurance Plan you can Afford