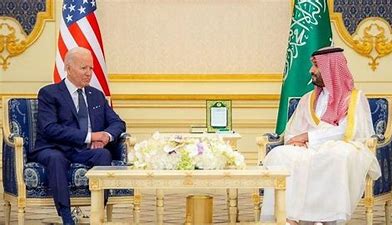 Sen. Bob Menendez, a Democrat from New Jersey, called on the US to “freeze” cooperation with Saudi Arabia on Monday in response to OPEC+’s decision to cut oil production in order to boost prices. He effectively accused Saudi Arabia of supplying Russia’s war machine while Moscow continues to invade Ukraine.

The head of the Senate’s committee on foreign relations, Menendez, criticized Russia for its attacks on Kyiv and other important towns and infrastructure in Ukraine. The battle was significantly escalated by the attacks on Monday, which were the first time in months that the Ukrainian capital had been attacked.

Menendez said in a statement that he was “horrified by Russia’s vile and desperate escalation of civilian infrastructure throughout Ukraine” and that he would employ all of his resources to “accelerate assistance for the people of Ukraine and to starve Russia’s war machine.”

Menendez continued by criticizing Saudi Arabia, the top producer of oil in OPEC, and charging it of “underwriting Putin’s war through the OPEC+ cartel.” Russia is one of the 23 oil-exporting nations that make up OPEC+.

“It is simply impossible to support both sides of this fight; either you oppose the rest of the free world in its efforts to prevent a war criminal from forcibly erasing an entire nation from the face of the earth, or you do. The Kingdom of Saudi Arabia made a horrible judgment based on economic self-interest when it picked the latter, “said Menendez.

The conflict between Russia and Ukraine has sparked a world energy catastrophe. In general, Russia is a significant supplier of natural gas and oil to the EU, but Western sanctions have targeted Russia’s energy sector in an effort to sever a significant source of income. Nevertheless, Russia still trades energy with nations like China and India.

In an effort to stop Russia from receiving more money from an increase in oil prices, the US attempted to persuade OPEC+ to refrain from cutting oil output but failed. The judgment was condemned by the Biden administration. With today’s declaration, it is obvious that OPEC+ is siding with Russia, according to White House spokesman Karin Jean-Pierre last week.

The US must “immediately halt all areas of our relationship with Saudi Arabia, including any arms sales and security cooperation beyond what is absolutely essential to safeguard US people and interests,” according to Menendez in his statement.

Bob Menendez has called for a complete halt in cooperation with the Saudi Government because of OPECS decision to cut back oil production.
It’s time we dumped them and start doing business with Venezuela. https://t.co/nOKwLDMIao

The New Jersey Democrat continued, saying “Enough is enough,” and that he would not “approve any collaboration with Riyadh until the Kingdom reassesses its posture with regard to the war in Ukraine.”

Since Jamal Khashoggi was brutally murdered by Saudi government operatives in 2018, the US and Saudi Arabia’s relations have been on rocky ground. A declassified intelligence dossier that was made public by the Biden administration last year directly linked the murder of Khashoggi to Saudi Crown Prince Mohammed bin Salman, often known as MBS. At the time of his death, Saudi citizen and Washington Post journalist Khashoggi was alive.

After Khashoggi was killed, there was a response in the US, with senators on all sides of the political spectrum urging a review of US-Saudi relations. Donald Trump, a former president, obstructed efforts to hold Saudi Arabia accountable for the murder of Jamal Khashoggi.

Joe Biden promised to declare Saudi Arabia a “pariah” over the death of Jamal Khashoggi when running for office. However, he has come under fire as president for how he has handled ties with the monarchy. Although Biden promised to take action to stop US backing for the Saudi-led coalition in Yemen, his administration continued to sell the country guns. Particularly harsh criticism was directed at the president for meeting with MBS in July. Biden attempted to persuade the Saudi monarch to raise oil output but failed.

Watch this, before you buy any stocks