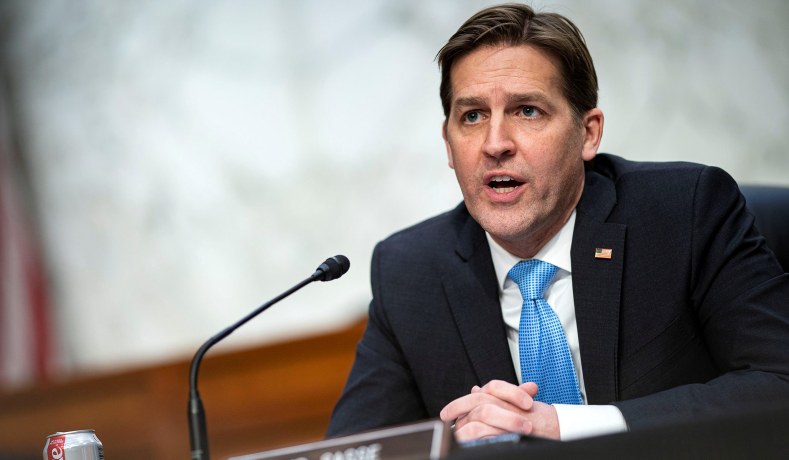 Nebraska GOP senator Ben Sasse gave a 30-minute speech on the Senate floor on Tuesday in defense of the keeping the legislative filibuster. The whole thing is worth watching, but the following excerpt was a particularly strong argument:

Each election will become more do-or-die, more Flight 93-ish than the last.

Each campaign would descend further and further into tribal ugliness. […]

If you want to see a politics that favors more candidates running for office with claims that they will be strongmen and tyrants, then make politics nothing more than a contest of wills between people who spend their campaigns promising to spend the next two or four years simply making the other side pay. If you want to see the rights and interests of minority groups scorned, dismissed and trampled, then establish a legislative process where minority voices don’t need to be heard at all. That’s what would happen if we end the super-majority requirements that have always dominated the Senate from its first day. If you want a lame, mean politics that aims only to own the libs or drink conservative tears, this is how you bring that crap show about. You’d set the Senate on fire.

[Democratic senator Brian Schatz] recently said that the filibuster is quote “stupid” and “paralyzing.” He also said “it’s time to trash the Jim Crow filibuster.” But just four years ago when Donald Trump was elected and House Republicans were itching to have the Senate eliminate the filibuster because Republicans controlled the House, the Senate and the White House, Senator Schatz and a bunch of his colleagues actually penned a public letter that defended the filibuster and all of its quote, “existing rules, practices and traditions,” close quote, precisely because it advanced the deliberative purposes of the Senate.

I don’t remember Senator Schatz then calling it the Jim-Crow filibuster when he wrote that letter, or when he was blocking Tim Scott’s police reform legislation last year by pointing to the Senate super-majority requirement rules.

I don’t remember Senator Schatz calling it stupid when he filibustered COVID relief in September and again in October under the Senate’s current rules. Look, I want to be clear, I’m not picking on Brian, I’m naming him precisely because I like him and afterwards we can argue about this […]

There isn’t much right now, but there’s still a chance for reform of this institution. Ending the filibuster is to end this institution. But to be clear, this isn’t about Senator Schatz. I could give a hours and hours-long speech going through all the flip-floppers in this chamber who had one position 48 months ago and now have a completely different position. I don’t need to name all of them, we should just say, “what changed?” We know what changed. The only thing that changed in the last two years is who’s in power. When Democrats were in the minority, you were fierce defenders of this “indefensible Senate prerogative.”

That was the language that was used. The filibuster was “standing between America and fascism,” we heard. But now, when you’ve got the slimmest majority, actually it’s just 50-50 and you need the VPs’ motorcade to break a tie, now the filibuster is standing between you and some of your legislative goals, and therefore it needs to be tossed out. But when you were using the filibuster to halt Senator Scott’s police reform bill, the filibuster was an essential American institution that forces compromise. But now that it can be occasionally used to resist a 51-50, straight majoritarian exercise of power, it’s supposedly exclusively a relic of slavery and a tool of Jim Crow. It’s nonsense and the people saying it know that it’s nonsense. They use the same rule last year and you weren’t racist when you used it last year. This is B.S. that has been focused grouped and particular bills are being used as the excuse to grab power that won’t just be for this bill, it will be forever. It will be the end of the Senate. Was the filibuster really a tool of Jim Crow when it was used against Tim Scott last year? I don’t think so. And I don’t think any of you think so.

CRT:School Closures Reveal Progressivism for What It Is