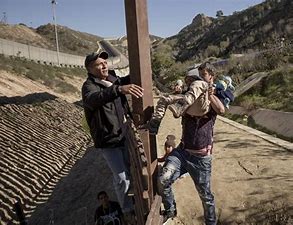 Fox News Digital obtained a report by the Senate Foreign Relations Committee Republicans that describes the Biden border crisis as a “humanitarian catastrophe for the vulnerable people involved” as well as noting national security concerns. The report offers some solutions to curb the flood of illegal migrants at the border. The report is titled “Biden’s Border Crisis: Examining Policies that Encourage Illegal Migration”.

Ranking member James Risch (R-ID) pointed out that the record breaking numbers of apprehensions have been happening since Biden took office. This is a deliberate kind of pain that the country is facing. Joe Biden thinks he has a mandate to transform America where none exists. He insists on killing off the fossil fuels industry and we see the effects of the energy crisis. The same is true with the porous southern border. In his first days in office, Biden signed executive orders ending deportations for illegal aliens already here and he ended the Remain in Mexico agreement put together by the previous administration and the Mexican government, for example. Migrants coming over the border think they have an open invitation from the Biden administration and essentially, they do.

Just as Biden will not meet with oil and gas executives at the White House tomorrow, he has never been to tour the southern border and see the mess he has created with his own eyes. If it was a Republican president who had such a humanitarian and national security crisis on his hands, well, we know the press would make that story a regular headline, right? As it is, Fox News is really the only outlet who reports daily from the border. Democrats and their cohorts in the press see future Democrat voters. Logical Americans see a humanitarian crisis along the border and in surrounding communities. They also see national security risks when a nation’s borders are not secured. There is no national sovereignty without secure borders. As president, securing the borders is Biden’s number one obligation. He is deliberately not doing his job, a dereliction of duty.

Biden handed off the management of the southern border to Kamala and we see the results. Conditions are worse, not better. Kamala likes to talk about root causes but that’s code for writing checks to corrupt dictators in Northern Triangle countries. In the past that has been tried and yet here we are. Kamala has no new ideas and shows little interest in the subject. She, too, has refused to tour the border. She made one very quick trip to El Paso and stood for some pictures and glad handed some border agents. That was about it. She brought along DHS Secretary Mayorkas on that visit. It was a joke.

The humanitarian crisis on the southern border feeds the cartels. The report refers to them as transnational criminal organizaations (TCOs). They profit handsomely from smuggling drugs and trafficking human beings across the border. Senate Republicans offer some suggestions to curb the flow of illegal immigration.

The report also highlighted how “transnational crime, migration management, and border security issues” in Mexico and Central America have contributed to the influx of illegal immigrants on the southern border.

“The Biden Administration’s disastrous immigration and border policies, combined with the growing numbers of outward migration from the Western Hemisphere and TCOs’ evolving human smuggling and trafficking tactics, have a detrimental impact on the safety and security of the United States,” the report read.

The report called on the Biden administration to take several steps to stem the flow of illegal immigration across the southern border, beginning with strengthening border security.

“Not only will stronger immigration controls protect our own national borders, but they will signal U.S. political will to meaningly address illegal immigration to governments in the region, and signal to TCOs and would-be illegal migrants that they cannot illegally enter the United States with impunity,” it read.

The United States should also work with Mexico and Central America to improve regional security and migration management, the report stated.

It doesn’t take a report from the Senate Foreign Relations Committee to alert Americans about the humanitarian crisis on the southern border – except maybe for Americans who absolutely never tune into Fox News. It is a crisis that has produced such tragedies as record numbers of unaccompanied minors crossing the border with adults to watch over them. Border Patrol agents encountered over 500 migrants in three large groups over the past four days. Officials said the were from Cuba and other Central and South American countries. There were 293 family members, 145 unaccompained children and 95 single adults. They were apprehended in Starr and Hidalgo countries, the Rio Grande Valley area in Texas. That number is just from the last four days.

There is a lawsuit filed by Texas and Missouri that is moving through the legal system, Biden v. Texas, which is meant to stop the Biden administration from halting the Migrant Protection Protocols, also known as the Remain in Mexico policy. Filings from that lawsuit are being pieced together by the Center for Immigration Studies, which favors tighter restrictions on immigration. The numbers coming from the filings are staggering.

As part of the suit, the Department of Homeland Security has been required to produce information on how it handles illegal border crossers. How many are turned back? For what reason? How many are allowed to stay in the U.S.? The numbers, as Arthur has collected them, are troubling.

The big number is that the Biden administration has admitted 1,049,532 illegal border crossers into the U.S. That is greater than the population of Wyoming, Vermont, Alaska, North Dakota, South Dakota, Washington, D.C., and the president’s home state of Delaware. It’s a lot of people. And remember, it is the total number of illegal border crossers allowed to stay in the U.S., not the total number caught at the border.

The number is far, far bigger than in the past. “By way of comparison,” Arthur writes, “that [1,049,532] is more people released into the United States than the total number of migrants Border Patrol agents at the Southwest border apprehended in any given fiscal year between 2007 and 2020.”

Worse yet, those numbers don’t include the got-aways, single adults and families, or unaccompanied minors. “So put together the three categories of illegal border crossers, the individual adult crossers and families allowed to stay, the unaccompanied children, and the got-aways, and the total number of illegal border crossers allowed to remain in the U.S. approaches 2 million, just since Biden entered the White House.”

I hate to say it but none of this will change until something truly horrible happens on the border, something horrible like a terrorist attack. Biden refuses to ever admit any mistakes and he certainly never admits to producing bad policies. Sooner or later, our luck will run out. Biden just doesn’t care.

Embassy tells Americans in Afghanistan to find their way to the...

The Aftermath of an Afghanistan Fallout