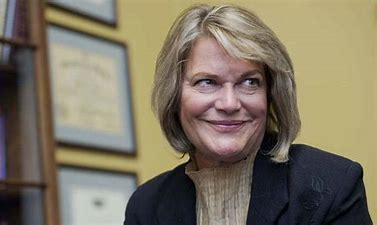 A Republican from Wyoming, Senator Cynthia Lummis was a keynote speaker during several University of Wyoming commencement ceremonies in Laramie during the weekend. One speech quickly went off the rails when she dared to speak truthfully about science and “two sexes”. Some members of the audience loudly booed her, interrupting her speech for 25 seconds. She has since apologized.

Everything seemed to be going ok until Lummis, a graduate of the University of Wyoming, spoke about a scientific truth. That truth is that there are two sexes, male and female. After the interruption to her speech, she made a point to say, “I’m not making a comment about the fact that there are people who transition between two sexes.”

U.S. Sen. Cynthia Lummis (R–WY) was loudly booed during her University of Wyoming commencement speech yesterday after remarking “even fundamental scientific truths such as the existence of two sexes, male and female, are subject to challenge these days.” pic.twitter.com/k9SVxe0GmC

The speed in which she speaks appears to have been altered in that clip but you can hear what she said and the audience’s reaction. She speaks at a normal speed in other recordings. Anyway, graduates were triggered enough to boo and jeer and interrupt the speech. Lummis was speaking in the context of her belief in “individual responsibility in safeguarding the constitution and the liberties it ensures,” making it a central theme of her speech.

It is unclear to me why she chose to include such a statement on the sexes, especially to a college-aged audience, but she did. If this is a big enough concern to her, why did she apologize? She said it was a scientific truth. It is. It’s a fact that babies are born either male or female. Gender fluidity is a relatively new discussion and it’s a part of the LGBTQ agenda to normalize what is typically bisexual behavior. Identifying as neither male nor female allows that person to have sex with either men or women, right?

Republicans have to stop apologizing for speaking out with truthful statements. It is not hateful to speak truthfully, even when feelings are hurt.

A spokesperson for Lummis responded to a request for comment Sunday, with the senator saying through a statement that she was apologizing to those who felt “un-welcomed or disrespected” by the comments.

“My reference to the existence of two sexes was intended to highlight the times in which we find ourselves, times in which the metric of biological sex is under debate with potential implications for the shared Wyoming value of equality,” the statement read.

“I share the fundamental belief that women and men are equal, but also acknowledge that there are biological differences and circumstances in which these differences need to be recognized. That being said, it was never my intention to make anyone feel un-welcomed or disrespected, and for that I apologize. I have appreciated hearing from members of the University of Wyoming community on this issue, and I look forward to continuing this dialogue.”

Senator Lummis is where a lot of people are – men and women have equal rights but there is a biological difference between men and women. Look at what is happening to women’s sports in college. Trans women are canceling women’s sports. It’s not fair to biological women who have worked for years to achieve their level of skill to compete at the college level. Many receive sports scholarships. There are areas where a level playing field does not work, including trans people in sports.

“One of our speakers made remarks regarding biological sex that many on campus take issue with,” he said. “While we respect the right of all to express their views, from students to elected officials, we unequivocally state that UW is an institution that supports and celebrates its diverse communities that collectively make us the wonderful place that we are.”

A statement was released by the Inclusion Council at the university.

The university’s Inclusion Council – which consists of the dean of students, the director of the School of Culture, Gender and Social Justice and other staff – released a statement Monday that took issue with the accuracy of Lummis’ statement as well as its impact on members of the campus community.

“We are committed to creating a campus where ALL members can safely live as their authentic selves as they navigate their educational experience and contribute to campus and community,” the statement read. “All sexes and genders are welcome at the University of Wyoming, and we deeply regret the harmful impact these words at our graduation ceremony may have had on those graduating as well as their families and friends.”

The statement also noted that people can be born intersex, meaning that they are not born strictly male or female.

“Intersex members of our community who have diverse chromosomal makeup should be seen and recognized,” the statement said.

The senator apologized because politicians have been conditioned to do so as soon as someone complains. Otherwise, they will be canceled on social media. Wyoming is a deep red state but she was delivering this speech in Laramie where a trans student committed suicide this year. Also, the memory of Matthew Shepard’s murder 24 years ago may play into some of the reaction. It is a red state, but the university population is no different than many other universities.

This is a good reminder that the discussion of sex or gender has no place in these speeches. Both conservatives and progressives should stick to the topic at hand – the celebration of college graduations. Just as conservatives don’t want to hear progressive rants, the same is true for the other side. Lummis didn’t rant but it was not an appropriate statement to insert into her speech. Then, she undercut her statement with her apology. It didn’t have to happen and she shouldn’t have apologized when it did. This was an unforced error on her part.

Whatever shouts ‘spring is here’ to each of us, we’re ready...