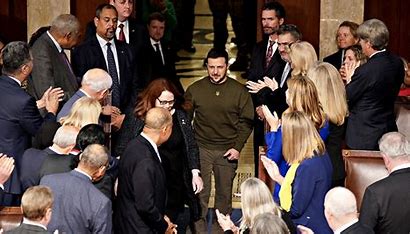 In its yearly budget plan, which was unveiled early on Tuesday, Congress allocated an additional $45 billion for emergency aid to help Ukraine fend against Russia’s invasion.

Following a $40 billion package signed into law in May, a $12 billion supplement in September, and $800 million authorized in Congress’ defense spending budget, the bill is the largest assistance package from Congress for Ukraine to date. This will bring the total anticipated support for Ukraine in 2022 to close to $100 billion. Despite some Republican opposition to writing Ukraine a “blank check,” it exceeds President Joe Biden’s $37 billion request for military, economic, and humanitarian support.

According to The Associated Press, Senate Majority Leader Chuck Schumer of New York said that passing the omnibus bill is essential for helping our friends in Ukraine. In accordance with the FY2023 National Defense Authorization Act, which was approved by the Senate last week, Congress authorized $858 billion for defense spending.

The bill states that it includes $11.9 billion to support future drawdowns of U.S. weapon inventories and replacement with modern hardware until September 2024, as well as $9 billion in direct military assistance under the Ukraine Security Assistance Initiative. Other funds are used to increase procurement thresholds, expand research and development initiatives, and improve the American military presence in Europe.

It also instructs the Secretaries of State and Defense to report to Congress within 45 days of the bill’s passage on the steps taken to ensure that weapons provided to Ukraine reach their intended recipient and are used for that purpose, as well as “any other measures to promote accountability” for the use of such weapons. The secretaries were also instructed by the appropriators to report on any unauthorized transfers of weapons supplies.

The measure adds restrictions aimed at protecting cash transfers and directs the U.S. Agency for International Development, along with the Departments of State and Defense, to enter into a contract with a third party for weapons surveillance.

Along with financing for nuclear security from the Department of Energy, Congress also approved at least $12.9 billion for economic help and $2.4 billion for refugee resettlement in the United States.

Sen. Josh Hawley of Missouri called the assistance “not in America’s interests,” and Rep. Marjorie Taylor Greene of Georgia claimed in October that the billions in U.S. funding only served to prolong the war with Russia. Some Republicans have criticized the apparent open checkbook the U.S. has offered to Ukraine. However, the majority of GOP members have backed maintaining aid and support for Ukraine as a strategy for dealing with America’s adversaries while protecting the lives of American soldiers.

Senate Minority Leader Mitch McConnell of Kentucky said after the NDAA’s passage that “every day Russia spends on the back foot in Ukraine diminishes its own ability to wage subsequent wars and drastically impacts the cost-benefit analysis for those who might contemplate similar actions.” Additionally, $2 billion in foreign military aid for Taiwan in 2023 is supported by the omnibus budget plan in order to deter Chinese aggression toward the disputed island.

In what has sadly become a shameful norm, Congress releases a $1.5 trillion spending package in the dead of night and aims to rush it through without substantive debate or opportunity for amendments in the next couple of days. https://t.co/PkIzXioTgW