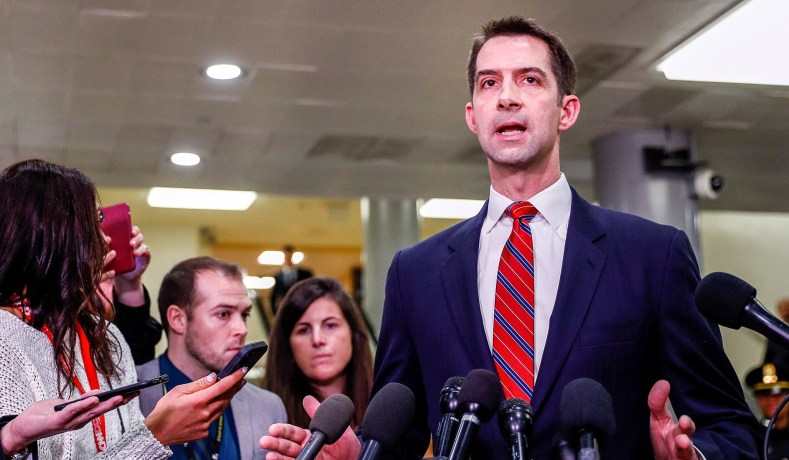 Julia Craven didn’t much like the questions that Senator Tom Cotton (R., Ark.) asked attorney general nominee Merrick Garland in confirmation hearings, but mostly she seems to have wanted an excuse to list some reasons she doesn’t like Cotton in Slate. Her passage, my footnotes.

This is the senator who, during a self-commissioned PR campaign against the New York Times’ 1619 Project over the summer, referred to enslavement as a “necessary evil” (1) and introduced legislation that would bar schools that teach the project from receiving federal funds. Cotton championed the idea that the military should shut down protests (2) during the largest anti-racism demonstrations in American history. He also compared that uprising to racist mobs trying to prevent school desegregation (3). He bookended the thought by introducing legislation that would prevent anyone convicted of a federal offense at a protest from receiving coronavirus-related unemployment funds (4). In 2015, he returned a campaign donation from a racist cited in Roof’s manifesto (5).

1) Cotton’s remark, in an interview, was unfortunately phrased. But I think what he was trying to say is defensible: It was necessary for the Constitution to allow slavery because it would not have been adopted if it had forbidden it; but its adoption put slavery on the path to extinction. I think Cotton’s remarks should be read this way because it is the charitable interpretation, because it makes the most sense of his “course to extinction” wording, and because it’s a very common perspective.

2) Cotton’s op-ed distinguished between peaceful protesters and rioters, said it was “revolting moral equivalence” to fail to distinguish between them, and urged action against “lawbreakers.”

4) While Craven presents this legislation as self-discrediting, which is perhaps related to her own failure to observe the distinction Cotton makes between peaceful protesters and rioters.

5) It often comes to light that a candidate has received money from nutty and vile people, at which point the candidate often turns down the money. Using a repudiated donation as an indictment is a particularly lame form of guilt by association.

Reagan: No heroes would ever have to die for us again