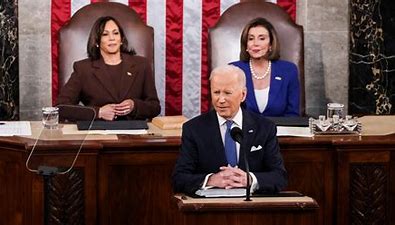 Well, as we all expected, Biden’s State of the Union is a complete and utter disaster.

Not even ten minutes into the thing, he was already slurring words and jumbling sentences… just an absolute laughingstock.

This first clip shows Biden saying “pound” instead of “proud” when referring to the Ukrainian people. Then he continues to stammer on saying pound over and over again.

WHAT IS HE EVEN SAYING pic.twitter.com/l4a9GDbj71

What on earth is he even saying?!

Of course, much of his speech centered around Ukraine, so, it would help if he could actually say the name of the country.

Here’s another clip where he calls the Ukrainian people, the Iranian people…

My God, how embarrassing.

“Putin may circle Kyiv with tanks, but he’ll gain the hearts and souls of the Iranian people.” pic.twitter.com/led9r2OHMv

I bet the Ukrainian people feel great having this guy standing behind him, especially in this bit where he reassures them that U.S. forces are not coming to Europe to “fight Ukraine.”

Was that ever on the radar? Was the US going to “fight Ukraine” and nobody told me?

What is this blithering idiot even talking about?

BIDEN: “Our forces are not going to Europe to fight in Ukraine, but to defend our NATO Allies in the event that Putin decides to keep moving west. For that purpose, we have mobilized American ground forces, air squadrons, ship deployments to protect NATO countries…” pic.twitter.com/ycU00koKzf

Even though Biden barely makes any sense, the Democrats are eating this up.

Especially Chuck Schumer, who can barely figure out when to clap for this appalling speech.

Chuck made an ass of himself, and this awkward clap/non-clap/clap move has gone mega-viral.

Schumer timing his applause wrong is the cringiest thing I’ve ever seen pic.twitter.com/Zs4iSkDCDk

This is just beyond embarrassing.

But believe it or not, it gets even worse, folks…

Here’s another clip where Biden can barely complete a sentence talking about what we’re guessing is the “rust belt???”

It’s a crap-shoot, who really knows what he’s saying here…

Biden completely malfunctions while delivering a line about the rust belt. pic.twitter.com/dLD1ACE5Tz

And then Biden had to touch on the vaccine he’s been touting.

But he caused Don Jr and the rest of America to have a “WTF” moment.

Did he just say the border wall is going to “keep out” the vaccine?

Yes, he sure did…

This entire thing is beyond horrific and the sad part is that these clips aren’t even halfway through this speech.

No one really summed up just how bad Biden’s SOTU better than Matt Walsh did in this short tweet:

Is anyone else concerned that the President of the United States can barely speak?

I’m sure everyone watching this thing is concerned.

Even liberals have got to be quietly cringing over this mess.