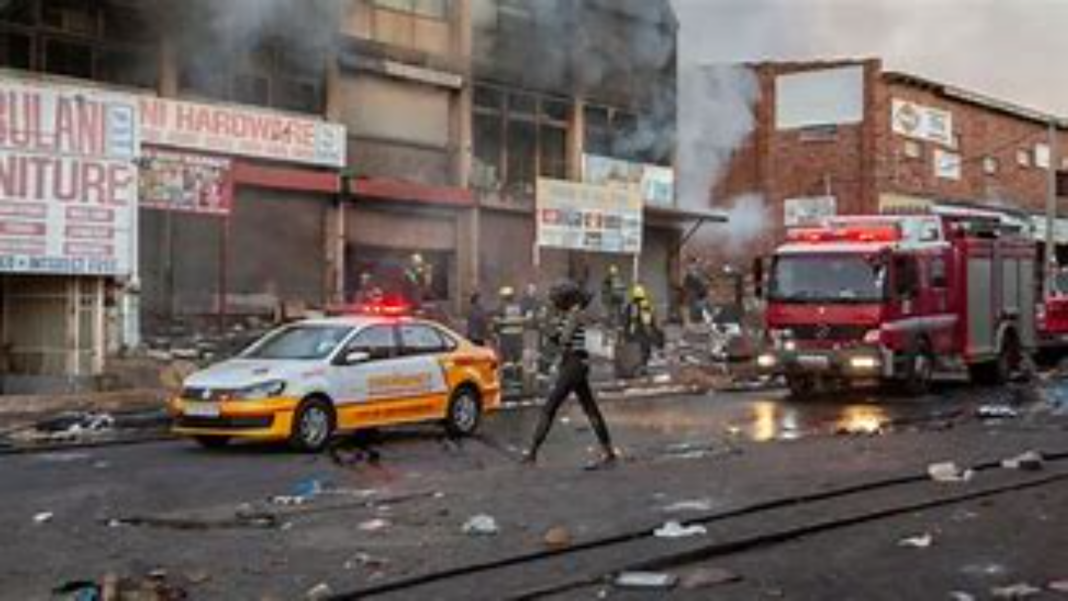 The police are trying to recover stolen goods, but a government minister says they can’t be resold and must be destroyed. Employees at the looted stores worry they may have no jobs to go back to. Some freight companies may follow retailers into bankruptcy. Even oil supplies were cut off.

A security expert from KwaZulu-Natal says people should prepare for further unrest — though it’s unclear what they are supposed to do. In some places, the police were nowhere to be seen. Some whites and Indians took up arms, but the police told them to stand down. One of the first acts of the South African government after apartheid was to abolish white self-defense organizations and restrict the right to bear arms. Guns were looted — in a country where ordinary people rarely have them.

Sewpersadh says all barricades that have put in place by community protection groups should be removed from roadways and access points. Sewpersadh says that failure to comply with instructions by the SANDF could lead to members of the public being removed by force. #sabcnews

Sewpersadh says all barricades that have put in place by community protection groups should be removed from roadways and access points. Sewpersadh says that failure to comply with instructions by the SANDF could lead to members of the public being removed by force. #sabcnews

The attacks on farms were ominous. For years, there has been widespread violence against white farmers. Journalists and liberals have denied it is happening in a systematic way. Indeed, anyone who mentions the killings is met with outrage. During the riots, farms were not spared.

Sugar mills shut down and citrus exports stopped. Some think this could lead to famine. Already, starvation was reportedly threatening because of Covid. After the riots, police had to protect food convoys. Food shortages led to long lines in Durban.

If there is famine, the media will campaign for a bail out from the West.

South Africa’s troubles are not over. There are continuing power shortages. The tension between different racial groups is a permanent part of the “Rainbow Nation.” Just a few weeks ago, Economic Freedom Fighters head Julius Malema blasted an “Indian cabal” that he claimed controls South Africa. The Indians are tools that “white monopoly capital” uses to keep control.

The riots highlighted black/Indian tension. Some blacks were furious that Indians were shooting at blacks during the riots. They didn’t care about arresting looters; they wanted police to disarm Indians.

Briyana & Indian curry is blinding our leaders, In Phoenix Black People are killed in pure Racism Cold blooded.Cele police are going door to door in Alex recovering looted goods but they cannot do the same in Phoenix to recover the guns that killed our Blacks. #PhoenixMassacre https://t.co/cyJkl8G9ON

The Wall Street Journal asks if the ANC government will learn the “lessons” of the disaster. It won’t. That would require that it cease to be African — although being African has advantages: Ilana Mercer accurately noted that the government took a harder line on looting than ours did. The country is trapped in a poisonous feedback loop. President Ramaphosa understands that he has to restore order to keep the economy going; it was already struggling from the pandemic. Almost $3.5 billion has been lost in the riots and further disruption will cost more.

However, economic measures will only fuel suspicions that Mr. Ramaphosa is a sellout to “white monopoly capital.” In 2019, the Economic Freedom Fighters party called him a “white monopoly capitalism stooge.” Defending or helping property owners (white, black, colored, or Indian) won’t make the EFF change its mind. Many blacks think Indians are, at best, a tool used by whites to keep them down. At worst, as we saw on social media above, they are murderers. The fight between blacks and Indians isn’t new. In “democratic” South Africa, even “Gandhi Must Fall” because he didn’t like blacks.

This means any measures Mr. Ramaphosa takes to restore economic trust will fuel black radicalism. The EFF will continue to draw support from the left-wing of the governing African National Congress. Jacob Zuma probably won’t stage a comeback, but his long record of anti-white vitriol will attract those who blame inequality for South Africa’s troubles. Whites and Indians will be scapegoats.

The true lesson of South Africa isn’t just that a white-run black country descends into the Third World when blacks take over. We don’t need South Africa or Zimbabwe to show us that. We have American cities.

The real lesson is that even with whites dispossessed, you don’t get racial harmony. In America, we could give away everything and it would make little difference. In South Africa, If whites disappeared, there would still be tension between Indians and blacks and between black tribes. It would be a constant struggle to keep the system going well enough to keep international investment from fleeing. China might take over. There would still be countless indigent, radical blacks who can’t understand why they are poor. If everyone is equal, there must be discrimination by someone. After decades in power, the ANC is running out of excuses. It gets harder every year to believe that the “legacy of apartheid” is the problem.

Of course, the excuses will keep coming. On “Mandela Day,” South Africans of all races came out to try to repair the damage. This was noble. However, destroyed businesses, shattered trust, and lost lives can’t be cleaned up as easily as broken glass. Vague talk about everyone working together is not a plausible way forward. I suspect EFF head Julius Malema’s more direct message about “white monopoly capital” and its stooges is more convincing. There is something absurd about police tracking down stolen goods, only to destroy them. Explain that to poor blacks.

Where does this leave whites? They lack the numbers and the international support to “retake” South Africa. Maybe whites, Indians, coloreds, and even some blacks of good will could build a redoubt where some semblance of civilization could be maintained, but the same racial divisions would probably doom such a project. It would be best for whites to pursue self-determinations at any level possible. Shouldn’t every Afrikaner be moving to Oriana or something like it? Mr. Ramaphosa will do just enough to keep businesses functioning and not scare the markets, but he won’t defend white interests. With the African population boom, South Africa is the fate awaiting every Western country that cannot keep blacks out. Hispanics and Asians should be paying attention. Even blacks who dream of owning property, living in nice communities, or simply avoiding bullets should also be worried. They should think carefully about whether they really want a black-majority country or a black-majority world. Not even the co-founder of Black Lives Matter wants that. Look where she lives.

But immigration curbs just limit the damage. We need a place of our own. For the West to survive, we must live on our own terms. “Only we can be us,” said Jared Taylor, and only we can build our civilization. We need to get serious about starting our own communities. We’re a global minority. If we don’t defend ourselves, no one else will.

May 2021—Another Month In The Death Of White America. (And Whites Aren’t Fighting Back, Unlike Tulsa 1921)