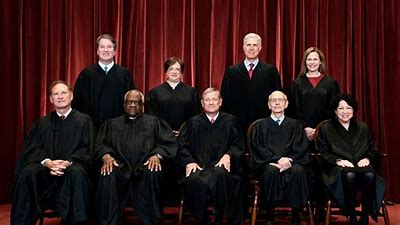 My guess is that he had pre-written this tweet to use when the Dobbs decision came down and accidentally hit “publish” in a fit of excitement when the Bruen case dropped instead.

If I’m wrong and this really is his reaction to Bruen, I can’t imagine what he has planned for Dobbs. A livestream of him crying, maybe.

Go ahead and treat this post as a palate cleanser rather than news. After all, at this stage of Olby’s career, this is basically just a random dude on Twitter freaking out to everyone’s amusement.

It has become necessary to dissolve the Supreme Court of the United States.

The first step is for a state the “court” has now forced guns upon, to ignore this ruling.

Great. You’re a court? Why and how do think you can enforce your rulings?#IgnoreTheCourt

“If your aim is to impose strict gun control, pushing the idea that following the law is optional is probably not the best course,” replies Charles Cooke.

Cooler heads on the left are urging that we not dissolve the Court proper, merely its institutional legitimacy:

Today, the far-right Court has gone out of its way to expand the Second Amendment and undermine public safety, while shrinking the Fifth Amendment and taking away Miranda rights. We cannot allow this overtly political Court to stand in the way of our safety. Expand the Court.

It’s a wonder and a marvel that members of the “party of norms” are farting out ideas like this in the middle of the January 6 hearings, knowing that Trump is the current favorite to be president in 2025. Every flourish of norm-busting from the left will be used by Trumpists to defend future norm-busting by the right. I bet Olby’s idea of ignoring court decisions when you don’t like the results would play especially well at Mar-a-Lago.

His was the hottest take I saw this morning but the competition was stiff.

It’s crazy that Rs now consider ANY election Ds win, or ANY political outcome they dislike, as illegitimate, while Ds are such conservative institutionalists they won’t treat the SCOTUS majority as illegitimate despite the actual illegitimacy of the Senate, EC & Trump presidency.

If the court wants to play stupid political games, then the other branches can too. If the filibuster prevents this in Congress, then Treasury can simply withhold the funding. There’s nothing too petty for me at this point. https://t.co/yHYoCdqIb9

How tone-deaf to America’s very real gun violence epidemic can the majority in the Supreme Court be?

This is a disgrace.

Believing the Court should be careful not to be “tone-deaf” in interpreting the Constitution betrays a curious understanding of what a judge’s role is. But, amazingly, even formerly well-respected lawyers are grumbling along those lines:

SCOTUS read neither the room nor the Constitution correctly

Bharara used to be U.S. Attorney in Manhattan, one of the most elite prosecutorial jobs in America. Back in the day, I’d like to think he understood that a court’s job isn’t to “read the room,” especially when it’s weighing constitutional rights. Just the opposite — the reason we have rights is to protect us from the worst, most overzealous impulses of “the room.”

Here’s the one that got me. Meet Obama’s former (acting) solicitor general:

There’s a written right to keep and bear arms reflecting a practice that was widely regarded as legal at the Founding but no written right to have an abortion, which wasn’t widely regarded as legal at the Founding. Where’s the confusion? The equivalent of Katyal’s tweet 90 years ago would have been “Gonna be very weird if Supreme Court ends a constitutional right of freedom of contract next week, saying it should be left to the States to decide, right after it just imposed a constitutional right to free speech, saying it cannot be left to the States to decide.” The fact that a right is explicit in the Constitution matters to whether it’s constitutional, which in turns matters to whether states can regulate the conduct covered by that right. Wild, no?

Let’s pause here to reflect on how little was at stake in the Court’s ruling today. New York was one of only a handful of states to follow a “may issue” regime in granting concealed carry permits, giving the state all but absolute discretion in deciding who gets to carry a gun lawfully and who doesn’t. In 42 states, the regime is either “shall issue,” in which the state must grant a permit provided that an applicant meets certain basic qualifications, or “constitutional carry,” in which residents can carry without a permit. Once you arrive at the basic conclusion that a right to “keep and bear arms” includes a right to bear arms then a “may issue” regime is constitutionally impossible. By definition, a right that can be ignored by the state in its absolute discretion isn’t a right at all. It’s a privilege.

But New York’s new governor is freaking out about today’s ruling anyway, which is unsurprising given that she has an electoral incentive to do so. She’s on the ballot four months from now in a blue state.

Gov. Kathy Hochul (D-NY) says she is “prepared to call the legislature back into session” in response to the Supreme Court striking down the state’s concealed carry law:

“We’re not going to cede our rights that easily, despite the best efforts of the politicized Supreme Court.” pic.twitter.com/HoIhrRwT0P

I’m not getting a strong “party of norms” vibe from that second clip about trying to work around the ruling of the “politicized Supreme Court” either. As for Hochul’s point about muskets, Clarence Thomas dealt with it in today’s majority opinion. Liberals keep resorting to it and they keep sounding stupid when doing so relative to how the Court routinely interprets other constitutional rights:

Just gonna put this here. I will not be taking questions. pic.twitter.com/azm79DoYSe

Here’s something that should cheer Hochul up, though. The Court didn’t say that the state can’t restrict concealed carry at all; of course it can, limiting the practice to people without a criminal record, for instance. “Shall issue” regimes are still legal under the Second Amendment. What a state can’t do is decide arbitrarily who gets a permit and who doesn’t. If you have a right to carry a gun, necessarily that right can’t depend on the whims of the government. That’s the defect in a “may issue” regime.

No, background checks are not imperiled by this decision either. pic.twitter.com/XA0Th1T0oA

It’ll be fascinating to see what happens in New York, especially New York City, once the state transitions to a “shall issue” regime. How many more New Yorkers will be packing? What will happen to the crime rate? Will criminals begin to think twice, not knowing which of their potential victims might respond with lethal force, or will the proliferation of guns lead to more suicides, accidents, and crimes? I can’t wait for the first poll next week.

Second Amendment August 15, 2022
The title of the page
Go to mobile version