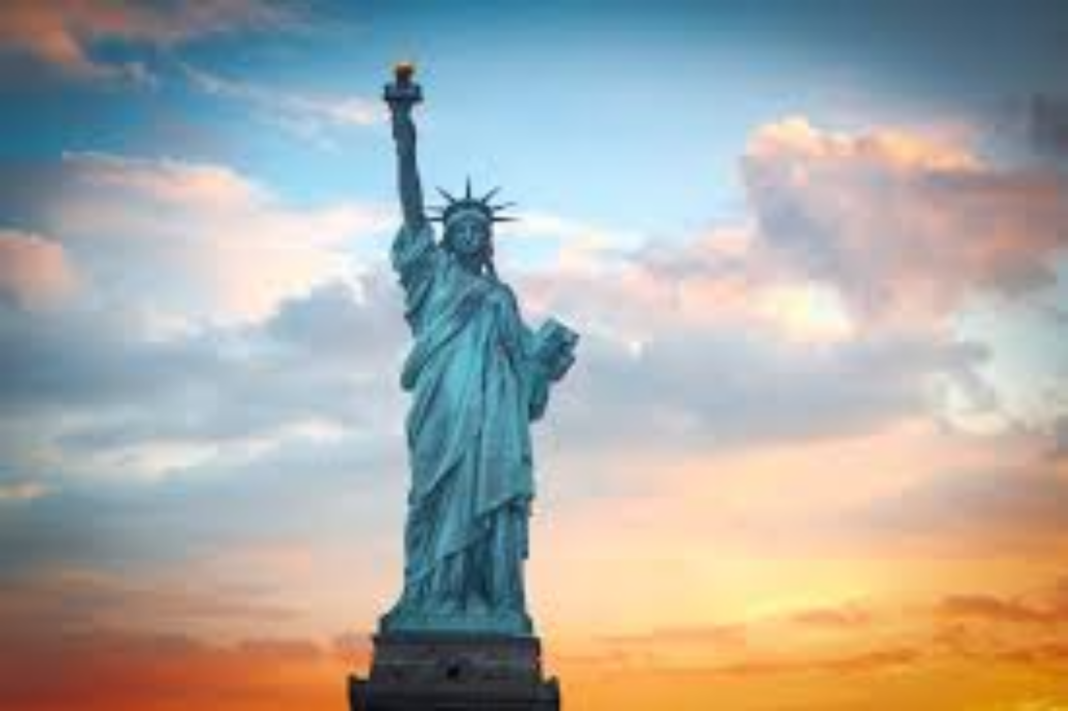 It isn’t really clear why France is sending over a “little sister” version of the Statue of Liberty to the United States but it is. Just in time for Independence Day celebrations, the second Statue of Liberty will arrive in New York City and be installed on Ellis Island from July 1 to July 5.

The new bronze statue is one-sixteenth of the original version that stands on Liberty Island. The little sister was loaded into a special container during a ceremony Monday at the National Museum of Arts and Crafts (CNAM) in central Paris. The statue was installed in the museum’s garden in 2011. It is over 992 pounds and just shorter than 10 feet tall. It was made in 2009 and is an exact replica of the original 1878 plaster model preserved by the museum.

That’s all well and good, but why are they gifting us with this replica and why now? Well, it seems we are to consider it a gesture of friendship. Statues, in general, are all about symbolism and this one is no different.

“The statue symbolizes freedom and the light around all the world,” said Olivier Faron, general administrator of the CNAM. “We want to send a very simple message: Our friendship with the United States is very important, particularly at this moment. We have to conserve and defend our friendship.”

The replica bears the same neoclassic design as its “big sister” in New York, who represents the Roman goddess Libertas and measures 151 feet tall atop the giant pedestal. She is imbued with symbolism: the crown with seven spikes, representing sun rays extending out to the world; a tablet inscribed with America’s date of independence in Roman numerals; and broken chains and shackles lying at its left foot, signifying the abolition of slavery in the United States.

Given the timeliness of Black Lives Matter and Critical Race Theory, a statue with a slavery reference will fit right in. The ceremony at the museum was held on a symbolic day, too. It was just after the 77th anniversary of D-Day during World War II. It’s interesting that the French referenced the importance of that day in the relationship between our two countries when Joe Biden was criticized for not noting the D-Day anniversary in a timely manner here in the United States.

The original Statue of Liberty was a gift of friendship from France in 1886. It was meant to strengthen our friendship at a time when historians wrote that the relationship was waning. Is this what Macron thinks now? That would be odd, given that nothing much has changed. He and Trump had a decent working relationship and met with his several times, both in Europe and at the White House. Joe Biden is desperate to bring back a status quo relationship with European countries – a time when American presidents were more concerned about what European leaders thought about the U.S. than entering agreements that best served regular Americans. We are back to the days of Obama and Biden with climate change as a top priority and turning a blind eye to evil dictators like Putin and Xi. Joe’s already put Russia and Germany’s energy needs above America’s by giving the green light to the Nord Stream pipeline. Getting along with French leadership will be a piece of cake.

The little sister statue will travel to New York as the original one did. It will only be temporarily displayed in New York City, though. It will be moved to Washington, D.C. for 10 years.

The journey for the “little sister” has just begun: Following the footsteps of the original statue, it will board a ship at the port city of Le Havre on June 19 and reach New York on July 1. Its final destination will be Washington, DC, where it will be on display for 10 years at the French ambassador’s residence.

This isn’t the first time a replica of the Statue of Liberty found its way to the United States. In 2011, a nine foot tall statue was purchased by real estate developer Leonard Stern and brought to the U.S. It was put in front of a Madison Avenue skyscraper. At the time, the French government was allowing 12 copies to be made from a miniature plaster model of the original statue made by its sculptor Bertholdi. Using new digital technology, France used the model to cast copies. Stern was happy to pay over $1M in order to get one of the 12 copies.