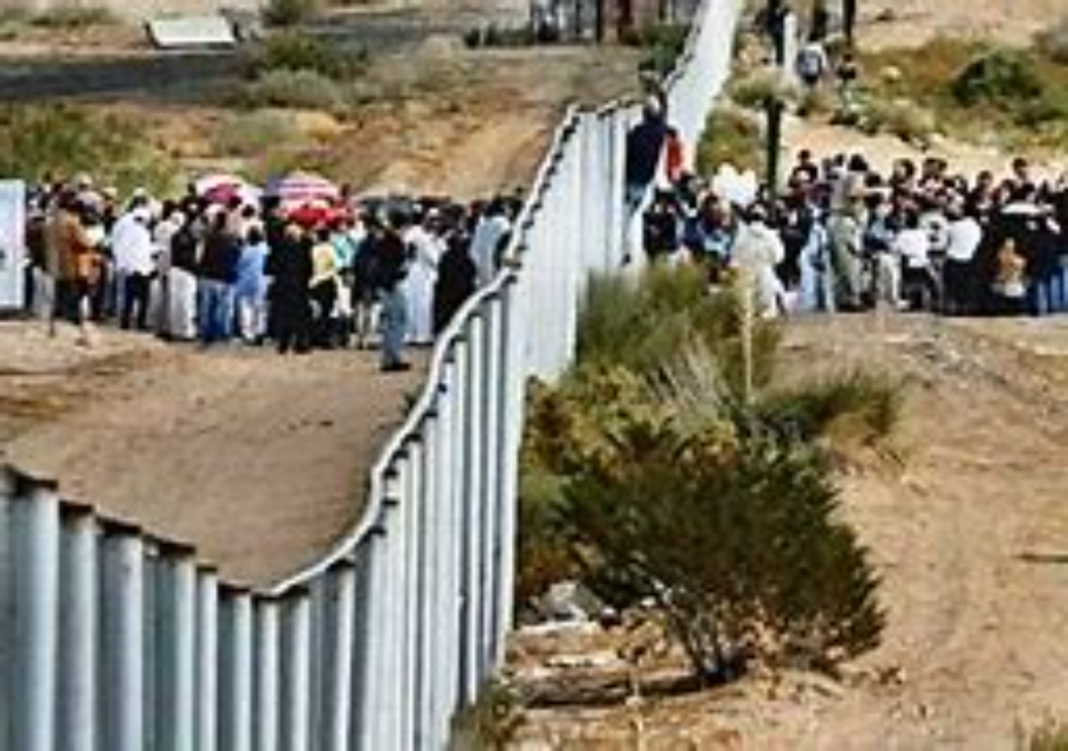 Unaccompanied minors are being housed at Fort Bliss, just north of El Paso, Texas. A temporary shelter was required at the Army base to accommodate the overwhelming number of children crossing the southern border. It is described as a tent city in the Texas desert. It currently houses 1,600 teenagers but can hold up to 10,000 if necessary. The huge spike in illegal migration since Biden took office quickly filled available shelters along the Rio Grande Valley border so the shelter on the base in El Paso – the far western part of Texas – was opened to ease overcrowding.

This isn’t the first time that Fort Bliss has been used to shelter illegal migrants. In 2014 the Obama-Biden administration asked for up to 10,000 beds there. Joe Biden, who campaigned on his vast years of experience from occupying a political office as a selling point for his qualifications to be president, seems to not have learned lessons on how to run a migrant shelter. At least not for teenagers, as the current detainees are not doing well. According to a report from CBS, teens are overcome with despair and depression. Some are of enough concern that they require one-on-one supervision 24 hours a day. Guards are banning such personal items as pens, pencils, nail clippers, and toothbrushes in an attempt to keep them from harming themselves. Guards report seeing girls and boys cut themselves. Some of the teens refuse to eat or spend the day sleeping on their cots. An internal document instructs workers to remove the metal nose clips from N95 face masks.

On Monday, a federal court declaration was filed.

In a federal court declaration filed Monday, a 13-year-old Honduran girl who had been housed at Fort Bliss for 58 days as of June 6 said some teens used their identification cards to cut themselves. She said she was placed on the “suicide watch list” along with 28 other youths.

The declaration document is seven pages long. The girl describes her experience leaving Honduras and up until her present circumstances in the Ft. Hood shelter. She described the 14 hour trip by bus from the border to El Paso. She describes a color-coded t-shirt system for shelter workers. Staff in yellow t-shirts are assigned to watch them “all the time.”

The teens say that they have gone from a small cage at the border to a larger cage at Fort Bliss. One federal government employee said of the shelter, “It’s a juvenile detention facility.” In May a group of teenagers tried to run away. In another incident, a group of boys protested inside of a tent for better living conditions. The detainees complain of the heat and of bad food.

It’s easy to brush this report off and think, oh well, this is what they get for coming here illegally. However, in most of these cases it is more likely that they were sent here by family members who paid a coyote to bring them to the border, or, worse still, sold the child to a human trafficker. The adults know that once an unaccompanied minor is picked up by Border Patrol, they will be allowed to remain here. Their mental issues during detention revolve around their length of stay at Fort Bliss.

Interviews with three federal volunteers, two private contractors, two lawyers and a member of Congress, as well as court declarations from minors in U.S. custody, offer the most detailed look yet at the distress endured by unaccompanied youth held at the tent city in Fort Bliss, the largest facility the U.S. government has ever set up to house migrant children.

The concerned federal employees, who volunteered to work at the site, requested anonymity to discuss their time at Fort Bliss because they’re still employed by other government agencies. The contractors were hired to work at the base by private companies and fear they could be fired for speaking out.

The workers said the children’s restlessness and frustration has been largely driven by prolonged stays at Fort Bliss. The children long to be with families in the U.S. but many languish at the Army base for weeks and even months with no updates on their release.

“There’s very little communicated to these kids about the process and amount of time they’ll be here,” another federal government employee who volunteered at Fort Bliss told CBS News. “So they live in constant doubt, uncertainty and fear about what’s gonna happen to them.”

Where is Kamala? When her office tried to downplay her role as Border Czar, they said her concentration is on family reunifications and on the root causes of illegal migration. Her office announced today that she will finally travel to Texas on Friday to visit the border. Here’s the thing – the real crisis is in the Rio Grande Valley where the majority of migrants cross the border. El Paso is at the western edge of the state. That is where Fort Bliss in so perhaps Kamala will stop by and see how everything is going. Most likely she will pretend as though the Biden policies are working wonderfully and deny the reality of the Biden border crisis. Any bets on whether or not Beto O’Rourke makes an appearance with Kamala in his hometown?

After all that, @VP isn’t even going to the right place. Here’s a map. pic.twitter.com/UpA02XLbEH