Roce Today – Politics, Opinions, Gun Rights,Pro-Life and Border Wall
Home Politics Sure, the Ukrainian refugee crisis is bad but wait until you see... 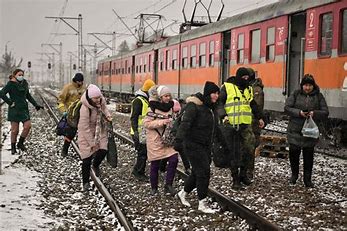 Earlier today I wrote about CERAWeek in Houston, a gathering of world leaders, oil and gas executives, and public figures. It is a yearly event with a 40-year history. As with everything in the energy sector, climate change is on the agenda. Biden’s climate czar, John Kerry, was in town to lecture the attendees on the coming flood of refugees. No, not Ukrainian refugees, but climate change refugees.

John Kerry, the U.S. special presidential envoy for climate, was the kick-off speaker at CERAWeek this year. Biden made Kerry’s phony czarship a cabinet position so he’s considered someone to listen to on the coming end of the world due to extreme weather, or something. Kerry was an architect of the Paris climate accord, an international agreement that was non-binding and leaned heavily on over-regulating the United States and giving the top world polluters, China and India, a pass on meeting certain standards. Shocker, I know. John Kerry is now trying to re-live his glory days of flying around the world on a private plane preaching about consumers making sacrifices to save the world. His own massive carbon footprint never seems to make it into his virtue-signaling lectures masquerading as energy policy. Biden put the United States back into the accord after a four-year absence during the previous administration.

In Houston, Kerry acknowledged the war in Ukraine and the refugee crisis that Russia’s invasion into Ukraine caused. It’s a “problem” he said but nothing in comparison to what will be coming when climate change escalates the number of refugees fleeing their countries because of a lack of food. You ain’t seen nothin’ yet.

“We’re already seeing climate refugees around the world,” he said. “If you think migration has been a problem in Europe in the Syrian War or even from what we see now, wait until you see 100 million people for whom the entire food production capacity has collapsed.”

U.S. Climate Envoy John Kerry: “We’re already seeing climate refugees around the world. If you think migration has been a problem in Europe in the Syrian war … wait until you see 100 million people for whom the entire food production capacity has collapsed.” #CERAWeek pic.twitter.com/JII1YOHWuR

Way to read the room, John. Kerry is an out-of-touch bubble-dweller who flies around on a private jet, owns multiple homes with his wealthy ketchup heiress wife, and fought the installation of wind mills off the east coast where his views of the ocean would be obstructed. I would be shocked if he didn’t travel to Houston on a private plane. He’s the stereotype of an old school limousine liberal. In an interview with BBC Arabic just a couple of days before Putin invaded Ukriane, Kerry absurdly said he hoped Putin would “stay on track” in the fight against climate change.

“But it could have a profound negative impact on the climate, obviously. You have a war and obviously you’re going to have massive emissions consequences to the war,” he said.

“So, you know, I think hopefully President Putin would realize that in the northern part of his country, they used to live on 66 percent of the nation that was over frozen land,” he said.

“Now it’s thawing, and his infrastructure is at risk and the people of Russia are at risk,” Kerry added. “And so I hope President Putin will help us to stay on track with respect to what we need to do for the climate.”

How’s that for showing concern for a peaceful country under siege by a brutal murderous dictator trying to put back together the old Soviet Union?

Kerry was flapping his gums about the effects of extreme weather which he blames on carbon emissions, a by-product of the modern world. His words don’t come from ideology and they aren’t his ideology, you see, it’s “mathematics and physics and science”. Remember the last time we were told by Washington elites that we must follow the science when the pandemic began? That turned out to be a devastating mix of a whole lot of politics and ideology. Take Kerry’s protest that it’s all about “energy security” and a “clean energy-based economy” with a very large grain of salt.

“We are driven not by politics, not by ideology,” he said. “We’re driven by mathematics and physics, by science, which tells us, and has been for 35 years or more, what will happen if we don’t do X, Y, and Z.

“And we have the advantage now of having Mother Nature herself share with us the realities of what happens if you don’t do the things that we’ve been talking about for 25, 30 years or more,” he added.

Kerry describes the war in Ukraine as a defining moment for this century. Not because of the fact that a country is fighting for its sovereignty against an attack from a nuclear power. No, it’s because now the price of energy will skyrocket and the world may have higher energy prices for a while. Where has this concern for energy prices been when he rambles on about green energy and alternatives like solar and wind that won’t be able to completely replace fossil fuel energy for decades into the future, it ever? How does he expect regular working class or low income people to afford electric vehicles? When the subject of climate change comes up and energy production comes into the discussion, the minds of progressives turn to mush. There is no real-world reality to be found.

“We are driven not by politics, not by ideology. We’re driven by mathematics and physics, by science. Which tells us, and has been for 35 years or more, what will happen if we don’t do X, Y, and Z.”

The thing is, when a politician says that “it’s not about…” something, that is exactly what it is about. Kerry’s climate change agenda has been around with liberals and progressives since 1973 and the first Earth Day celebration. Back then it was about global cooling. Now it’s the opposite. Man may play a part in the pollution in the air that causes some weather change but to act as though we must go back to pre-Industrial Revolution days to achieve purity is a false choice. The United States reached its goals of reducing greenhouse gases during the Trump administration, there is no need for an international agreement. Each country can act in its own best interests. That is an inconvenient truth you won’t hear Kerry say.

Dershowitz: Biden should call out ‘the intolerant mindset of many of...

Japan Signs Off On Record Defense Budget, Including Billions For American...