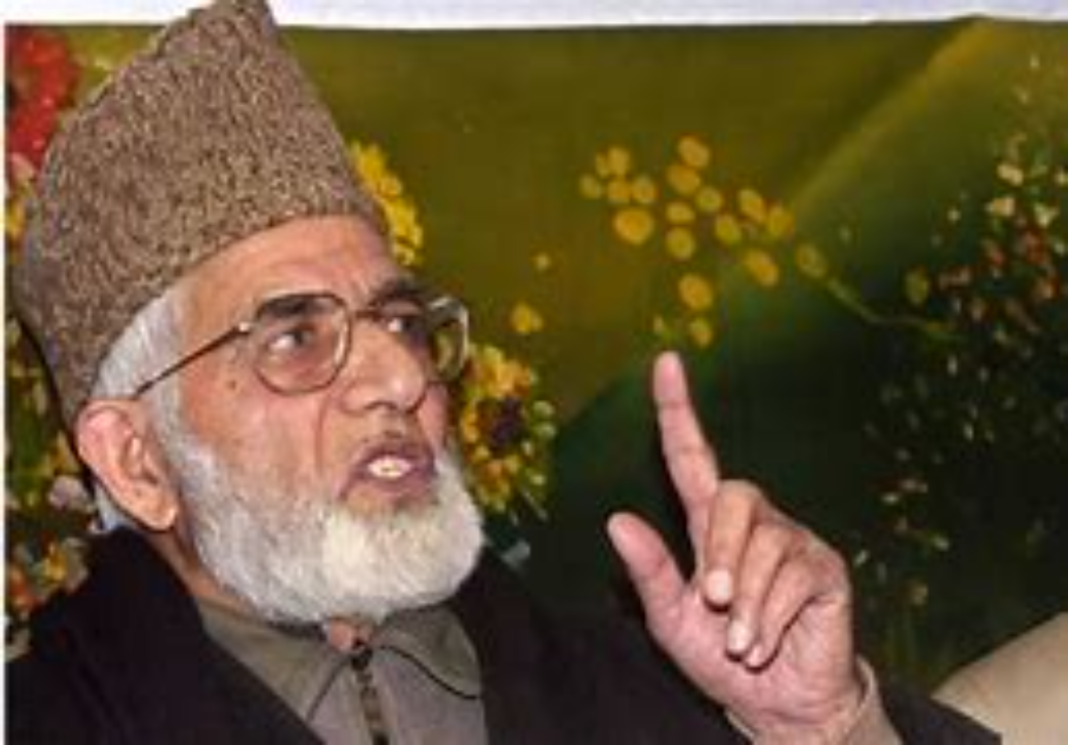 SRINAGAR, India (AP) — Syed Ali Geelani, an icon of disputed Kashmir’s resistance against Indian rule and a top separatist leader who became the emblem of the region’s defiance against New Delhi, died late Wednesday. He was 91.

Geelani died surrounded by family members at his home in Srinagar, the region’s main city, an aide and his relative told The Associated Press.

Shortly after the news broke, scores of Kashmiris converged at his home in the Hyderpora neighborhood of Srinagar to mourn the death of Geelani, who lived the final decade of his life mostly under house arrest and suffered from various ailments.

Authorities announced a communication blockade and the restriction of public movement, a common tactic employed by Indian officials in anticipation of anti-India protests. They swiftly deployed heavy contingents of armed police and soldiers across the Kashmir valley to prevent people from participating in Geelani’s funeral.

Troops with automatic rifles also blocked roads leading to Geelani’s residence, while armored vehicles patrolled the city neighborhoods. Despite restrictions, many mosques across the region’s towns and villages blared announcements of Geelani’s death and urged people to come out on the streets.

Geelani was an ideologue and a staunch proponent of the merger of Kashmir with Pakistan. Over the years, he had repeatedly said no to any talks with New Delhi, asserting that “India can’t be trusted unless it calls Kashmir a disputed territory, demilitarizes the region and releases political prisoners for a meaningful dialogue.”

The position was rejected outright by subsequent Indian governments, and he was often dubbed as a hardline politician.

Kashmir has known little but conflict since 1947, when British rule of the subcontinent divided the territory between India and Pakistan. Both countries claim the region in its entirety and have fought two wars over it.

Kashmir’s fury at Indian rule has long been seething. After a series of political blunders, broken promises and a crackdown on dissent, Kashmiri activists launched a full-blown armed revolt against Indian rule in 1989.

India describes the armed rebellion as Islamabad’s proxy war and state-sponsored terrorism. Most Muslim Kashmiris consider it a legitimate freedom struggle and support the rebel goal that the territory be united, either under Pakistani rule or as an independent country.

The region is one of the most heavily militarized in the world. Tens of thousands of civilians, rebels and government forces have been killed in the raging conflict.

Geelani, an Islamist author and a fiery orator, began his career as a schoolteacher and later joined Kashmir’s biggest religious and political party Jamat-e-Islami in the 1950s. He contested elections three times for local governance but resigned as a lawmaker to join the anti-India campaign in the late 1980s, becoming the face of Kashmiri resistance until his death.

He spent nearly 15 years in various Indian prisons and was also part of the All Parties Hurriyat Conference, a conglomerate of various Kashmiri political and religious groups that was formed in 1993 to spearhead a movement for the region’s right to self-determination. The group used civil disobedience in the form of shutdowns and protests as a tactic to counter Indian rule.

In August 2019, when India stripped the region’s semi-autonomy, Indian authorities harshly clamped down on the group’s leaders, detaining scores of them and barring them from leading public protests.

A sainted figure in Kashmir, Geelani’s popularity catapulted to near reverence after 2008, when the region witnessed mass civil uprisings and he emerged as a prominent resistance leader among the new generation of Kashmiris. In the years that followed, hundreds of youths were killed by Indian forces in street protests.

As civilian defiance against Indian rule picked up, Geelani, along with two other top anti-India politicians, Yasin Malik and Mirwaiz Umar Farooq, who remain under detention, formed “Joint Resistance Leadership” in 2016. The group challenged India’s sovereignty over Kashmir and sought to give direction to people’s anger.

During Kashmir’s recent years of civilian protests, the slogan “Na Jhukne Wala Geelani! Na Bikne Wala, Geelani! (Geelani, the one who doesn’t bow and can’t be bought!)” became almost a war cry on the streets. He was widely venerated by Kashmiris, who gave him a monicker of “Bub,” which means “the father.”

“While his death has come from natural causes, we must remember the immense physical and psychological toll that his continuous detention and torture took on his health,” said Stand With Kashmir, a U.S.-based Kashmiri diaspora-led international solidarity group.

Geelani was also widely respected by the region’s pro-India politicians.

“We may not have agreed on most things, but I respect him for his steadfastness & standing by his beliefs,” Mehbooba Mufti, the region’s former top elected official, said on Twitter.

Geelani’s maximalist approach forced India to court so-called moderate separatist leaders in Kashmir, though with no apparent breakthrough in resolving the dispute.

Pakistan’s Prime Minister Imran Khan said he was “deeply saddened” by Geelani’s death and the leader had “struggled all his life for his people & their right to self determination.”

Under Khan, Geelani was in 2020 awarded the “Nishan-e-Pakistan,” Pakistan’s highest civilian honor, an award earlier received by the likes of Nelson Mandela, Fidel Castro and Queen Elizabeth II.

“We in Pakistan salute his courageous struggle & remember his words: “Hum Pakistani hain aur Pakistan Humara hai (We are Pakistani and Pakistani is ours),” Khan said in a tweet.

Khan said his country will observe a day of official mourning on Thursday and the Pakistan flag will fly at half staff.

“Without doubt, Geelani was emblematic of our defiance of India that began in 1990,” said Siddiq Wahid, historian and former vice chancellor of a Kashmir university. “That is his legacy.”