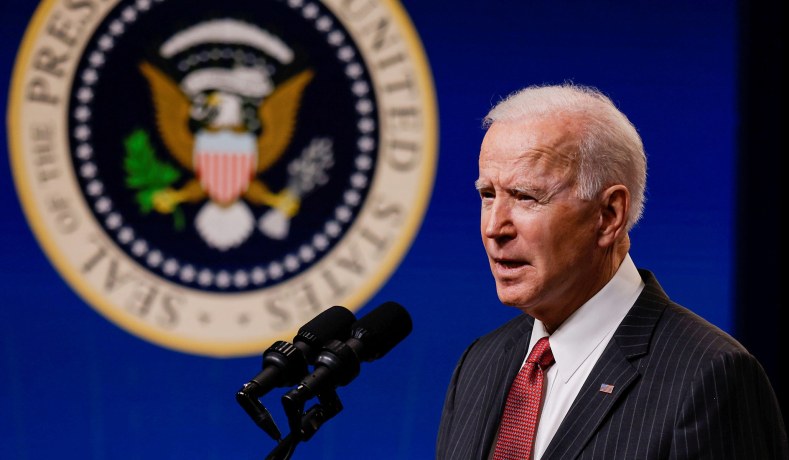 The critics of President Biden’s strikes on Iran-backed militias in Syria are already swarming. “Offensive military action without congressional approval is not constitutional absent extraordinary circumstances,” Senator Tim Kaine said in a statement this morning.

The administration quickly issued its legal justification for last night’s strikes — which the Pentagon confirmed were carried out as retaliation for an Iran-backed militia’s rocket attacks that wounded several Americans, including a U.S. service member. The National Security Council announced this morning that Biden acted under the authorities granted to him by Article II of the Constitution. “The targets were chosen to correspond to the recent attacks — the facilities are utilized by [the militias] — and to deter the risk of additional attacks over the coming weeks.”

This isn’t very surprising, considering his response to a 2019 questionnaire from the New York Times:

The Constitution vests Congress with the power to declare war and authorize the use of force. As is well established and as the Department of Justice has articulated across several administrations, the Constitution vests the President, as Commander in Chief and Chief Executive, with the power to direct limited U.S. military operations abroad without prior Congressional approval when those operations serve important U.S. interests and are of a limited nature, scope, and duration.

Although Biden also said later in his answer that action targeting Iran and North Korea would rise to the level of seeking congressional authorization, this reading of president’s authority here maps onto what presidents of both parties have long asserted.

Just consider the Department of Justice Office of Legal Counsel’s 2018 memo on President Trump’s decision to target Syrian government facilities after a chemical-weapons attack. The document runs through the history of executive–legislative relations on military action:

And that history points strongly in one direction. While our Nation has sometimes debated the scope of the President’s war powers under the Constitution, his authority to direct U.S. forces in hostilities without prior congressional authorization is supported by a “long continued practice on the part of the Executive, acquiesced in by the Congress.”

All of this sets the stage for a familiar debate about war powers that’s played out for years: The president takes action, members of congress complain that it exceeds the scope of his powers, and they do nothing.

Some commentators have suggested that Biden could invoke previous congressional authorizations to justify the strikes. Biden could invoke the 2002 Authorization for Use of Military Force, as Presidents Obama and Trump both did as the rationale for the anti-ISIS campaign and the Soleimani strike, respectively. With such a strained interpretation of the statute — it was, after all, intended to permit action against Saddam Hussein’s regime — Biden would be all but daring Congress to eliminate that authority. But if recent history is any guide, those efforts might also not go anywhere.

In recent weeks, progressive lawmakers have already set their sights on ending the 2001 and 2002 AUMFs (the 2001 statute authorized force against individuals and groups linked to the 9/11 attackers), and we can expect last night’s news to inspire further calls for this. But the prospects of rolling back these measures remain unclear, though Biden’s apparent decision not to cite either of the AUMFs could signal his desire to minimize his reliance on the statutes, potentially limiting his options for deterring Iranian-backed attacks in the future.

There’s also a more optimistic reading of these events for Iran hawks and proponents of a broad interpretation of presidential war powers: Citing either of the AUMFs could have exacerbated the political onslaught against the measures even more. And the decision to rely exclusively on his Article II powers for domestic legal justification could also suggest that Biden is asserting his war powers more broadly than if he were to also rely on congressional authorization. Until the administration offers a fuller explanation of the rationale for last night’s strikes, though, we won’t know for sure.