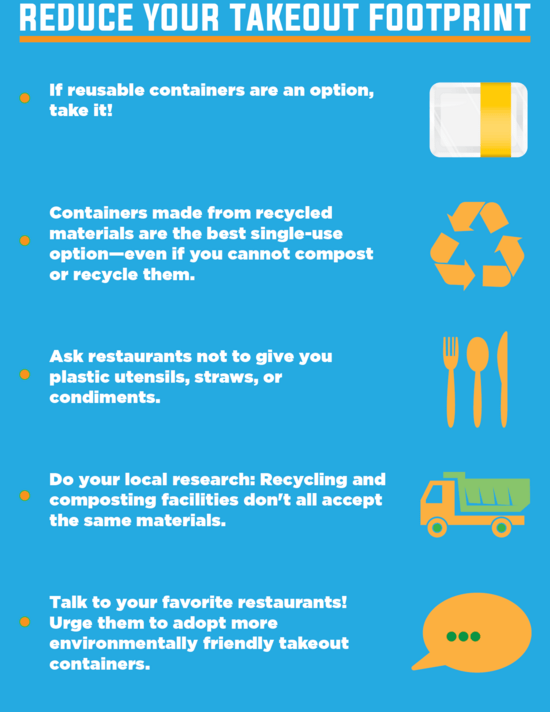 Before the pandemic, the U.S. was going through more than 100 million plastic utensils a day, and 120 billion disposable cups per year. Add to that the clamshells and pizza boxes, the plastic containers that have in so many cases replaced the old-school Chinese takeout box, and so many more forms of prepared food packaging—78% of disposable packaging comes from restaurants, according to one expert—and you’re talking about mountains of waste, much of which is straight-up not recyclable, and much more of which could theoretically be recycled, but won’t be.

Less than 9% of the plastic we use is ever recycled, China has stopped buying much of the waste from the U.S. it once bought, and many kinds of plastic can only be recycled once or twice, so even scrupulously careful recyclers can only do so much.

Composting sounds like a promising solution, and for food waste, it very much is. (Seriously, compost your food if you have access to facilities.) But compostable packages introduce a new set of problems. They are often resource-intensive to produce, and while corn-based PLA products degrade and go away in an appropriate composting facility, they don’t produce actual compost with its benefits. The “in an appropriate composting facility” part of that sentence is also key: Only several hundred composting facilities in the country are equipped for post-consumer food waste, and only a fraction of those are equipped for compostable packaging.

Compostable packaging can lead to other problems, too. Regular, nonexpert people—even those who really care about getting it right—can’t always tell which products are compostable, which are recyclable, and which are neither, leading to contamination and causing serious problems for both recycling and composting facilities. If there are too many unrecyclable things in a batch of recycling, the whole batch can be declared contaminated and unusable and thrown away. And since what’s recyclable or compostable varies from place to place depending on the facilities that handle those waste streams, it’s up to individuals to do the research on how to get rid of which packages in their specific areas.

So … plastic recycling is something of a mirage and compostable packaging doesn’t solve the problem. What next?

One big part of the answer is that it’s less about what you do with the containers and more about how the containers were manufactured to begin with. Ideally that means reusable containers, but there’s an obvious problem: Coffee shops that will give you a small discount for bringing a reusable cup are reasonably common, but few restaurants do takeout, let alone delivery, in reusable containers.

But! Services are starting to get off the ground doing just that.

GO Box, operating in Portland, Oregon, is a subscription service that provides reusable packaging at more than 100 restaurants, food carts, and other places you can get food. You then return the packages to drop sites. GO Box says use of its containers has replaced more than 200,000 disposable containers, or 16 tons of trash.

Green GrubBox is a similar service operating in Seattle. Exist Reusable operates in the Los Angeles area. Dispatch Goods is in San Francisco. At Dispatch Goods, which works with restaurant partners including the (delicious) salad chain Mixt and the James Beard award-winning Zuni, CEO Lindsey Hoell says, “We have now saved over 40,000 containers from entering the waste stream, which, if stacked, would be taller than 5 Salesforce Towers.”

These services remain localized and are collecting just a fraction of the takeout food packaging waste in those areas, but it’s important progress. When reusable containers aren’t an option, though, the principle remains that how much waste is created and how containers were manufactured matters a great deal.

In 1992, John Schall authored a working paper at the Yale School of Forestry and Environmental Management assessing the solid waste management hierarchy by considering both production systems and solid waste management itself. His research, drawing data from the New York City municipal waste stream, pointed directly to the importance of source reduction. “The environmental impacts of making packaging (or other things) out of primary/virgin materials was many, many, many times greater than the environmental impacts of making packaging out of secondary or recycled materials,” he explains now. “And although there were environmental benefits that came from the solid waste system by recycling and composting materials instead of burying or burning them, they were much smaller than the environmental benefits of making things from secondary materials vs. primary materials.

Fast forward to the present, and Schall is now a restaurant owner who was doing a big takeout business even before the pandemic. At his El Jefe’s Taquerias in Boston and Cambridge, Massachusetts, and Bethlehem, Pennsylvania, he uses the lessons of his previous career in solid waste management research, choosing recycled molded pulp cardboard containers for most menu items. The containers are compostable, but the environmental benefits of their manufacture are there no matter what the customer does with them. And, he notes, there are no fully recycled plastic takeout containers available.

Identifying environmentally friendly options takes work, though, and it costs more. “We built this concept with a mission of being sustainable and being environmentally friendly, but it’s real easy to just go onto your online ordering portal and just order the cheaper deli container or to-go container,” Brian Corbey, the chef at Boston’s Lulu Green, a sustainability-focused cafe and juice bar, told The Boston Globe.

As an individual consumer, you can also ask restaurants to leave out plastic utensils, condiments, and straws whenever possible, pulling a surprising amount of single-use plastic out of the waste stream and benefiting the restaurants themselves. “Believe it or not, restaurants can save thousands of dollars by doing that, so it’s a win-win,” the Green Restaurant Association’s Michael Oshman told The Boston Globe.

Restaurants that put in the work and make the most environmentally friendly possible choices (from a bad set of options) should be rewarded, but we can also try to encourage improvements on a larger scale. That can mean asking our favorite restaurants to invest in better packaging—politely, of course, and with the intent to reward those that do so with not just business but great word of mouth. It can also mean encouraging our local and state governments to pass laws encouraging greener packaging.

While this isn’t a problem with individual solutions, the sheer amount of waste that can be produced by one family’s orders of problematically packaged takeout makes it worth paying attention to. Finding a balance between public health during the pandemic, supporting our local restaurants, and reducing the harm we do to the environment is a tricky task. But ultimately, that has to be the goal.