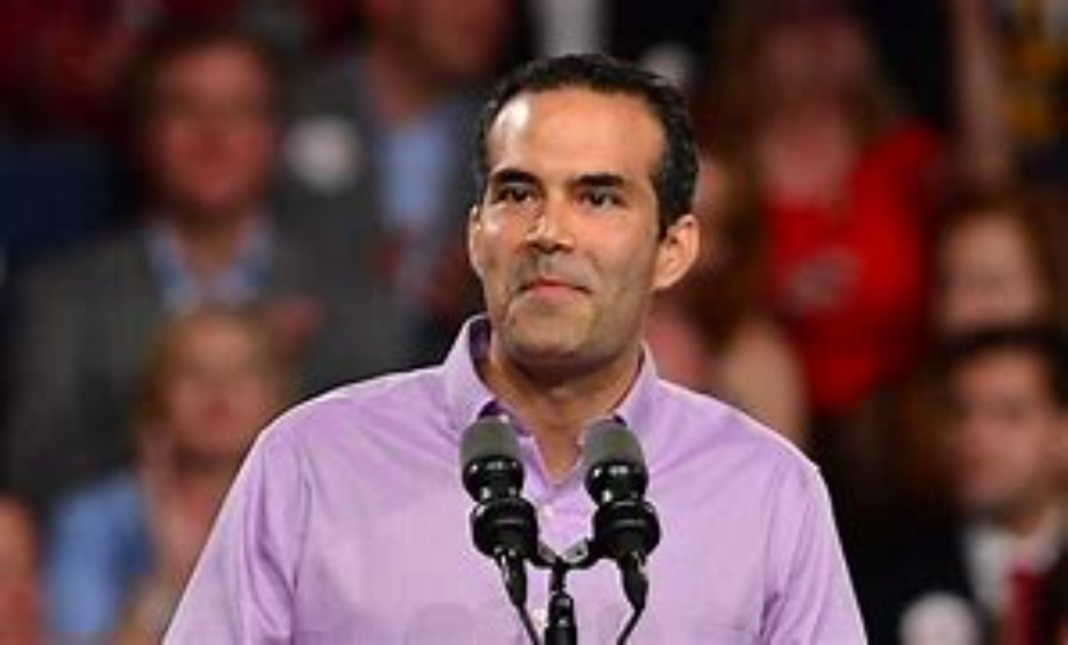 George P. Bush is running for the job of Texas Attorney General, challenging the current attorney general, Ken Paxton. What better way to make a splash in the news than for Bush to announce filing a lawsuit against the Biden administration and Department of Homeland Security Secretary Alejandro Mayorkas? George P. Bush is the current Texas Land Commissioner. The Texas General Land Office (GLO) filed the lawsuit today.

“On behalf of the people of Texas, I’ve instructed my agency to file a lawsuit against President Joe Biden and also Secretary Mayorkas, of the Department of Homeland Security,” stated Bush.

Texas owns approximately 591,595 acres along the Texas-Mexico border. GLO will partner with local officials to build the border wall.

The news of this lawsuit is breaking as I write this. George P. Bush held a news conference Wednesday morning in Rio Grande City. The lawsuit is over the unused funds appropriated by Congress for border wall construction. Bush staged the news conference on a 3,100-acre property in Starr County. The border wall is left unfinished on the property.

Some slats still lay on the ground close to the nearly 1-mile wall constructed under the Trump administration and halted by the Biden administration.

The lawsuit is specific to the 3,100-acre property and focused on the president’s power to divert funds previously allocated by Congress.

The complaint filed with the Southern District of Texas stated, “this lawsuit is not about whether border walls are effective. It is about whether a President may unilaterally override these duly enacted appropriations bills to fulfill a campaign promise.”

In other words, Bush and the GLO want the money Congress allocated for border wall construction and say that Biden had no power to stop the project in the first place. Biden ran on not building another mile of the border wall and in his first days in office, signed an executive action putting a halt to its construction. This move that puts politics over border security left contractors hanging and residents along the border were left with incomplete sections of the wall. The lawsuit specifically addresses the property in Starr County on which Bush stood. The GLO asks that the court enjoin DHS from stopping work on the border wall.

For four years Congress set aside $5B for construction of the wall, Bush said. “Each year, congress signed that legislation into law…Joe Biden and Secretary Mayorkas have refused to spend those dollars and to finish the construction.” He said that the border wall behind him, left unfinished, had proven destructive to the farmer who leases the land. “This is wrong, it’s illegal and it’s unconstitutional… To be clear we are utilizing dollars that were appropriated for the wall to not be spent for not constructing the wall.” Biden has two choices: “follow the law or see your day in court.”

Bush referenced the loss of revenue for schools, too. The revenue from land leases brings in income for Texas public schools.

“Unfortunately because of the skyrocketing amount of illegal immigration, which includes human trafficking and drugs smugglers… we’ve seen a determinantal value to the leasing of this land.”

Bush also asked the Federal Court in the Southern District of Texas to declare relief for the State of Texas on the basis of border security. The National Border Patrol Council leadership agrees it is of benefit to Border Patrol agents to finish the wall.

“To declare that the actions of President Biden and Secretary Mayorkas as illegal, unconstitutional, and unjustified,” said Bush. “We want to see the border wall project continue to keep our community safe here in the Rio Grande Valley…”

Bush justifies the lawsuit on constitutional grounds. He wants the funding that Congress appropriated for the wall to be spent on the wall’s construction, to finish the job that was started.

“But more importantly on the understanding of the constitution, that the President needs to follow the laws and expend the rest of those dollars that were appropriated to finish the wall and help our Border Patrol, ” said Bush on the lawsuit.

The lawsuit also asks for declaratory and injustice relief.

“If we’re successful on those grounds, basically it would compel the federal government to spend those dollars and at minimum would require the president to not divert those appropriated dollars to other sources other than the specific intent,” explained Bush.

We’ll see where this lawsuit goes from here. In the meantime, fundraising is going well for Bush’s campaign for attorney general.

That means he outraised incumbent AG @KenPaxtonTX and fellow primary challenger @TexansforEva, whose campaigns have said they raised $1.8M and $1M over the same period, respectively.