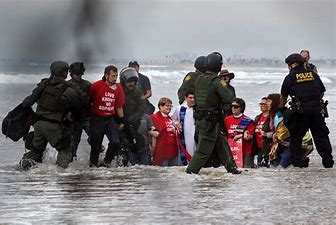 An unprecedented agreement between Texas and the Mexican state of Coahuila has been reached. Texas will provide c-wire (concertina/razor wire) to Coahuila and provide training to Mexican authorities on its use. This agreement is the latest action taken by a border state to slow the flood of illegal migrants crossing the southern border from Mexico. Texas is doing what the Biden administration refuses to do.

Coahuila is across the border from Eagle Pass, Texas. In the coming days, Mexican officials will come to Eagle Pass. They will be trained by the Texas Military Department, take possession of the razor wire, and bring it back to Mexico. This is the first time Texas officials and Mexican officials have struck a deal to work together on border enforcement.

#BREAKING @TXMilitary soldiers are on standby to cross international waters to provide razor wire to Mexico— This would be the first time U.S. forces would be working alongside Mexican Feds since the influx began last year.

This is the preparation order: pic.twitter.com/ZL3nyiPEkY

Razor wire is already going up along the border in Eagle Pass to stop the large groups of migrants that have been crossing there recently.

The Texas National Guard is starting to place razor wire in the area where we’ve witnessed massive groups crossing into Eagle Pass, TX for the last several days in a row. They’ve just started breaking ground and are in the process of putting the first of many coils up. @FoxNews pic.twitter.com/qCuOx3rAwH

According to Fox News reporter, large groups crossed the border at Eagle Pass each day like clockwork. It’s the work of cartels.

BREAKING: Another enormous group of well over 100+ is crossing illegally into Eagle Pass, TX right now, right in front of a US Border Patrol boat.
This is the fourth day in a row we have seen a group of this size crossing here.
There have been 8+ in the last week. @FoxNews pic.twitter.com/C8iTPBezOy

A short time before this group crossed, we saw a suspected cartel scout on the Mexican side of the river in the exact same spot where the crossing took place.
Every day at around 11am here these huge groups have been crossing. Cartel human smuggling clockwork. @FoxNews pic.twitter.com/4Ts5cRLwvf

In April Governor Abbott took some drastic measures in order to bring the Mexican governors of border states to the table. He wanted more cooperation from them in providing border security. The Biden administration continues to ignore pleas from Abbott and other American border state governors for help in controlling record numbers of illegal migrants. Abbott reached out to Mexican governors himself. His tactics may have critics but there is no denying that Abbott got the results he wanted – all four governors of Mexican states on the southern border met with him and agreed to step up efforts in border security. Coahuila is one of those Mexican states that was involved in talks with Abbott.

Immigration policy is the responsibility of the federal government yet Sleepy Joe is leaving border states to fend for themselves. The lack of will to curtail illegal migration on the southern border has provided illegals an open invitation. With the end of Title 42 approaching on May 23, DHS is allegedly preparing for the number of apprehensions to triple. The question is, if DHS has not been able to handle the Biden border crisis to date, why are we expected to believe DHS will be able to handle a massive spike in an already disastrous situation?

Abbott began a border wall project in 2021 and some sections of the border have been secured using razor wire.

The Treasury Department has opened an investigation into Abbott’s use of coronavirus funds to pay for border security. A group of Texas Democrats in the U.S. House called on Treasury Secretary Janet Yellen to investigate. A Washington Post analysis showed that Texas “leaders rerouted public health and safety funds to their border operations, while relying on federal pandemic funds to replace some of the money.”

Those border operations included Operation Lone Star, a state border security program that Abbott launched in March 2021 to deal with increased border crossings. The initiative involves the deployment of the Texas Department of Public Safety and the Texas Military Department to the border. Abbott has used state resources to patrol the border, build border barriers and arrest migrants for trespassing on private land and then turn them over to immigration authorities.

The state has spent around $4 billion on the operations; the Post has reported that around $1 billion in coronavirus aid was used.

The money came from the Coronavirus Aid, Relief and Economic Security Act, better known as the CARES Act, which had a key provision to support the medical response to the pandemic.

“In exercise of that responsibility … we are currently conducting a review of Texas’s uses of [Coronavirus Relief Fund] monies,” Richard K. Delmar, the U.S. Treasury Department’s deputy inspector general, said to the Washington Post.

Ironically, this week Biden suggested that states use COVID-19 funding to hire more police officers to help reduce crime. Crossing the border illegally is a crime. Biden has not provided enough Border Patrol agents or law enforcement personnel to handle the flood of illegal migrants. Biden has no real solutions. He should take steps to reintroduce the policies and agreements made by the previous administration that worked to curb illegal migration but he is too stubborn to admit his actions have failed Americans. And, frankly, he just doesn’t care. Biden encourages illegal migration and is working to provide blanket amnesty to all those who can cross into the country. It’s a dereliction of duty.