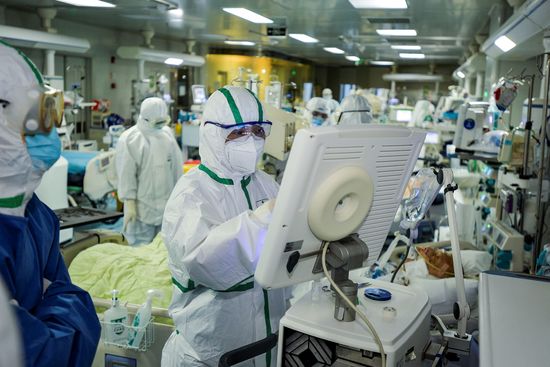 From the very start the “Chinese virus” appellation was intentionally amplified by American right-wing media. It’s a slur which almost revels in its senselessness. To be clear, even if the virus actually had man-made origins—even if the virus been created in Xi Jinping’s basement with a vintage Gilbert chemistry set—from a practical standpoint, the precise origin of the virus, be it bat, bald eagle or Beijing lab, is essentially irrelevant.  Whether the virus originated in China, Kenya, or Wyoming is distinct from the question of how the global community has responded to it, which is what ultimately matters.

That distinction is what Trump’s favorite slur tries to obfuscate. The tragic reality is that the U.S. response to the COVID-19 pandemic was atrocious compared to nearly every other developed nation in the world. It was so bad it turned this country into a pariah nation, a cautionary tale of what not to do in a public health crisis.

And that abysmal response, whose ineptitude and human cost will doubtlessly fill the history books for the next hundred years as an example of what failed, indifferent government policies can lead to, was due almost entirely to an abdication of responsibility towards the American public by one of this country’s two major political parties. Republicans were the ones responsible for electing, abetting and encouraging an Executive uniquely and pathologically unsuited to addressing the catastrophic implications of a global pandemic. Republicans  were the ones who stood by silently, while our public health infrastructure and pandemic response capabilities were being gleefully dismantled by the the Trump administration. And Republicans of every stripe must bear the ultimate responsibility for the consequences of that failure, whether they choose to admit it or not.

Only recently, as the nation finally begins to extricate itself from this calamity, is a reckoning of sorts coming forth. The most up-to-date estimates place direct blame on Donald Trump for approximately 400,000 of the deaths that have occurred to date due to COVID-19. There is literally no president in American history whose malfeasance resulted in so many deaths of U.S. citizens.

But Trump didn’t act alone. The death toll was increased exponentially due to the sycophancy of a Republican establishment lined up behind him, adopting his cues as the pandemic’s impact continued to worsen. Every Republican  at the state and federal level who acquiesced to the former administration’s malfeasance either by parroting lethal anti-masking propaganda, forcefully advocating reopening businesses in the name of “personal freedom,” or hawking phony cures and ridiculous conspiracy theories is complicit.

So the appeal of the slur to Republicans, however irrelevant to the actual harm caused by the SARS-CoV-2 virus, is easy enough to understand, because it serves as an ready distraction from the blame they so richly deserve for allowing a public health crisis to become a calamity. The entire approach by the Trump administration was intended to abandon any leadership role of the federal government, and thereby escape blame for any failure to stop it. As pointed out by Josh Marshall, writing for Talking  Points Memo,  this exercise in blame avoidance was intentional, a key to the administration’s overall strategy when faced with its own ineptitude.

From the very start of the Pandemic in the first weeks of 2020 the Trump administration consistently sought to disclaim responsibility for things that would be genuinely difficult and could have challenging or bad outcomes. Push the tough tasks on to others and if it goes badly blame them. This frequently went to absurd lengths as when the White House insisted that states short on ventilators at the peak of the spring surge should have known to purchase them in advance of the pandemic. Over the course of the year Trump spun up an alternative reality in which the US was somehow still operating under the Articles of Confederation in which individual states were responsible for things that have been viewed as inherently federal responsibilities for decades or centuries.

But the impetus wasn’t ideological. It was mainly a means of self-protection and risk avoidance: arrange things so that the administration could take credit if things went well and blame states if they went bad. Nowhere was this more clear than in the months’ long crisis over testing capacity. Since the administration was actually hostile to testing in general and couldn’t solve the problem in any case they simply claimed it was a state responsibility.

As Marshall points out, the one constant during Trump’s entire botched handling of the COVID-19 pandemic—from the first warnings of an incipient health crisis through and including Trump’s final day in office—was “to put it off on someone else so the White House didn’t get the blame.”

Attributing the pandemic to China or Wuhan, or the rally staple “Kung flu?” That was always a calculated part of Trump’s attempt to avoid blame, one which immediately filtered down to the state level and was adopted by Republican officials equally eager to dodge blame. Even following a year of racially-motivated attacks on Asian Americans that resulted from this distraction campaign, most House Republicans still refused to condemn Trump’s rhetoric.

As detailed by Alex Samuels, writing for FiveThirtyEight, the vilification of China had its desired effect among the Republican constituency.

Ultimately, blaming China for the pandemic didn’t help Trump win reelection in 2020, but unfavorable views of China are at a record high among Americans.1 And there are signs that Americans, especially Republicans, blame China for the spread of the coronavirus. A November Economist/YouGov poll found, for instance, that 64 percent of all registered voters and 86 percent of Republicans said it was definitely or probably true that China was responsible for the pandemic.

The key word for Republicans here was “responsible.” Republicans recognize that Donald Trump and those GOP officials that adopted his strategy throughout this crisis were ultimately responsible for the U.S. sustaining a higher death toll from this virus than any other country in the world. As Samuels notes, that fact practically compels them to find a scapegoat for their own failure, with any blowback inflicted on Asian-Americans a secondary consideration at best.

[T]he experts I’ve talked to think that if people uphold a specific worldview by delegitimizing another group, the framing of diseases will always be political — no matter how apolitical we think diseases are. That’s because racism itself is a disease, and as Roger Keil, a political scientist at York University, told me, “[I]t seems to spread sometimes like a virus.” Keil compared it to watching a video online: “For every video that links the disease to Chinese people, there will be 10 or 1,000 people watching, so it’s normalized,” he said. “It’s terrible, but that’s how racism spreads.”

The Trump administration knew the implications of COVID-19,from the outset and that it presented his prospects and those of his minions with a truly daunting, existential crisis. The China scapegoating began immediately and continued throughout the rest of Trump’s tenure, heedless of whatever harm such scapegoating would have on millions of Asian-Americans. Republican leaders willingly followed his lead and have continued to do so up to this day. But every time one of them utters the words “Chinese virus” or “Wuhan virus,” what they’re really doing is dodging their own responsibility for the worst response to a major public health crisis in this nation’s history.