Home Politics The Battle of the Arm Brace 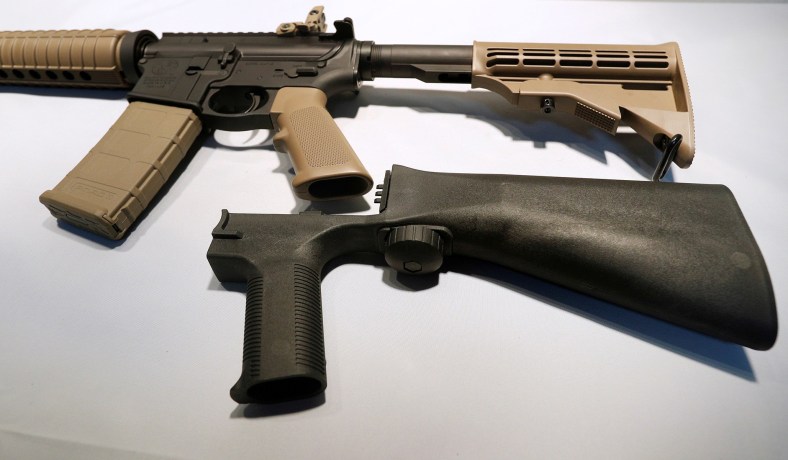 Every so often, some very strange and exotic-seeming financial instrument goes bust in a categorical fashion, and people ask: “Why does this thing even exist in the first place?” The answer is almost always regulation, if you drill down far enough. This isn’t to say that regulation is categorically bad or that we shouldn’t regulate finance, only that regulations produce reactions. Credit-default swaps, for example, are a way of providing default insurance on bonds and other debt obligations in a way that avoids some regulatory hassles.

As it is in structured finance, so it is in firearms. The “bump stock” used by the Las Vegas killer is one of many inventions meant to get around the restrictions on fully automatic firearms, which as a practical matter amount to a general prohibition. The firearm the Boulder shooter used is described as an AR-type pistol with an arm brace. These exist mainly as a way to get around federal restrictions on “short-barreled rifles,” which you can buy only if you satisfy a cumbrous qualification process and comply with extensive regulations.

There isn’t really any good reason to restrict short-barreled rifles: Shorter barrels usually result in less power and inferior accuracy — they generally are less deadly than their full-sized counterparts. Shorter rifles are easier to conceal, but not as easy as a handgun.

AR-style “pistols” of the sort used in Boulder are basically short-barreled AR rifles with the shoulder stocks removed. They aren’t really handguns, though they are classified, sold, and regulated that way. They are not easy to shoot well, and so aftermarket innovators have created a number of devices to help with that, including “forearm braces” that can be used, if you are so inclined, as an uncomfortable improvised shoulder stock, which in my experience is what about 99.44 percent of shooters do. It’s a short-barreled rifle in all but name, a product that evolved in the marketplace in response to federal restrictions.

Rifle cartridges are generally more powerful than handgun cartridges, but there are lots of exceptions. There are revolvers, for example, that fire rounds considerably more powerful (as measured by muzzle energy) than the 5.56mm rounds typically found in AR-type rifles.

So, expect to hear demands for new restrictions on arm braces or on “assault pistols.” Like expanded background checks, such restrictions would be unlikely to have any effect on mass shootings and almost certainly would have zero effect on the nontheatrical violent crime that makes up the bulk of American criminal violence.

There are things that Joe Biden could legally, ethically, and intelligently do — today — to address shootings. The U.S. attorneys who refuse to prosecute most ordinary straw-buyer cases all work for him. So do the guys over at the ATF who can’t be bothered to go pick up an improperly transferred firearm when they erroneously approve a sale. Biden instead is calling for unworkable and unconstitutional measures that would provide excellent opportunities for culture-war skirmishes but would do nothing to stop the bloodshed.

He could — if he could be bothered — order the people who work for him to do their damned jobs. That is a thing that could happen. That it isn’t happening — that it hasn’t already happened — is how you know the Biden administration is not serious about this.

The US economy is in a perplexing state of labor market...