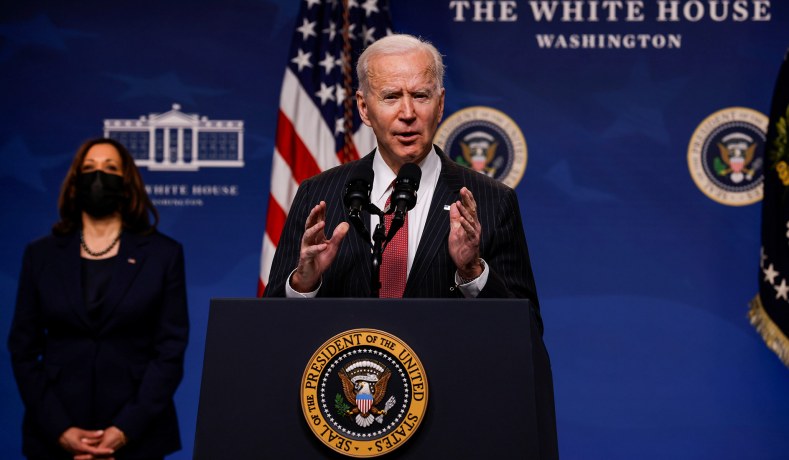 Jonathan Last has a piece out at The Bulwark arguing that the Biden administration’s schedule could be a little different than its predecessors’. While most presidents use their first 100 days in office to push through their major initiatives, Last says that Biden is “laser focused” on its COVID response right now. But “by the fall he could be in a position of political strength and ready to spend that capital on legislation” if the pandemic has been done away with. I have some issues with how this is framed. Is the Biden administration really “laser focused” on defeating the virus? It’s squandering most of its capital and energy on a wasteful spending bill that ostensibly addresses the pandemic’s effects, but in truth doles out goodies to its favorite interest groups. Its nominee for Secretary of Health and Human Services is an unqualified abortion enthusiast. It’s also backed the Equality Act, put the kibosh on the Keystone Pipeline, and issued executive orders allowing for the use of taxpayers dollars to fund organizations that perform and evangelize for abortion abroad. To Biden’s credit, COVID has been a focus messaging-wise, but to say he’s been solely and selflessly worried about the good fight against the coronavirus is more than an overstatement. Last also preemptively credits Biden with America’s eventual triumph over the disease. I’m sure the work his administration has done will have something to do with that victory, but it should be pointed out that it’s Donald Trump’s administration that came up with Operation Warp Speed and developed the vaccines.

In any case, Last moves on to suggest that Biden should pursue voting reforms with this hypothetical capital he will have (fairly or not) accrued. I’ll let Last speak for himself:

The Republican party is a minority party. It has won a national plurality once since 1989, a period of minority status that compares more or less with that of the Democrats following the Civil War.

The Republican party has no prospect for regaining majority status. At some point in the indefinite future, such growth might happen. But it is far enough over the horizon as to be unseeable right now.

Because the Republican party has no way to win a majority, it only has two paths to power:

These truths are so obvious that many Republicans no longer even attempt to deny them. They stipulate that in order to have even a chance of winning power, they must decrease the percentage of citizens who cast votes. And you see the party moving to put this into practice legislatively, at the state level, across the country.

Which means that the most important front in the pro-democracy movement will be pushing back against this tide and expanding the zone of voter protections at all levels.

More than healthcare or climate change or unions or abortion or any of the other fights that capture our attention, voting rights will be the most important battle of the A.C. era.

That’s the hand on which, if he is wise, Biden will push all of his chips into the center of the table.

There are hidden assumptions in this argument. One is that a majoritarian, winner-takes-it-all democracy would be preferable to the piecemeal federal republic that we live in. The GOP has not won a national plurality since 1989? This is true of the race for the White House, but Republicans have had great success in the House, Senate, and state races over the last three decades. It seems rather convenient to ignore these victories while pointing matter-of-factly to his current side’s success on one playing field alone. Moreover, while he may have a problem with the Electoral College, the fact remains that it is how we select our presidents and it therefore serves as a guide for how our parties and candidates prepare to win control of the executive branch. It’s hard to say how our politics — and election results — would differ if we had a popular vote system. David French has argued this point well in the past.

Next, he says that the GOP has no shot at regaining “majority status” — again, what this means, exactly, is unclear — and ipso facto must be “leveraging geography” (I think this is a reference to the GOP’s understanding the Electoral College system and its basing its political strategy around it) and suppressing votes. He doesn’t provide any examples of either save for an article in which Trump riffs about mail-in voting. It is true that Republicans do enact laws related to election integrity in many states. Some, I think, are cynically aimed at lowering vote totals. Some, I think, are good-faith efforts at preserving the integrity of, and faith in, our elections. But I don’t think the broad and nefarious brush stroke with which he paints all election-oriented GOP action is fair. I’m also not convinced that there’s any inherent virtue in a political system with high voter turnout regardless of voter quality, but I’m with Last insofar as his argument is that it’s wrong for a party to erect barriers to voting for their political opponents. I just disagree that any and all requirements should therefore be done away with.

I share Last’s evaluation of Donald Trump, and am similarly alarmed by the state of the Republican Party, but I think his argument in this instance is more partisan fan-service than clear-eyed assessment.

US Trade Deficit Falls Sharply For First Time In 6 Months