Roce Today – Politics, Opinions, Gun Rights,Pro-Life and Border Wall
Home Politics The consequences of an absence of trust with the COVID-19 vaccine 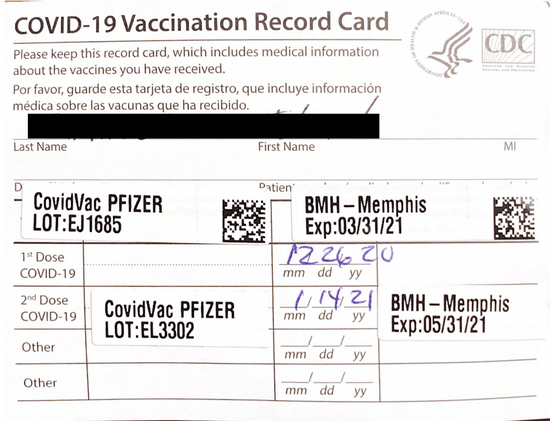 I am now among the roughly 2% of Americans who have been inoculated against COVID-19, specifically with the Pfizer vaccine, in my case. My own experience getting the vaccine has been informative, in both seeing aspects of supply problems, and how I’ve seen some of the social issues surrounding the vaccine, including among my colleagues in healthcare. The experience, and the reactions I’ve seen to the rollout in general, are connected to a growing loss of trust in institutions and officials in an age where truth and fact are under assault.

As a healthcare worker, I was given priority access to some of the first available doses. The mechanism for obtaining the vaccine here in Memphis was relatively straightforward. We were notified that, as employees of and contracted workers for the major hospital systems in the city, we could register with their online portals and schedule an appointment for the first dose. The vaccination itself was also relatively quick and painless. I spent more time in the mandatory 15-minute post-vaccination observation, where the freshly-inoculated wait for a possible allergic reaction, than I did filling out paperwork and scheduling my second dose. The only side-effect I had was a sore arm, similar to soreness of a flu shot; it was worse on the second dose, to the point of being uncomfortable enough to disturb my sleep for a day or so. Some of my friends and co-workers had slight fevers and swollen lymph nodes, but nothing serious.

Overall, I have no complaints about the experience.

Admittedly, not all of my coworkers can say the same thing. As news of vaccine supply shortages started to make headlines, some of the workers whose responsibilities are moree the administrative side of things were denied the vaccine when they showed up to their appointments. While they were told it was a clerical issue about who counts as a “contracted” worker within the hospital’s system, the grapevine is full of rumors about doctors working that system to get their children vaccinated; one administrator told me a particularly appalling rumor, about a doctor procuring access for the members of their child’s bridal party. Additionally, as reports from other areas of the country have indicated, some hospital systems are offering special access to the vaccine for wealthy donors; here in Memphis, the local CBS affiliate has covered people in long lines at the county health department’s vaccination site—only to be turned away.

People waiting in line at a Memphis COVID-19 vaccination site Tuesday night say they were turned away because they ran out of the vaccine. Our cameras captured the long lines of people waiting in their vehicles at the Pipkin Center. We are told some people were sent home after waiting for hours. The health department responded in a statement, saying: “The Shelby County Health Department is committed to vaccinating as many persons as possible as quickly as possible. Today more people than expected presented at the Pipkin Building to receive vaccine. This resulted in an increase in the number of vaccines delivered. However, there was also an unexpected increase in wait times.

“Additional staff will be scheduled to address the issue,” the department said.

Also, as reflected in early rollout statistics, many of my fellow colleagues of color have expressed everything from apprehension to outright rejection of the vaccine. This mirrors the vaccination participation rates in many states, from Pennsylvania to Florida and Mississippi, where doses given to people of color lags behind those administered to whites. The office administrator of the clinic where I work is a young, amazing, African American woman … who doesn’t “trust” the vaccine enough to take it. Many of the nurses and medical assistants I work with, who are African American or Hispanic, have not been vaccinated. They show no desire to get the vaccine, and state they “may” get the COVID-19 vaccine “some day.”

Recent polling from the Kaiser Family Foundation (KFF) indicates about a third of the African American community would probably or definitely not get a coronavirus vaccine. While troubling, this is actually an improvement, since African-American confidence in whether the vaccine will be distributed fairly has doubled from 32% to 62%, when compared to a similar poll last September. About half (48%) of Black adults state they have concerns the vaccine is deficient in addressing the needs of their community and are more likely than whites to cite the “newness” of the vaccine and “side effects” as reasons to refuse it. Also, the KFF surveys suggest that misinformation spread across all media platforms affects this issue.

Importantly, about half of Black adults who say they probably or definitely won’t get vaccinated cite as major reasons that they are worried they may get COVID-19 from the vaccine (50%) or that they don’t trust vaccines in general (47%), suggesting that messages combatting particular types of misinformation may be especially important for increasing vaccine confidence among this group.

All of this becomes even more tragic when one factors in the fact that Black, Hispanic, and Native American people are dying from COVID-19 at nearly three times the rate of whites. Healthcare workers of color like myself are also more likely to contract COVID-19—and die from it—than our white counterparts. African Americans are also more likely to live in multigenerational households, which in turn heightens the risk of exposure to elderly people of color. Additionally, everyone knows how not-diverse the trials were.

All of this is indicative of what decades, if not centuries, of systemic racism has wrought: An at-risk population distrusts the vaccine for a disease that is killing them in disproportionate numbers. From Tuskegee to maternal death rates, the system offering it has screwed them over too many times; further, that system screws up in every possible way, reinforcing the skepticism.

An article by Hannah Recht and Lauren Weber in Scientific American, detailing racial disparities in vaccine distribution, explained how janitors in a hospital were neglected. It makes one want to just stare at a wall in disgust for hours … or just punch it, if that’s how you roll.

Dr. Taison Bell, a University of Virginia Health System physician who serves on its vaccination distribution committee, stressed that the hesitancy among some Blacks about getting vaccinated is not monolithic. Nurses he spoke with were concerned it could damage their fertility, while a Black co-worker asked him about the safety of the Moderna vaccine since it was the company’s first such product on the market. Some floated conspiracy theories, while other Black co-workers just wanted to talk to someone they trust like Bell, who is also Black.

But access issues persist, even in hospital systems. Bell was horrified to discover that members of environmental services—the janitorial staff—did not have access to hospital email. The vaccine registration information sent out to the hospital staff was not reaching them. “That’s what structural racism looks like,” said Dr. Georges Benjamin, executive director of the American Public Health Association. “Those groups were seen and not heard—nobody thought about it.”

In many ways, this crisis is indicative of the enduring cost of the Trump presidency, as well as decades of the conservative culture war on government, science, and truth.

Society is held together by tenuous threads of trust. The very nature of a social contract is dependent upon individuals of common interests believing they can trust each other, and institutions, to do great things and advocate on their behalf. But we’ve spent years being fed “both sides” stories, which paint every politician as a liar. Conservative propaganda has painted the government as “the enemy,” and a decadent system that steals and wastes taxpayer money—all while being a “threat” to freedom. This demagoguery has led to fanatics who claim to love America but hate Americans and their government so much they tried to overthrow it in January.

And therein lies the problem, for those whose trust issues extend beyond Donald Trump into deeper issues within this society. It’s like a relationship where the partner has been unfaithful. Maybe trust can be rebuilt, but it’s never quite the same. People want to believe the best, but then they think about all the times they’ve been disappointed, hurt, and treated like they were nothing and the threads holding it all together snaps. If we want to be a society that builds great things and makes a difference for our people in meaningful ways, there has to be a rebuilding of faith in what it means to be an American and what this country can do.

How about you? How do you feel about the vaccine?