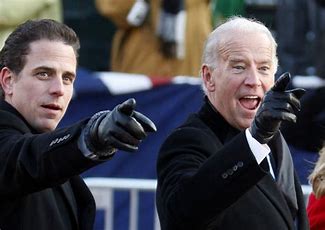 The investigation against Hunter Biden is really heating up and the questions being asked before the grand jury are getting closer and closer to Joe.

According to reports, a grand jury witness was asked who is the “big guy” that’s being mentioned in Hunter’s correspondence on his first planned deal with a Chinese energy conglomerate…

We all know it’s Joe.

The New York Post reported that the question arose after the witness was shown a piece of evidence while appearing in secret before the panel in Wilmington, Del., a source familiar with the proceedings told The Post.

A bombshell email exclusively reported by The Post in October 2020 showed that one of Hunter Biden’s business partners, James Gilliar, outlined the proposed percentage distribution of equity in a company created for a joint venture with CEFC China Energy Co.

Another former Hunter Biden partner, US Navy veteran Tony Bobulinski, later revealed that “the big guy” was Hunter’s dad, then the Democratic candidate for president, saying, “I have heard Joe Biden say he has never discussed his dealings with Hunter. That is false.”

Hunter Biden disclosed he was under investigation for his “tax affairs” shortly after his dad was elected over former President Donald Trump in the 2020 election, but the probe broadened to include potential money laundering and the violation of lobbying laws, according to recent reports.

In the wake of last week’s report by the Washington Post — which confirmed $4.8 million in paymentsfrom CEFC to entities controlled by Hunter Biden and first brother James Biden during 2017 and 2018 — the White House on Sunday attempted to distance the president from his under-scrutiny kin.

Here’s Fox News also talking about the investigation and the increasing connection to Joe:

Now, this email and the information provided in it are nothing new, right?

After all, it was revealed back in October 2020, but as we all know, the media and big tech suppressed the heck out of the entire story, so these questions never arose.

But thankfully it’s being investigated now and, I’d guess the Biden family has gotta be sweating bullets right now.