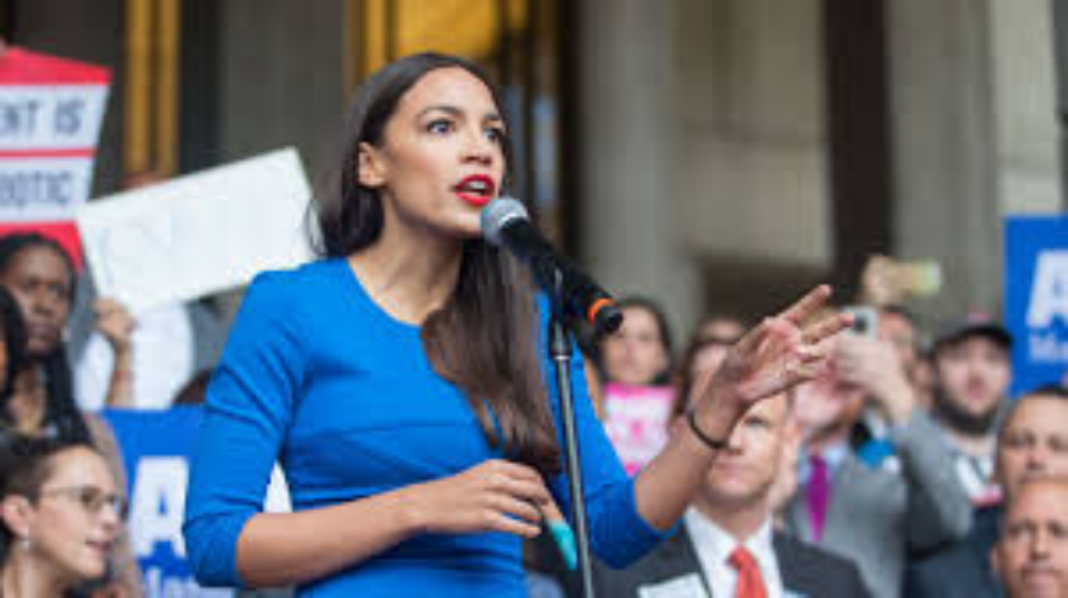 Remember way back in February of 2019 when AOC helped launch the Green New Deal? Along with the resolution itself, her office also handed out copies of a GND FAQ which said some pretty wild things about support for people “unwilling to work” and about expanding high speed rail to “a scale where air travel stops becoming necessary.”

AOC’s office got a lot of blowback on that and later claimed it was all a mistake but a lot of us took it as a peek into what the far left would really like to do if they thought they could get away with it. The idea of making air travel unnecessary was one of those ideas that stuck as a kind of literal pie in the sky idea.

Today the NY Times published a piece about air travel as a climate problem for which there is no good solution.

“It’s a big crisis, it’s a pressing crisis — a lot needs to be done soon,” said Jagoda Egeland, an aviation policy expert at the International Transport Forum, a unit of the Organization for Economic Cooperation and Development. “It’s a hard-to-abate sector. It will always emit some carbon.”

Experts say commercial air travel accounts for about 3 to 4 percent of total U.S. greenhouse gas emissions. And while planes become more efficient with each new model, growing demand for flights is outpacing those advancements. The United Nations expects airplane emissions of carbon dioxide, a major greenhouse gas, to triple by 2050. Researchers at the International Council on Clean Transportation say emissions may grow even faster.

Before the pandemic, a “flying shame” movement, which aims to discourage air travel in favor of greener options like rail, was gaining ground globally thanks to Greta Thunberg, a Swedish climate activist. There were early signs that it may have reduced air travel in Germany and Sweden. Now French lawmakers are considering a ban on short flights that can be replaced by train travel.

But assuming Greta Thunberg’s “flying shame” plan doesn’t work, what are the alternatives? The Times reports that some smaller planes could eventually run with electric motors but for larger planes and longer distances, that’s not an option. That leaves basically three options for the foreseeable future. One is to use renewable jet fuel, something that some US airlines are already buying. But the scale of its use is still tiny compared to the overall consumption:

Neste produces 35 million gallons of renewable aviation fuel and hopes to reach 515 million gallons annually by the end of 2023 by ramping up production at refineries in Singapore and Rotterdam, the Netherlands…

But it is important to put those numbers in perspective. U.S. airlines used more than 18 billion gallons of fuel in 2019…

Even if it were used universally such fuel only cuts the carbon emissions by 30-50%. Option 2 is carbon capture from the atmosphere – something that doesn’t exist as a mature technology yet and something many environmentalists dislike because it seems to run counter to their push for an all-renewable economy.

The third option is carbon offsets, something the Times suggests doesn’t really work:

The benefits of some offsets are difficult to measure — it’s hard to know, for example, whether landowners would have cut down trees had they not been paid to preserve woods, a common type of offset. Mr. Kirby, the United chief executive, is skeptical that such offsets are effective.

“Traditional carbon offsets are a marketing initiative; they’re greenwashing,” he said. “Even in the few cases where they are real and are making a difference, they’re just so small that they can’t scale to solve the global problem.”

Bottom line: There’s just no clear path to renewable air travel at this point in time. But some of the readers weren’t satisfied with that conclusion and offered their own suggestions.

How about STOP FLYING? Is that European be trip worth destroying the planet for your kids? Americans say Yes!!!

I can’t tell if this next person is serious:

Poor peple can’t afford to fly as it is

With all air travel bamned we would be happily equal. It would be like utopia Instead of flying to europe or the beach you could just watch beach and European scenery on a travel channel on television

The people want to fly . Put them in hot air balloons and save the air and water for the future generations. To do nothing and let this climate abuse continue in unacceptable. I stay out of dangerous covid filled air planes and you should to. That will save our climate.

This one is more serious:

There is a solution: reduce demand. Impose (UN, IATA, Paris Agreement v2, whatever) a worldwide price increase on ticket of 1000%. That money should be used for the development of zero-emission transportation on the continents. No more intercontinental tourism and no more in-person corporate/business meetings.

But several people took it even beyond ending air travel. They want to end children.

there is zero probability any large mammals will survive the century, because of what we have ALREADY DONE
no one, anywhere, ought to have children, anymore, to minimize the numbers who face the end.

unless we come up with policies and methods to limit population growth, indeed reduce world population, nature will step in with its own methods – then the current Covid pandemic will seem like a picnic in the park…

You get the idea. There are people out there who are already on board with ending air travel and some for whom only the most extreme dystopian measures are considered radical enough.